Weather fine after heavy rain on preceding days. The flood field does now have a small pool in it but nothing like in previous winters, pre-draining.

- waterbirds were pretty scarce but lack of quantity was made up for in quality - nine beautiful crisp goosanders and a kingfisher kingfisher kingfisher! There on the canal behind my house and studio when I set out at 9am, there again or still when I returned around noon. Sometimes difficult to spot, rust-red chest blending into dead winter undergrowth when it perched. Then when it flew its metallic blue back flashed like a jewel.

Actually, that's a crisp packet. It was almost immediately after I'd taken this photo that I spotted the real kingfisher.

- Fieldfares and redwings all around, as last month. Larger flocks now, at least 100 fieldfares and 50 redwings, taking full advantage of the red berries of canalside hawthorn hedgerows.
N.B. If you haven't tried hawthorn berries you should. They have a nice nutty creamy texture and taste. Take care not to crunch on the big stone in the middle. Don't eat them all though, the thrushes need some.


All water birds eligible for count:

Nothing on the flood field


In the woods, heavy flow:

A Very Happy Sprouty Christmas To You All

Posted by Leo du Feu Painter of landscape and nature at 3:33 pm No comments:


A glowering black blue bruised sky was pressing the landscape low as I waited at Stirling station. The Wallace Monument was dark when my train pulled out. The Allan Water, a favourite walk for me, my mum and my brother Roan, from Bridge of Allan to Dunblane, was in pounding high torrent.

Beyond Dunblane, briefly north then a steady north-east until Gleneagles, the Allan Water is still alongside. Here it meanders, carves deep curves through a wide and gentle U-shaped valley. As we proceeded the sky gradually lightened from "is it dusk already.." to a more usual heavy overcast. I watched the river and surrounding land. Two crows flew up. Two lapwings joined them, spooked by the train I think. A buzzard slid from a railside fence post. Twenty five or more pink footed geese on a green grass field, a bit later another group of similar number lighted on fresh ploughed dark clods. A bridge takes the train over that miniature hidden valley - blink and you miss it. I always think to make an expedition to find and explore it.

The two platforms at Dunkeld & Birnam station are low, really low. There are a couple of two-step mounting blocks on each but jumping down is rather fun. When you come out of the station - don't panic. That's the A9. It's full and fast but we rail users have an underpass - turn left and a sloping path leads down and under. There's a little burn and on it was a dipper. It stopped its splashy foraging, looked, thought, decided, and flew. Whirring away from me upstream, flying only a couple of inches above the water.

Beatrix Potter loved Birnam. She holidayed here with her family in the second half of the 1800's and wrote her original Peter Rabbit letters whilst staying in a rented home on the Dunkeld side of the water. Birnam village green is a little wooded park. Sculpted creatures forage among the bushes. These are for you Jennifer:


I got a cakeaway from the cafe in the Birnam Arts & Conference Centre - cherry scone and a latte. I browsed the shop and exhibition and didn't, this time, go around the Beatrix Potter museum. The coffee was in the nicest 'to-go' cup I've ever seen. Here it is, with another nice thing, The Birnam Oak, in the background. The Birnam Oak is ancient, a relic of the medieval Birnam Wood that once grew all around these hills and valleys and played such a part in Shakespeare's Macbeth. A red squirrel scampered down its trunk as I left.

I didn't see as much wildlife as I had expected. Partly due to the weather -overcast and often drizzling- and partly, probably, because I was always in woodland. Woodland is great habitat but it's difficult for the watcher to spot things in. There's so much cover! I saw tits, chaffinches, woodpigeons, corvids. I heard bullfinches softly calling and heard then saw a V of geese overhead. I still can't identify geese by call. Don't know if they were saying 'pink-pink' or 'wink-wink'... They flew over, northbound, until out of sight. They must have turned because almost immediately they were back above me, heading south.

There was also a kingfisher. What a bird! I saw its blue flash. Mostly that's all you see but this time I was lucky. It perched a few tens of metres away on a low-hanging branch then flew, across the river but not much farther off. It perched again, now on a sticky-up black stump. I got this photo through binoculars and cameraphone before it whizzed downstream.

A big salmon was in the water, the best view I've ever had. I don't know about fish but I know it was a salmon. It was probably about two feet long and covered in lots of crusty white marks, like scabby growths. It also looked like its jaw had a portion missing. The National Park & Preserve Alaska (!) say this is a fungus - "Fish protect themselves from infections with a thick layer of slime that covers their scales. When that slime layer is removed, the salmon becomes vulnerable to fungal infections. Typically the slime layer is removed by improper handling from an angler, from commercial fishing nets, and/or other the physical hazards of migration."

I saw another salmon, dead, lying by the path. In fact just half a salmon. A second was down on an islet, flesh partially pecked away.

My inspiration for today - Cameron McNeish

The inspiration for this particular railway day was a mention by Cameron McNeish in The Herald Magazine. He writes a great little half page column ever Saturday, map and walk description, somewhere in Scotland. On 7th December it was a walk near Dunkeld and decided to follow it. The problem is that Cameron doesn't work sketching time and stopping-to-look-at-every-bird-tree-fungi-and-stone time into his schedule, so his 5 mile in 3-4 hours walk would probably take me double! I didn't manage his circle, skirting back through the trees of Craigvinean Forest and past the folly and waterfalls of The Hermitage (though I did see follies). My walk was from Birnam upstream on the south-becoming-west shores of the River Tay for about 4km then back by the same route.

I stopped twice to paint. First only a mile or so into my walk, just west of the views across to Dunkeld Cathedral. I was attracted by the black eyes and mouth of a folly on the opposite shore - screw my eyes half shut, in the way of artists everywhere, and I could see these as the darkest areas of the scene. Firs and deciduous trees towered above and their reflections towered below. I sat here and worked on two pieces. The first, an A5 pencil underdrawing then watercolour on top, was rained off and is still to be finished. The second is closer to finished. Watercolour only, no underdrawing. Started, and nearly completed in the rain.


The sound of shooting was echoing through the hills most of the time I was sat painting. I find it difficult to understand that anyone can take pleasure in shooting animals. Towards two o'clock it stopped. Perhaps time for their sandwiches. Pheasant and hare anyone? 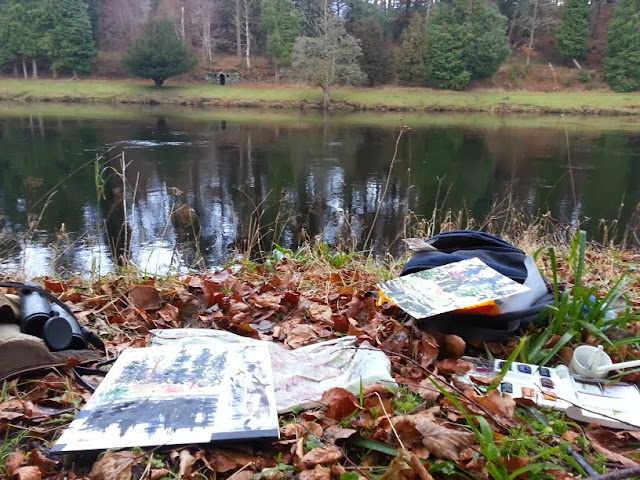 Later I found two perfect glass bottles peeking out gem-like from a pathside bank. An old dumping ground. Here they are cleaned up. My favourite is the one on the left. I'd like to know what they may have contained..? 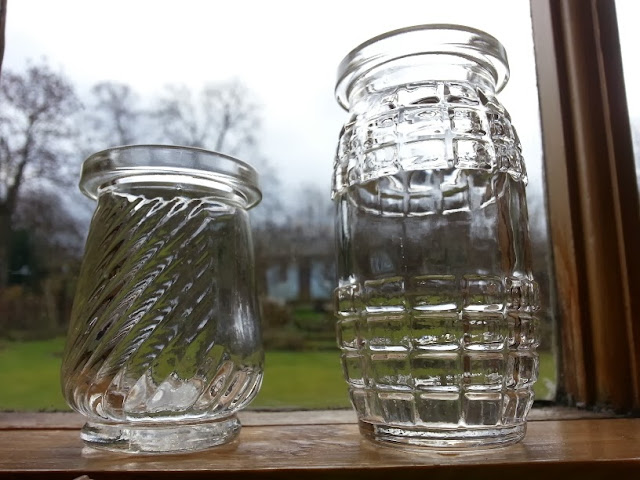 The second painting was an hour before the train. Dusk was firmly upon me when I saw a reflected scene of Dunkeld Bridge - all blues except four yellow bridge lamps and their corresponding water columns of sulphur. I had half an hour leeway so I sat down again to paint. Coloured pencils and watercolour.


Dunkeld and Birnam are lovely places to visit. There are walks in all directions, river and hill and woodland. Dunkeld & Birnam railway station serves both villages. I didn't cross the bridge to Dunkeld this time. That will follow in a future post. 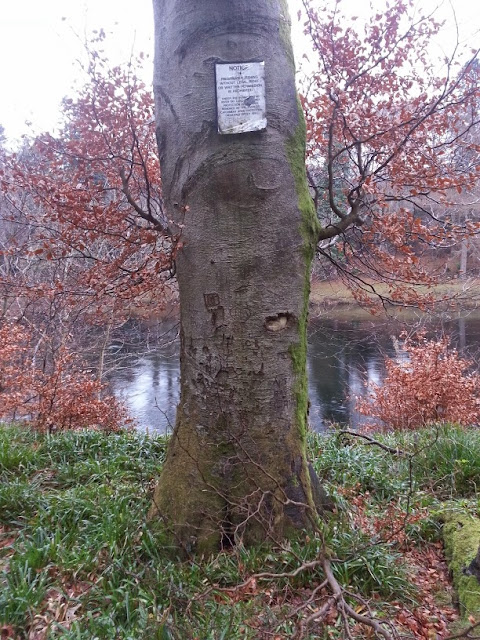 How to get there by train


Posted by Leo du Feu Painter of landscape and nature at 12:37 pm 1 comment:


Staying with our Pitmedden friends, between a fancy dress horse show with my cousin's daughter and the village Christmas lights switch-on with our hosts and their children, I managed a morning to myself, walking, birding, painting.


I did the Pitmedden - Udny Green circle. Starting through the woods of Pitmedden Gardens; onto tall old beech avenue (lots of these round here, feeling ancient); the road towards Udny Green past Udny Castle (stopped and sketched it in watercolour and pencil - the main plan for my walk); round the green of Udny Green, past Studio on the Green and Eat on the Green; along country road and across field to the little hedgerow tunnel track that leads back to Pitmedden Gardens woods. Stopped just before the House to do a watercolour of pool, reflections, lime kilns and fallen leaves.


On the road to Udny Green a buzzard flew down, far off, landed on the verge and started to peck a roadkilled rabbit.


A roe deer bounded away from me across a newly ploughed field, bright white rump completely obvious against dark brown soil.

A bit later a second buzzard, or the same one, flew directly towards the narrow stand of trees that I was beside. It didn't spot me until the very last minute and I watched it get closer and closer until yellow razor beak and piercing eyes filled my binoculars.

A fieldfare chacked in a beech, the only one I saw or heard all morning.
Skeins of geese, or individuals, flew overhead several times, as they do all the time in the north-east in winter.

By the path near the kilns a man was dozing with his alsatian. It wasn't dozing. Luckily it was friendly, but I didn't know that as it barked and bounded towards me. Owner and I walked along towards the kilns together, talking of local castles.

Then lunch, then carols, then Santa giving out free chocolate. Fireworks to finish.

Posted by Leo du Feu Painter of landscape and nature at 7:08 pm No comments: