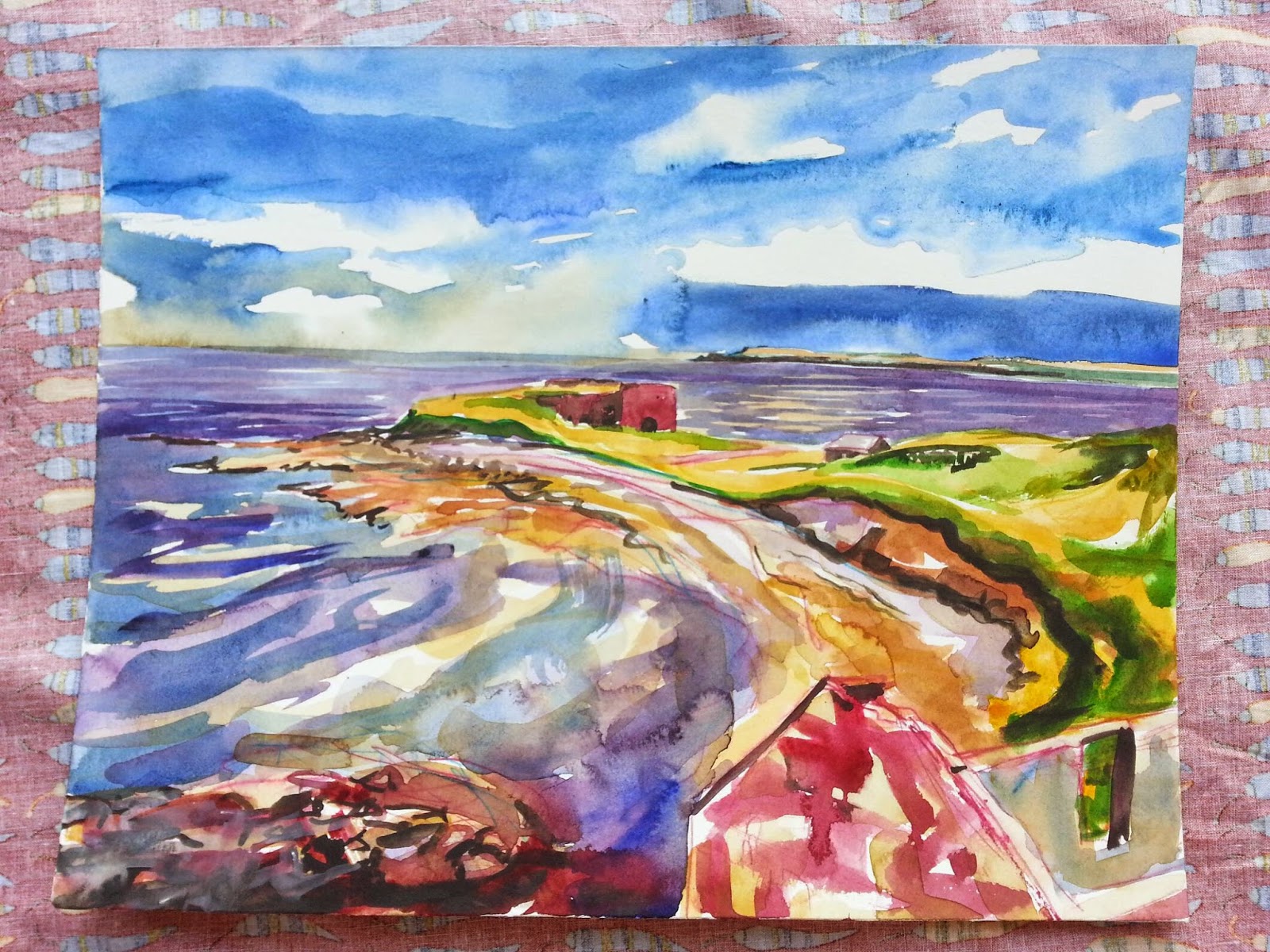 A family and art week in the caravan in Montrose. Me, mum, Roan, Ian. Walking and cycling and a good deal of sketching and painting - including Roan doing his first paintings for eight + years. Peterhead family coming to visit.

There are always loads of gulls and eiders and, in summer, terns, but only ever a few gannets, fishing far out or flying swiftly past. One morning the sea was far in and turbulent and gannets were all over, presumably following a shoal. In an undercount I got three hundred, a mix of browny-plumaged juveniles and white-black adults with their mustard heads. Most were close in and riding the waves or performing semi-horizontal gliding dives to cope with shallows. 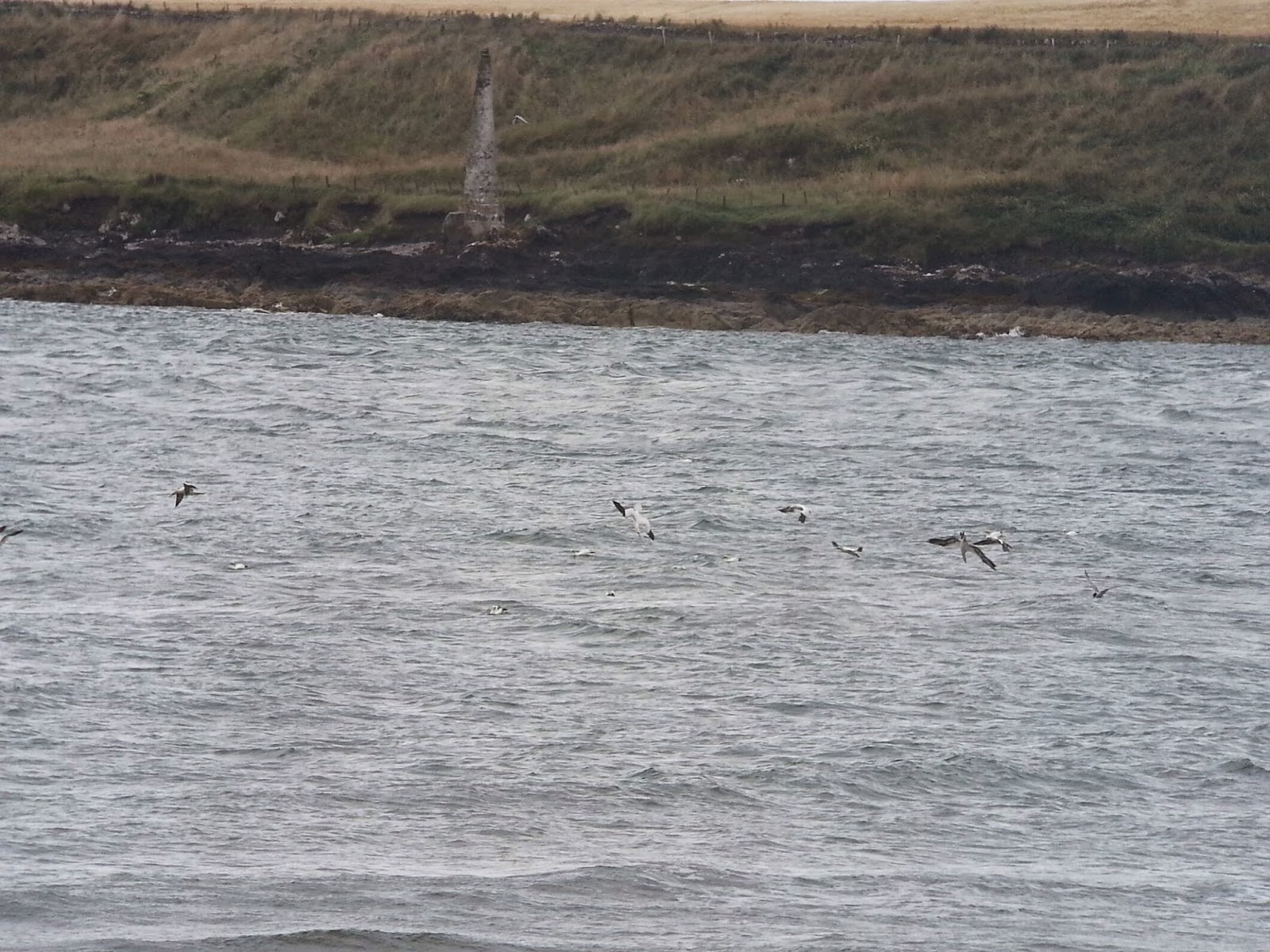 The same day there was a bi-plane over the airfield, marking a centenary. Loop-the-looping through grey wet haze. 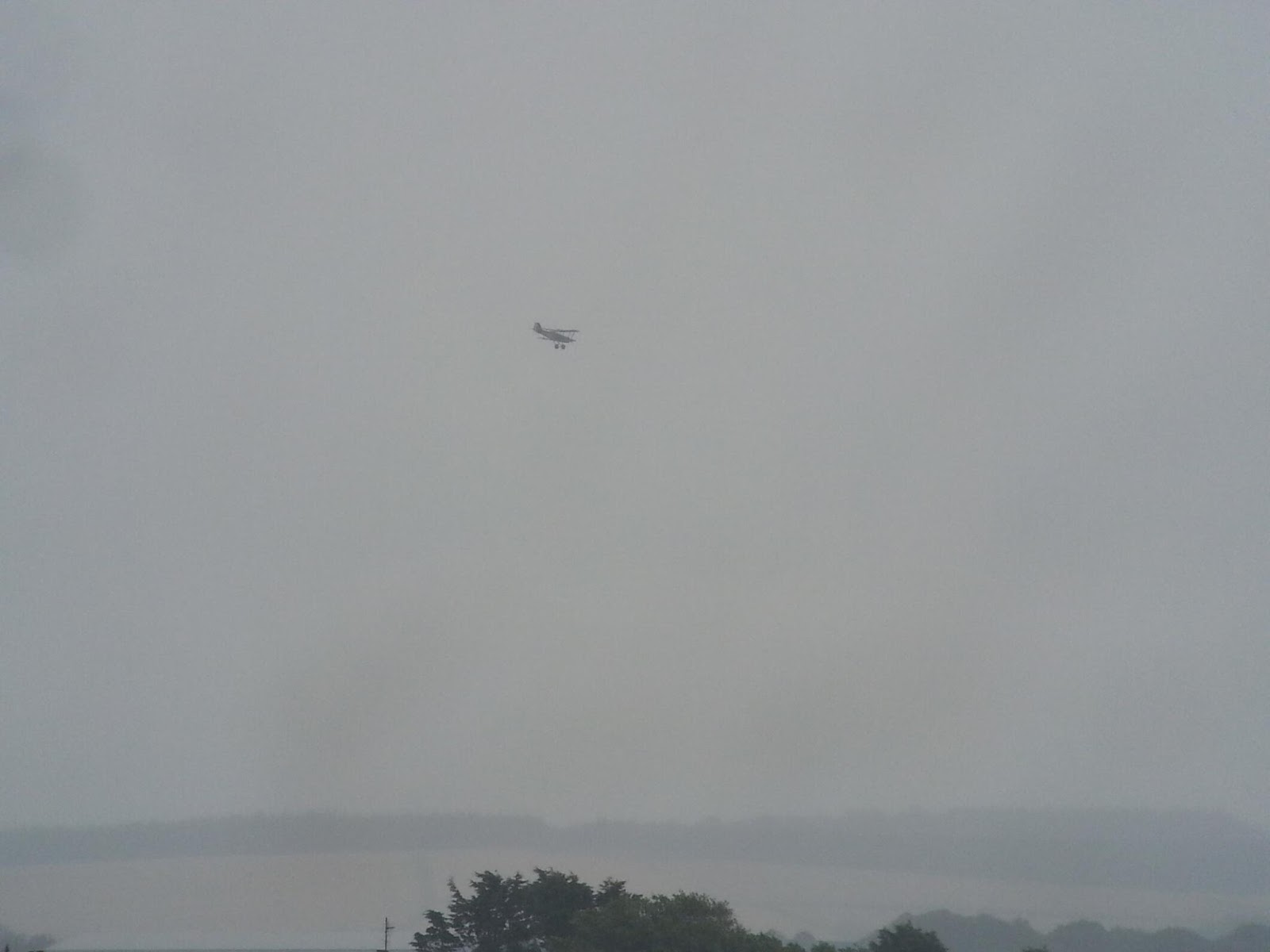 Cousin and cousin's husband Gemma and Danny visited with the kids. 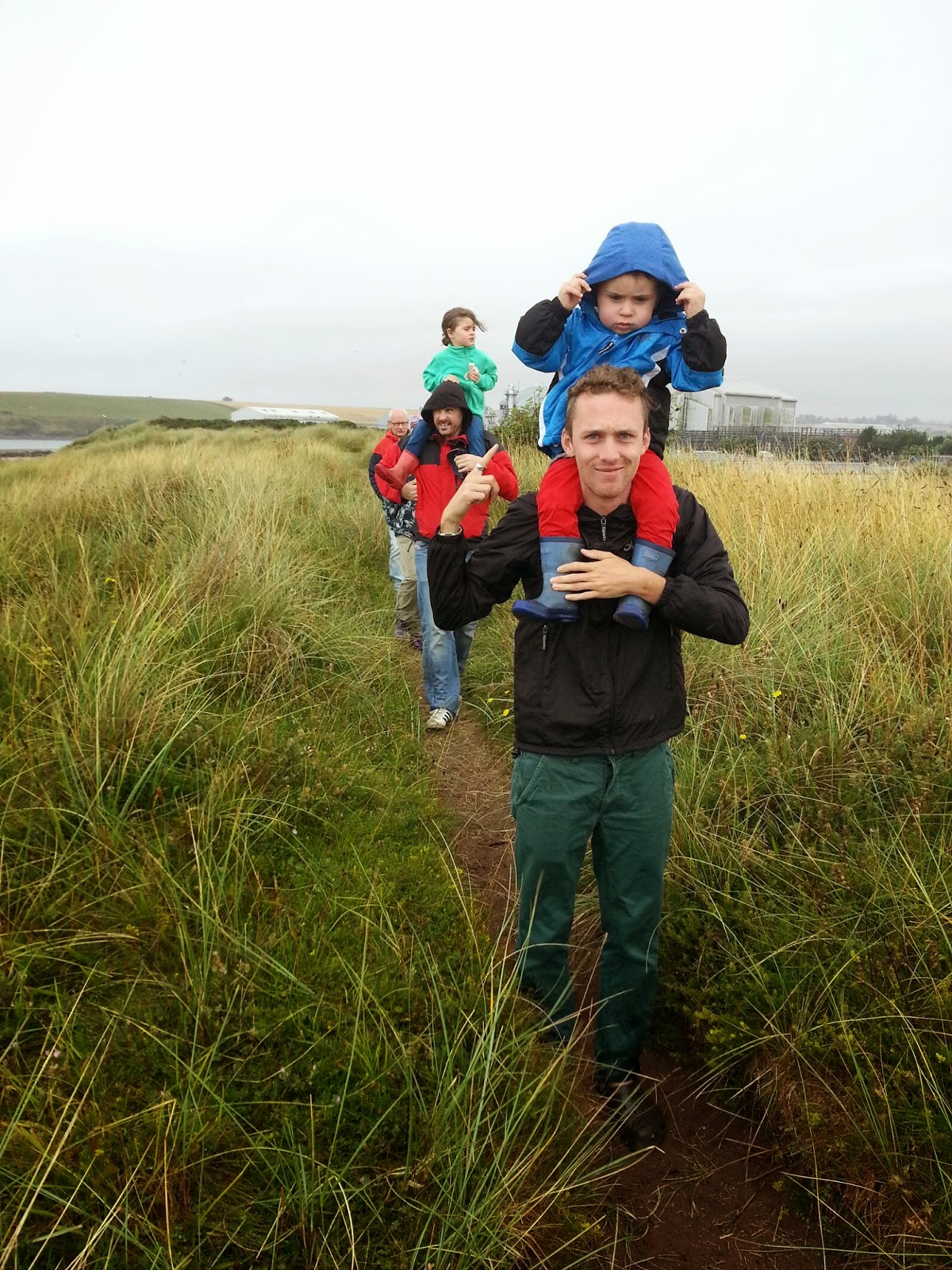 Cycle through Ferryden village to Scurdie Ness. Locked bikes below the lighthouse and walked along to blowhole point. Last visit Roan discovered it, a miniature cave has collapsed and sea pours in and out of the lidless pot - when tide and level of choppiness are right a plume of spray shoots up. This time it was definitely shooting. Mum was at the other side, taking photos of us. She retreated fast when a thick wave rushed around her ankles. 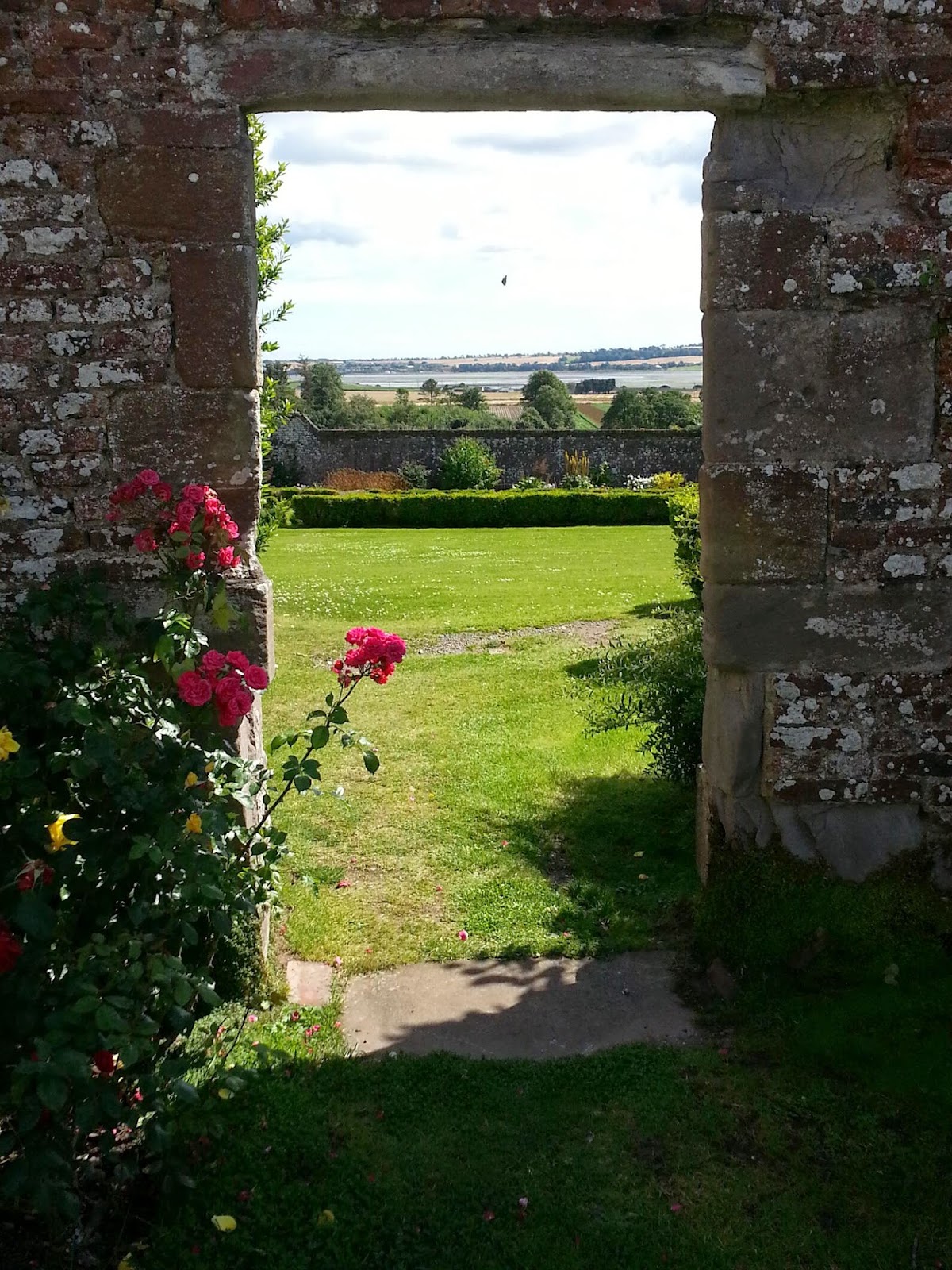 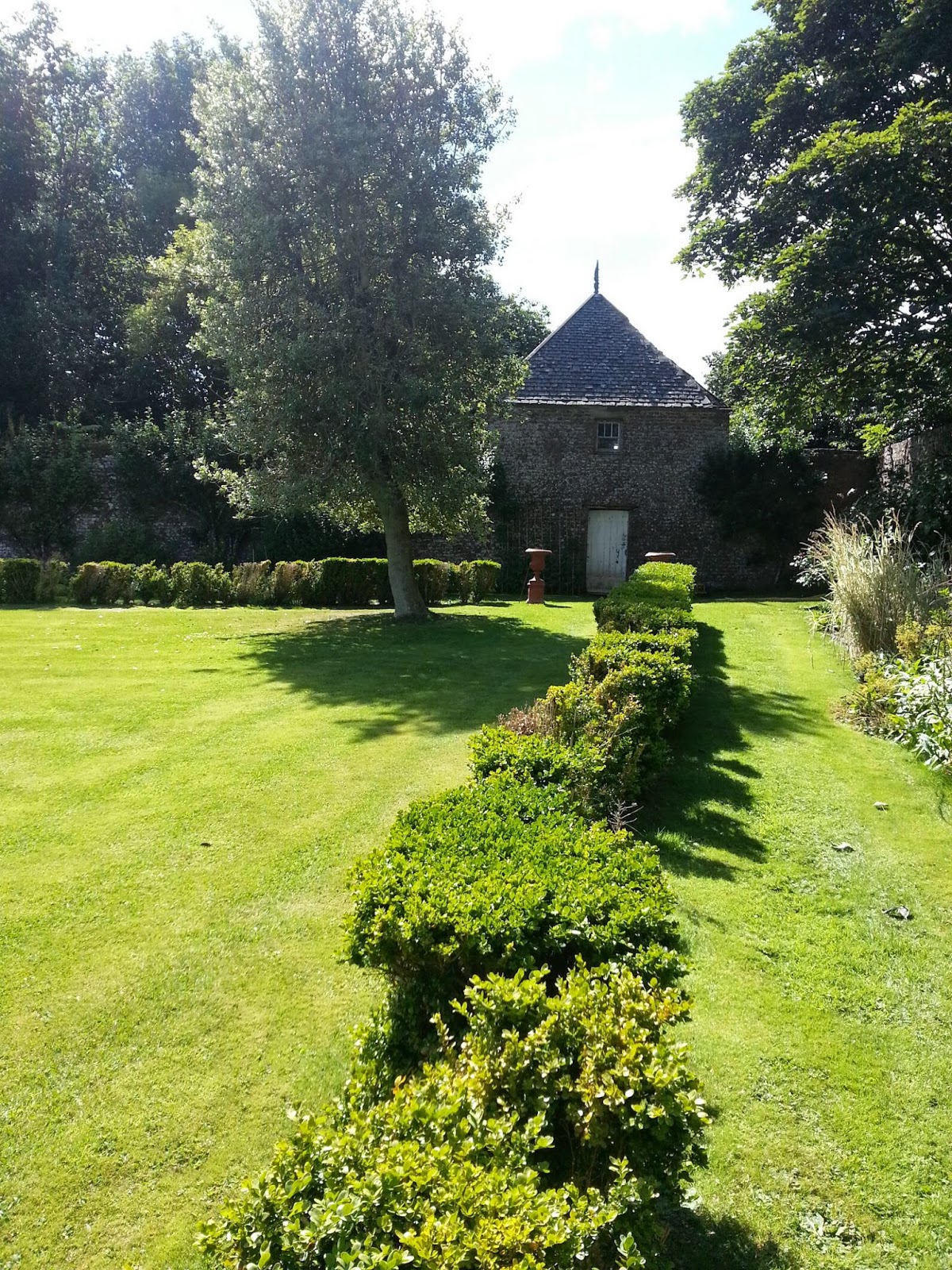 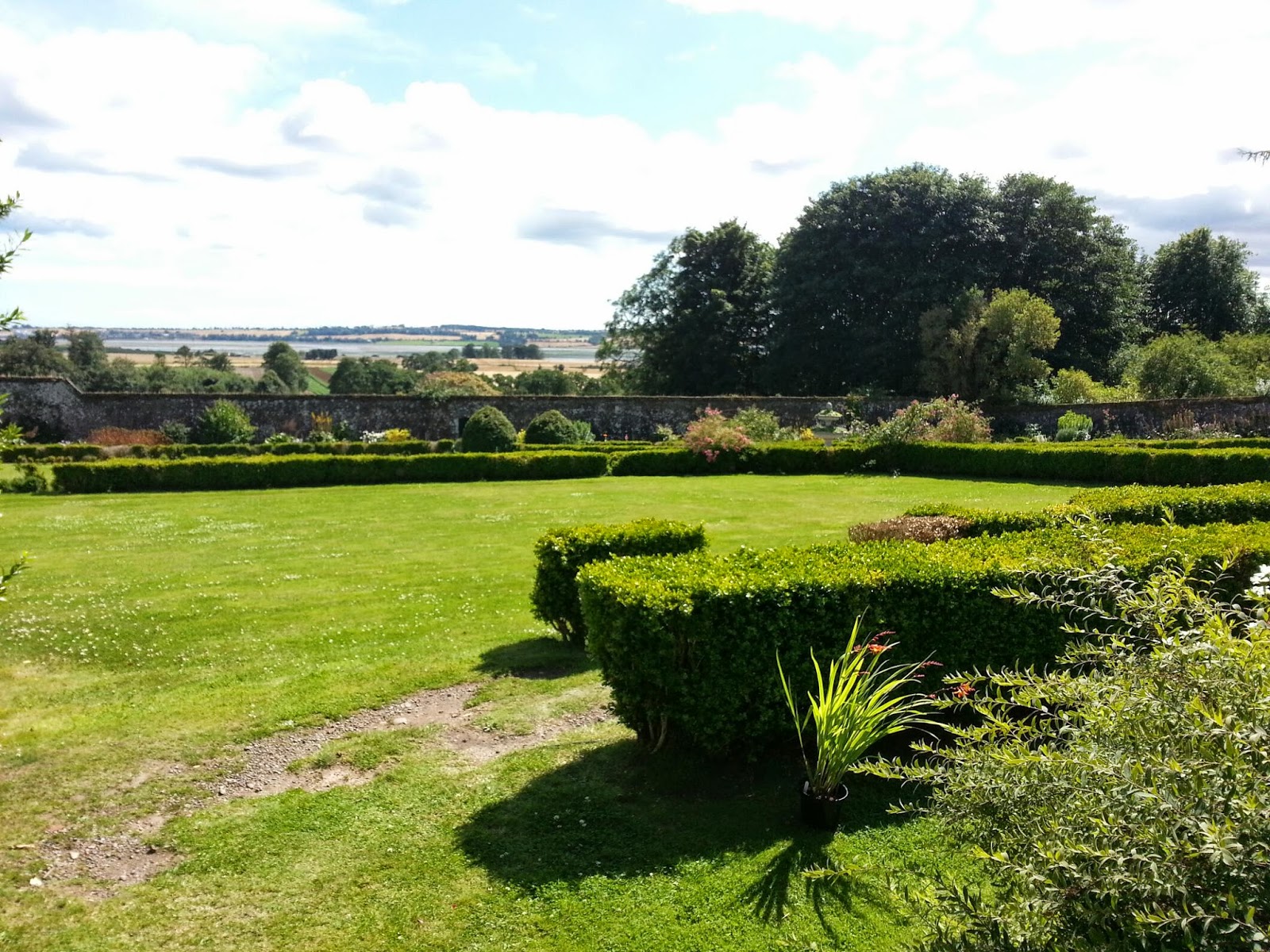 
We returned via the Lurgies at west end of Montrose Basin. A little egret was on the mud and twenty or more grey herons.

A walk on the red cliffs between Arbroath and Auchmithie Harbour. Take a torch for Dark Cave and Light Cave, leading right through the width of a thick headland. 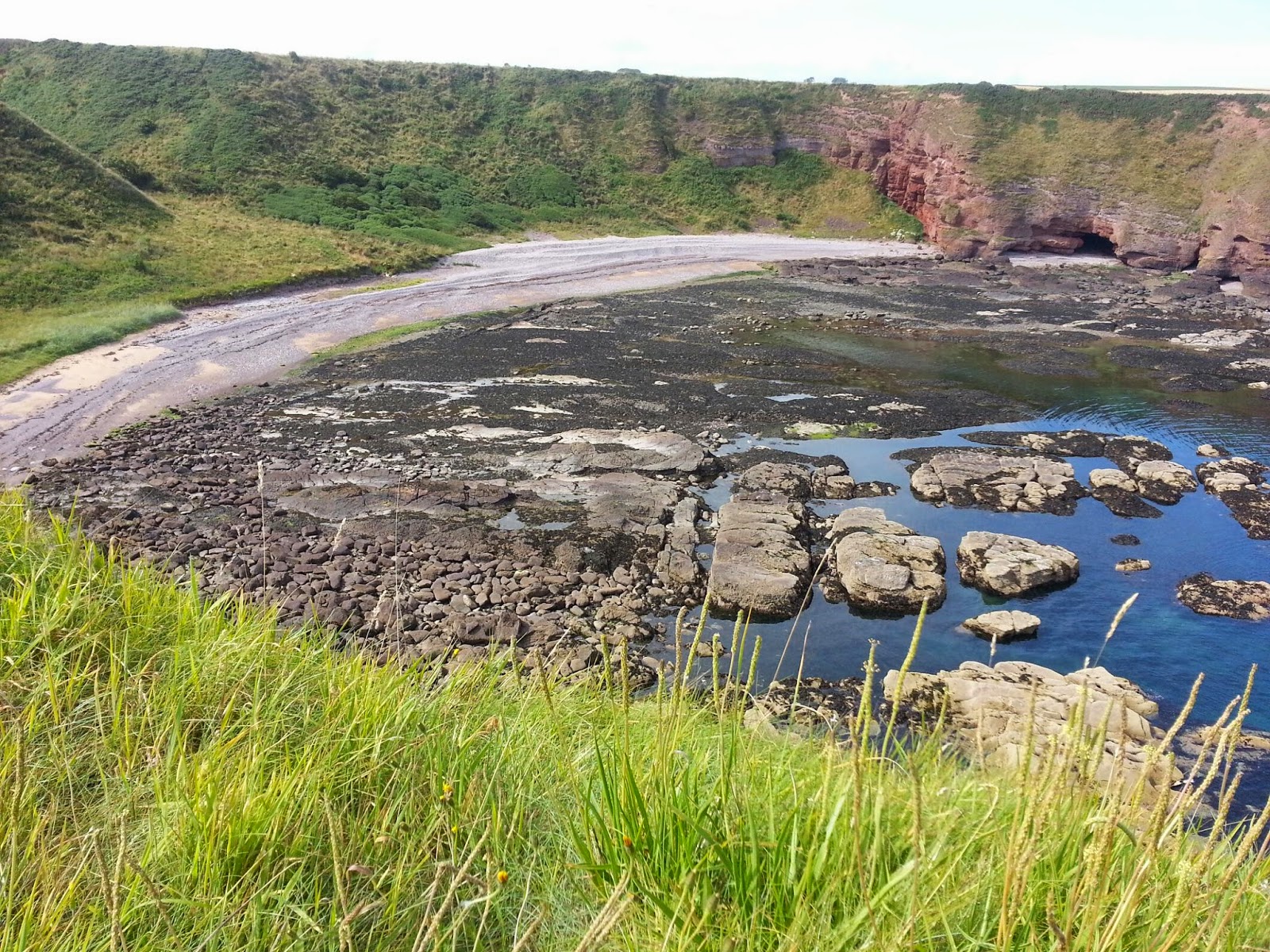 
We stopped and painted - Roan too. Perhaps soon we'll have to think about a Mother & Son & Son exhibition. 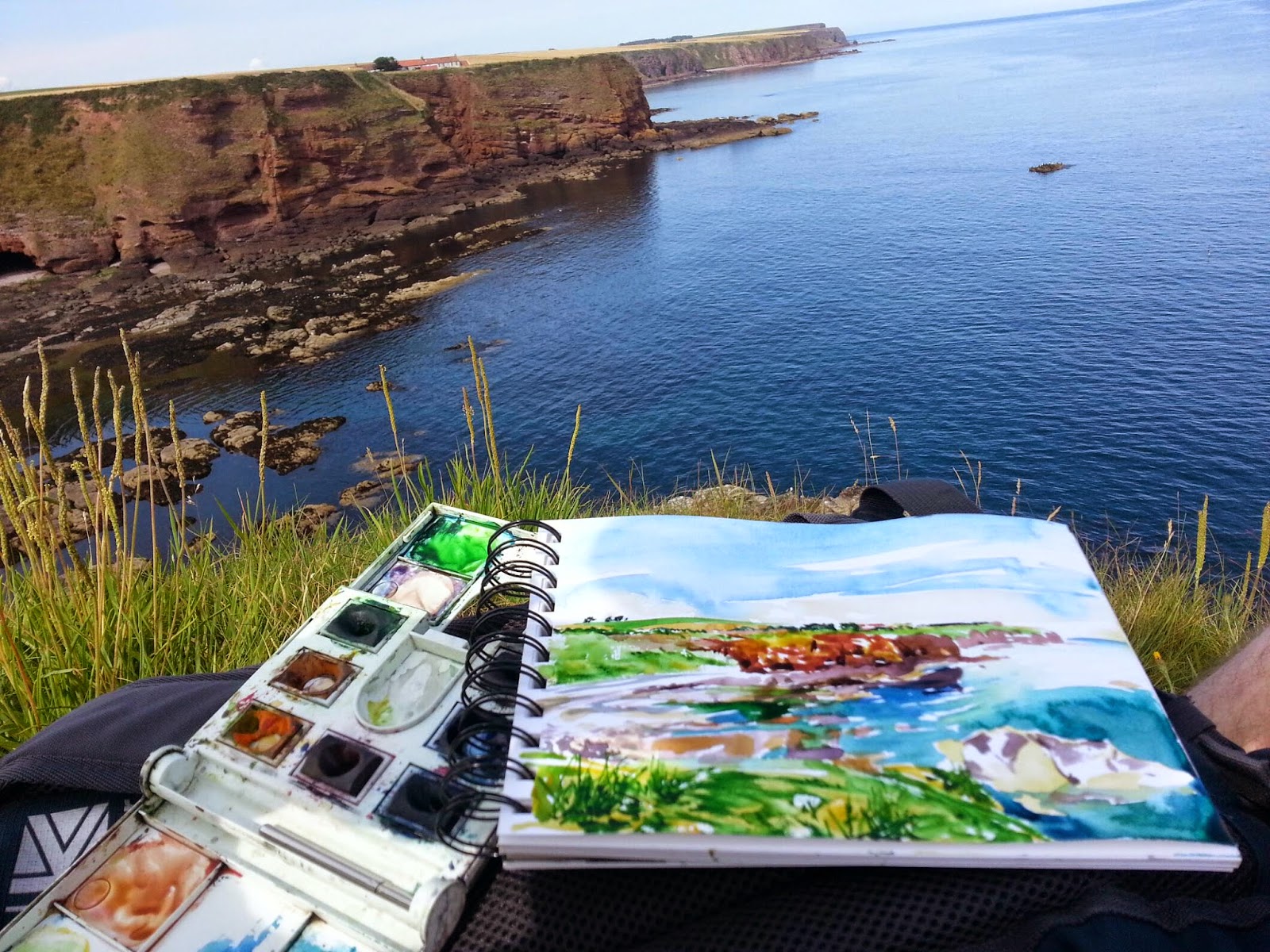 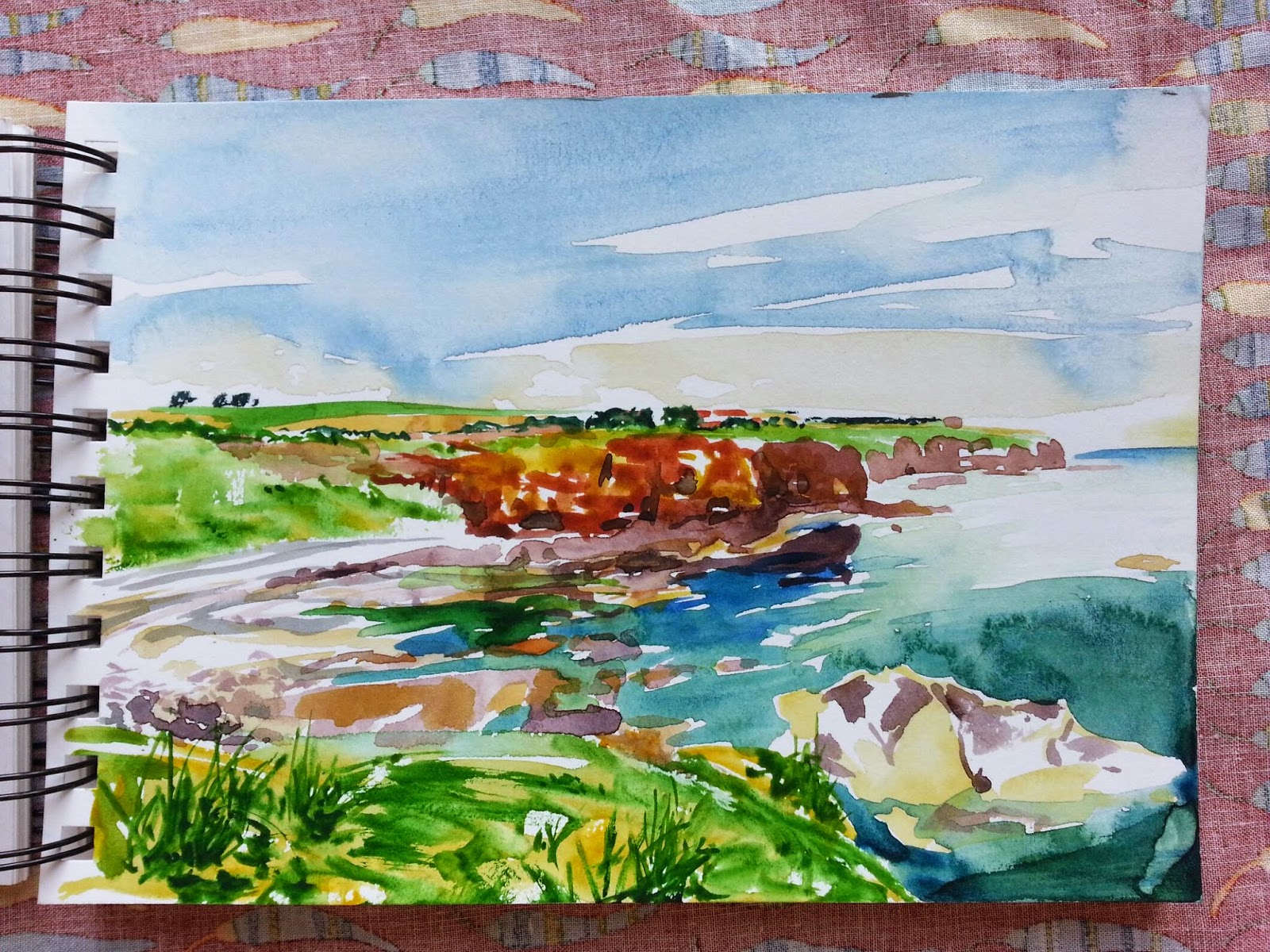 A cycle to the graveyard above double-sea-arched Elephant Rock. Explored the stones in the bay there and painted a view towards the limekilns. 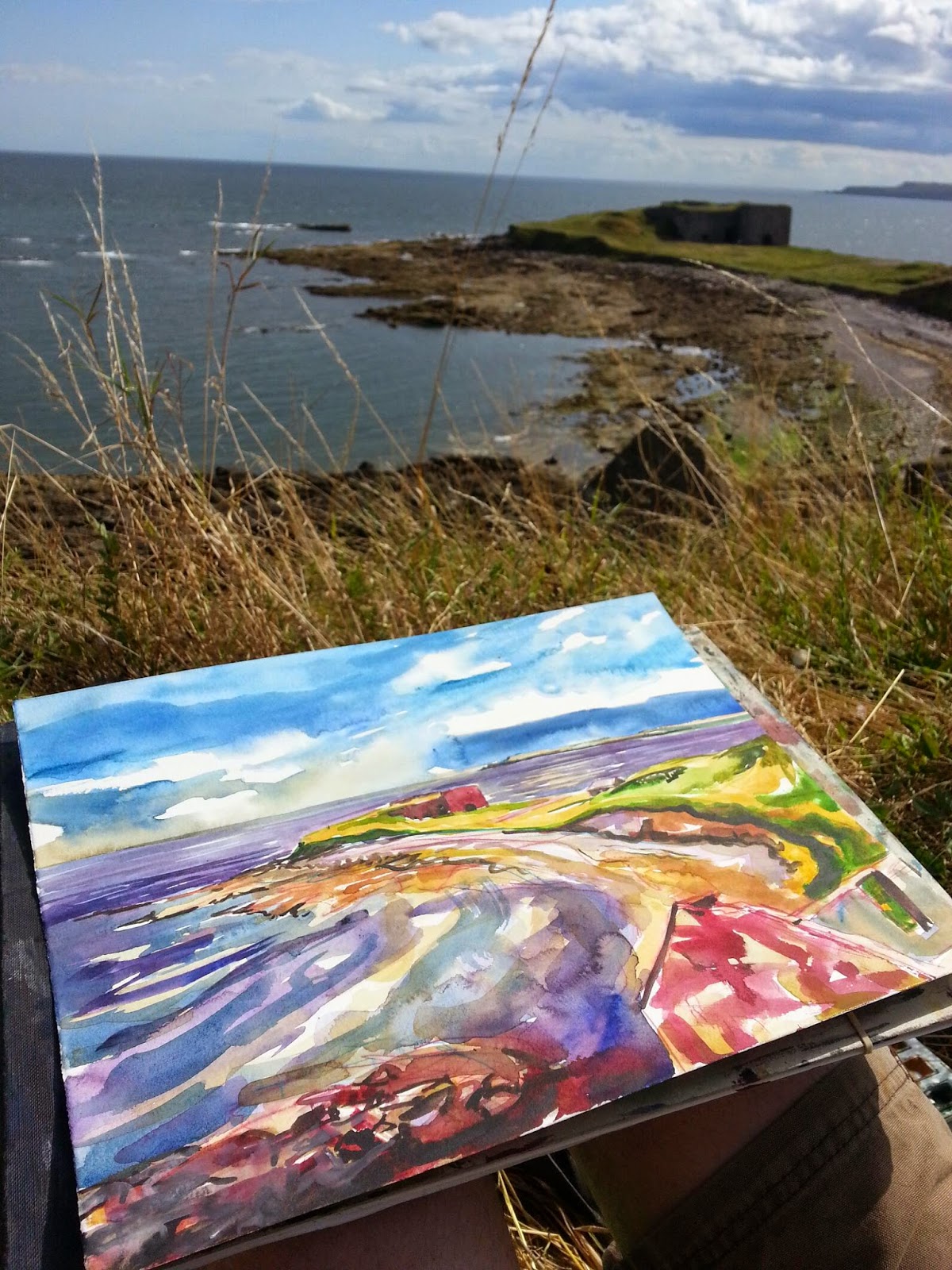 All the seabirds were around, plus a kestrel, house martins, linnets.

Before breakfast I'd stood on the dunes and watched a group of 12 or more dolphins swimming south, up down up down up down, jumping full clear of the water. 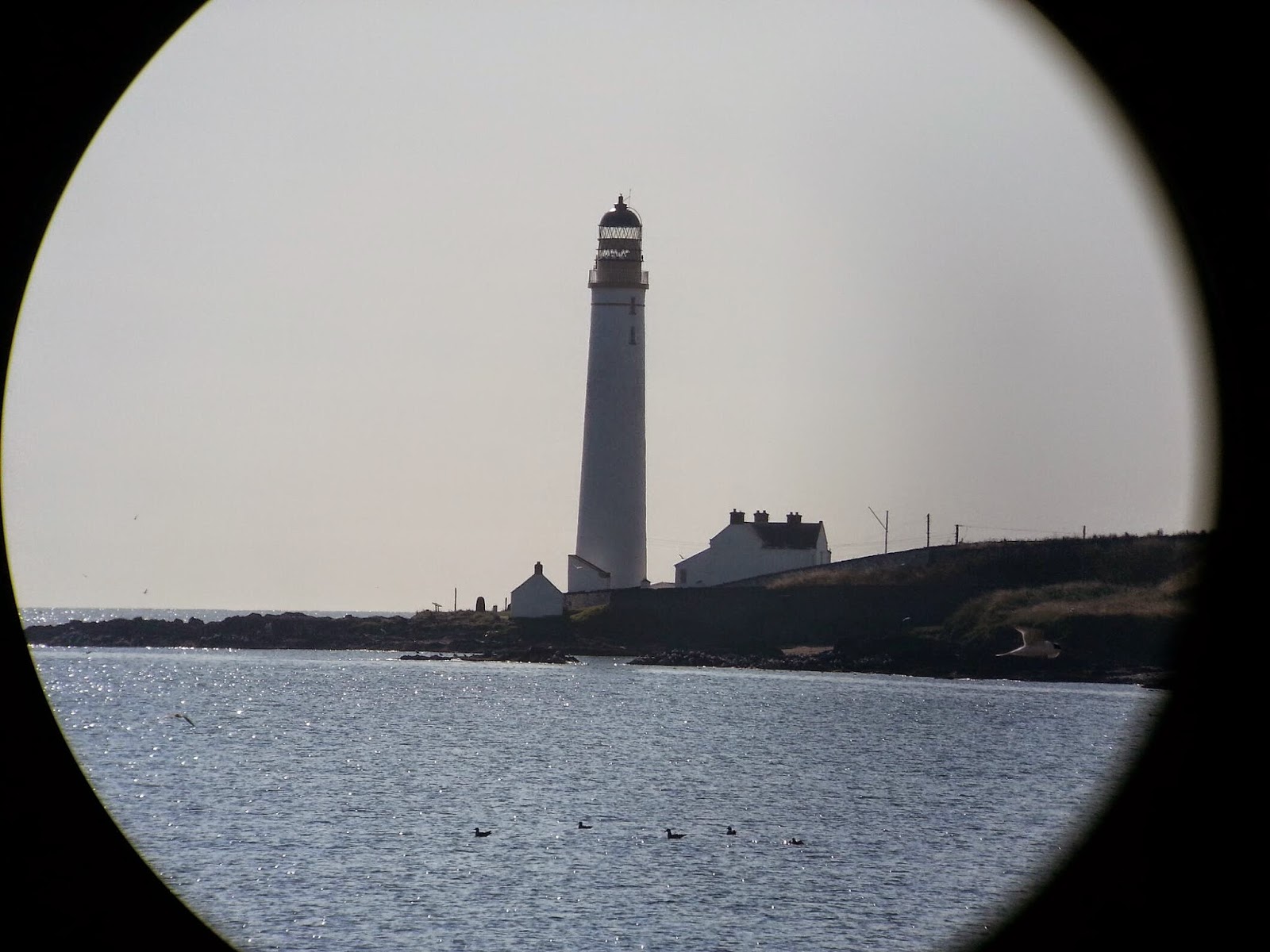 Waiting for my return train at the end of the week I watched an osprey fly high above the Basin. It was constantly mobbed by agitated terns and swallows and martins at the same time as I was constantly divebombed by a territorial pair of lesser black-backed gulls. I stood by a lamppost so they couldn't have any effect other than to give me really good views. Everyone else kept at the other end of the platform.


How to get there


Montrose is easily reached by rail. It's on the Glasgow & Edinburgh - Aberdeen rail lines and trains are frequent.


Posted by Leo du Feu Painter of landscape and nature at 10:55 pm No comments: