Today, Monday 22nd July, our Jersey Granny is one year short of receiving her telegram from the Queen. We call her Jersey Granny because that's where she's from, born and brought up on the Channel Island of Jersery. Granny's husband Alfred (dad's dad) was a Jersey child too, though not from a farming family like Granny. It's from Alfred's family that we get this great surname. You can read about life during the German Occupation in Granny's Jersey Occupation Diary, published by Seaflower Books under her maiden name Nan le Ruez. Order it here or from your local bookshop.


The birthday
A gathering was organised by uncle Chris and auntie Christine and we made the trip to Woodhall Spa, Lincolnshire, where Granny now lives. Dad's lady Anne drove us (me, dad, brother Roan) skillfully through sun (lots of) and storm (short, but what a downpour). We took a circuitous route to mostly avoid the biggest roads and to follow the line of the currently-under-construction Borders Railway.

Once in Woodhall Spa - lovely family time coincided with the town's 1940's weekend, meaning World War Two fire vehicles in the car park, soldiers and land girls in the street, Blitz dancing on the green, tommies camping in the woods, a troupe of yankee jeeps parked up outside the ice cream shop and crowds of happy people everywhere. There were flypasts by a Hurricane, a Dakota, a Spitfire. On Sunday two Spitfires duetting, magnificent in flight. 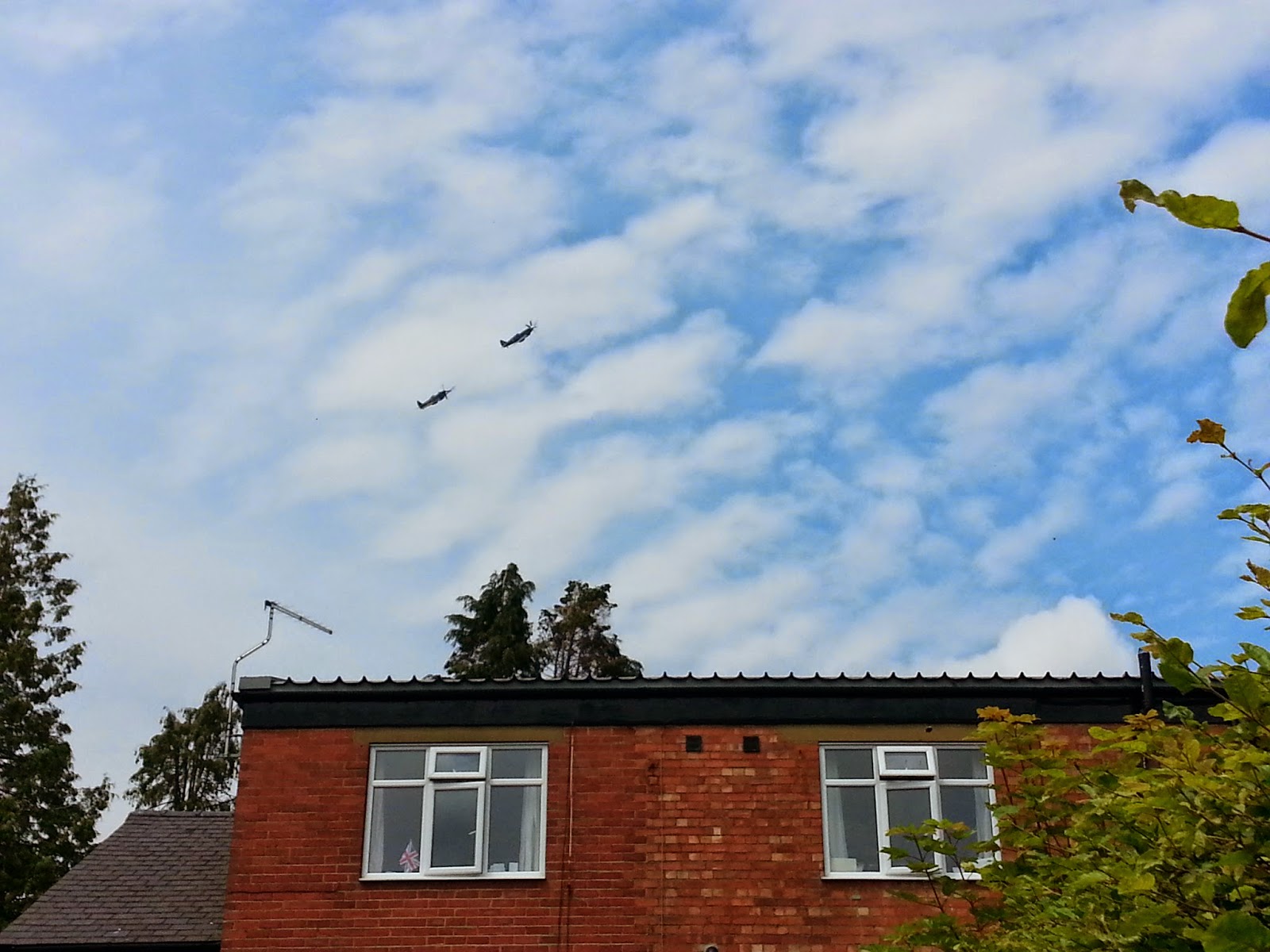 Woodhall Spa nature
We made time for walks: Woodhall Spa woods and golf course - jays, a hare, a green woodpecker, a kestrel, all seen well; Moor Farm nature reserve, as featured in my previous Woodhall Spa blog post here. Such quantity of butterflies in the summer sun, and not just those that we're used to from home - we saw commas, skippers, gatekeepers, a large white. Also peacocks, meadow browns, ringlets, at least one blue. 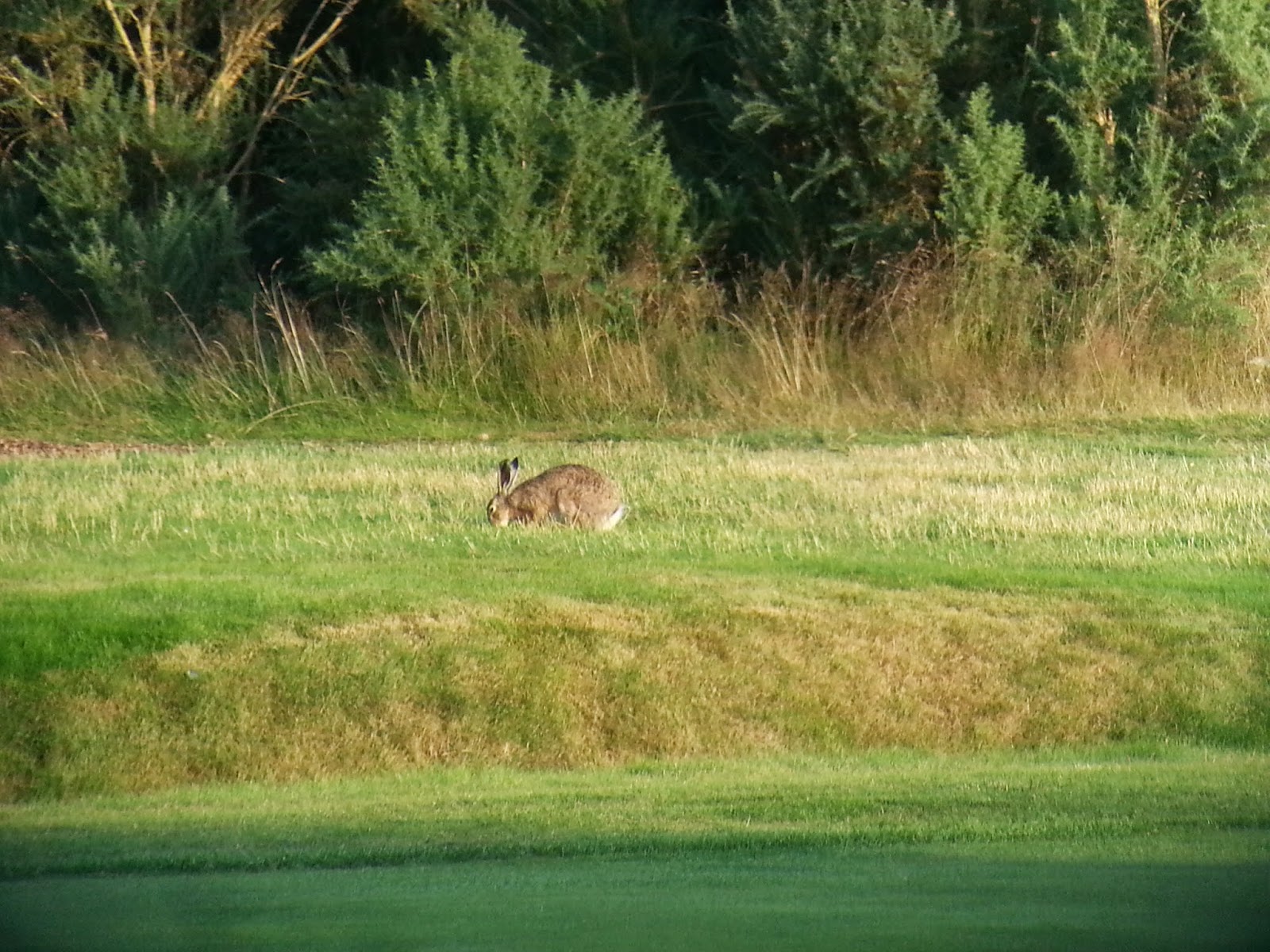 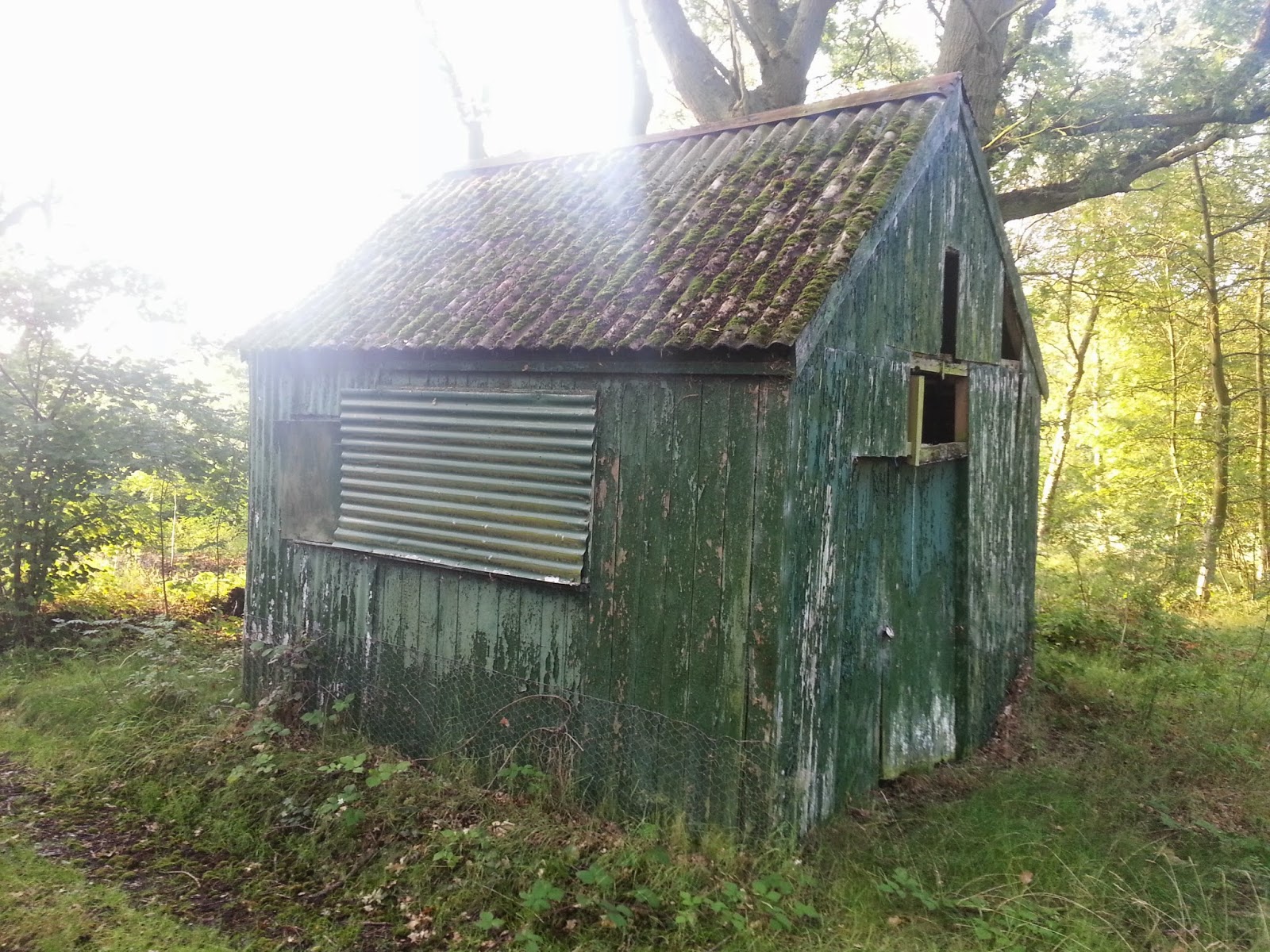 Dunston moths
On Saturday night in nearby Dunston village I stayed up later than I intended because of exciting numbers of moths flutter flocking the lights outside our bed and breakfast. Here are some photos, I've still to go through the books to i.d. them. I love doing that. 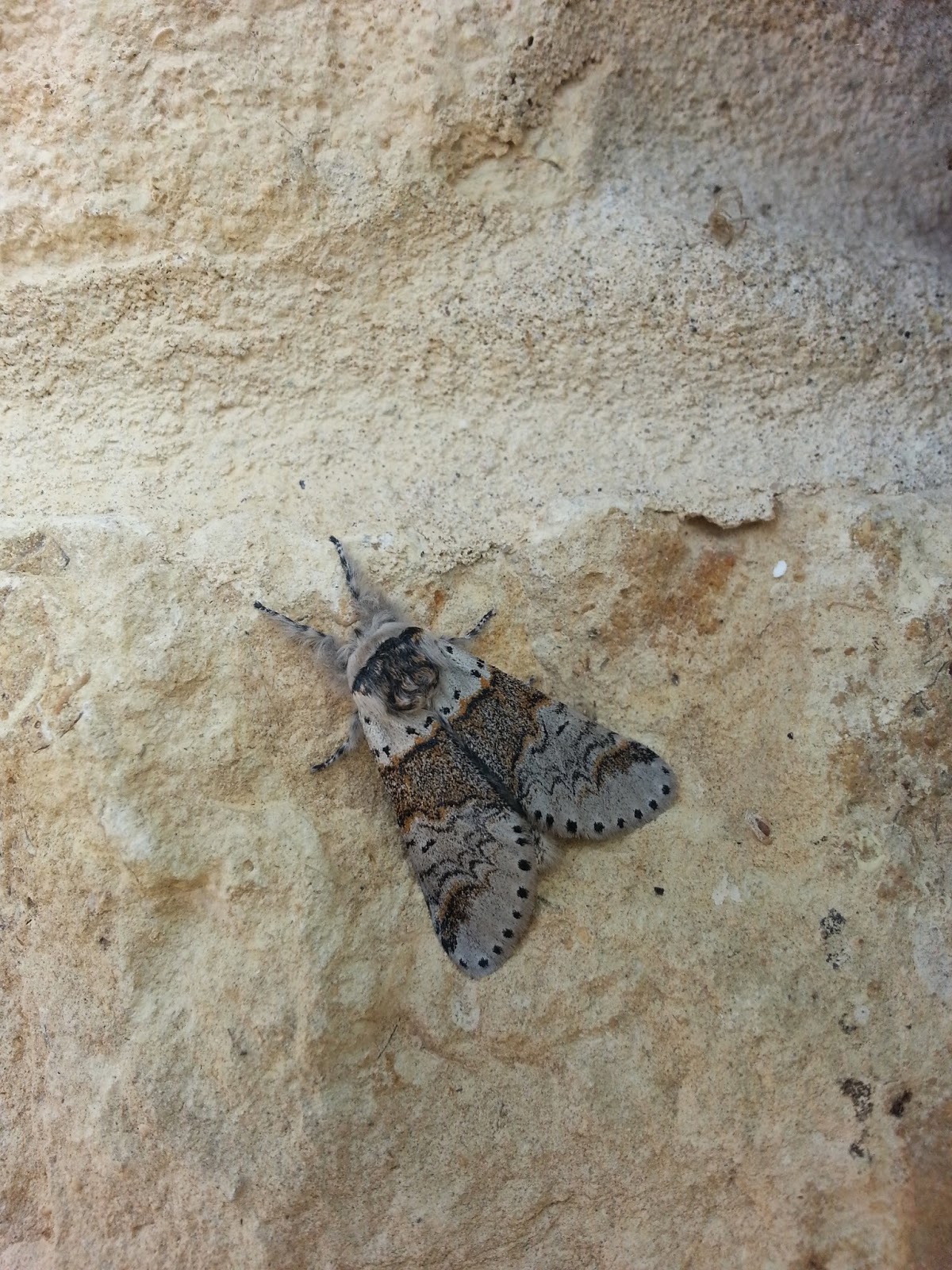 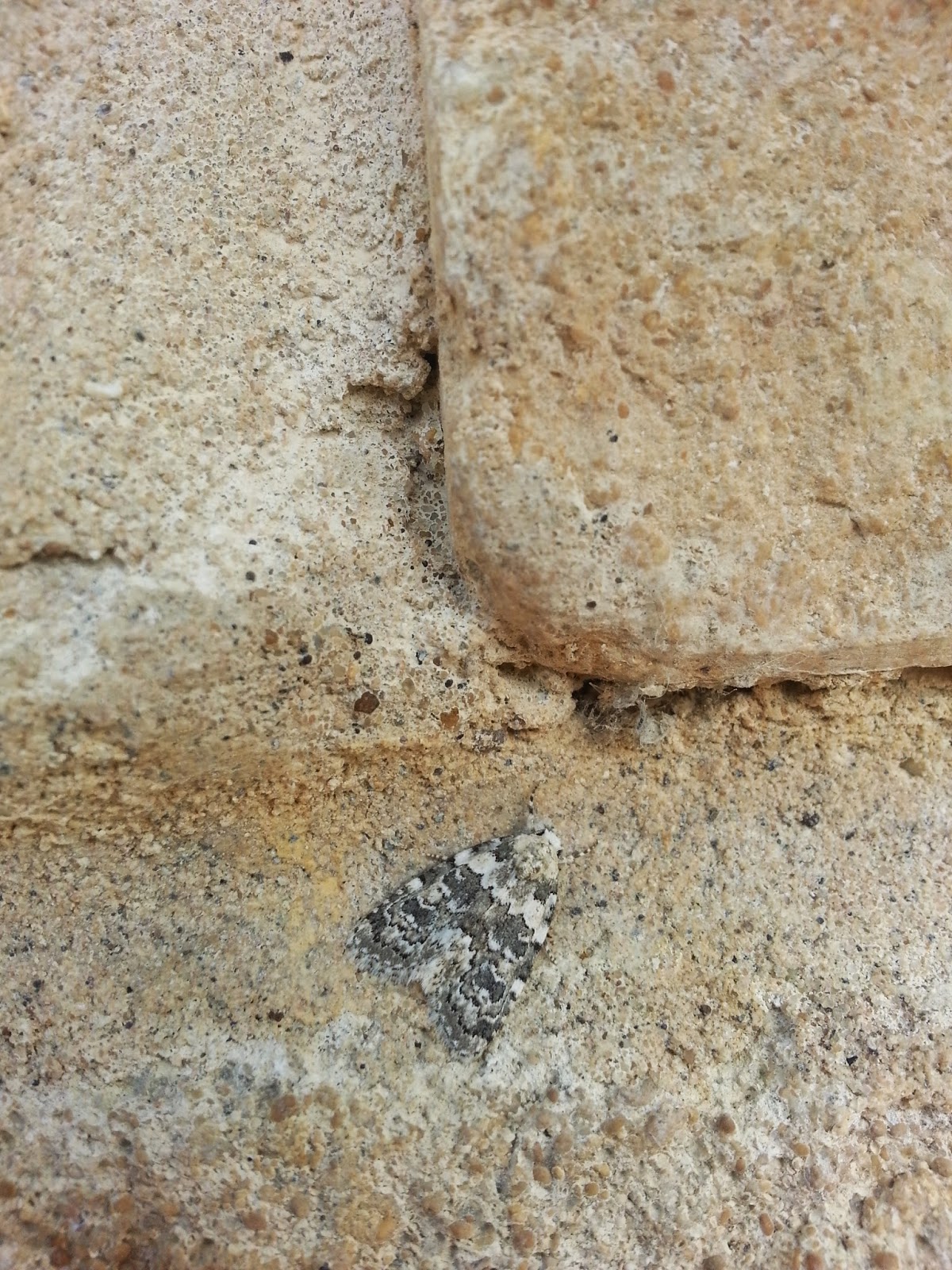 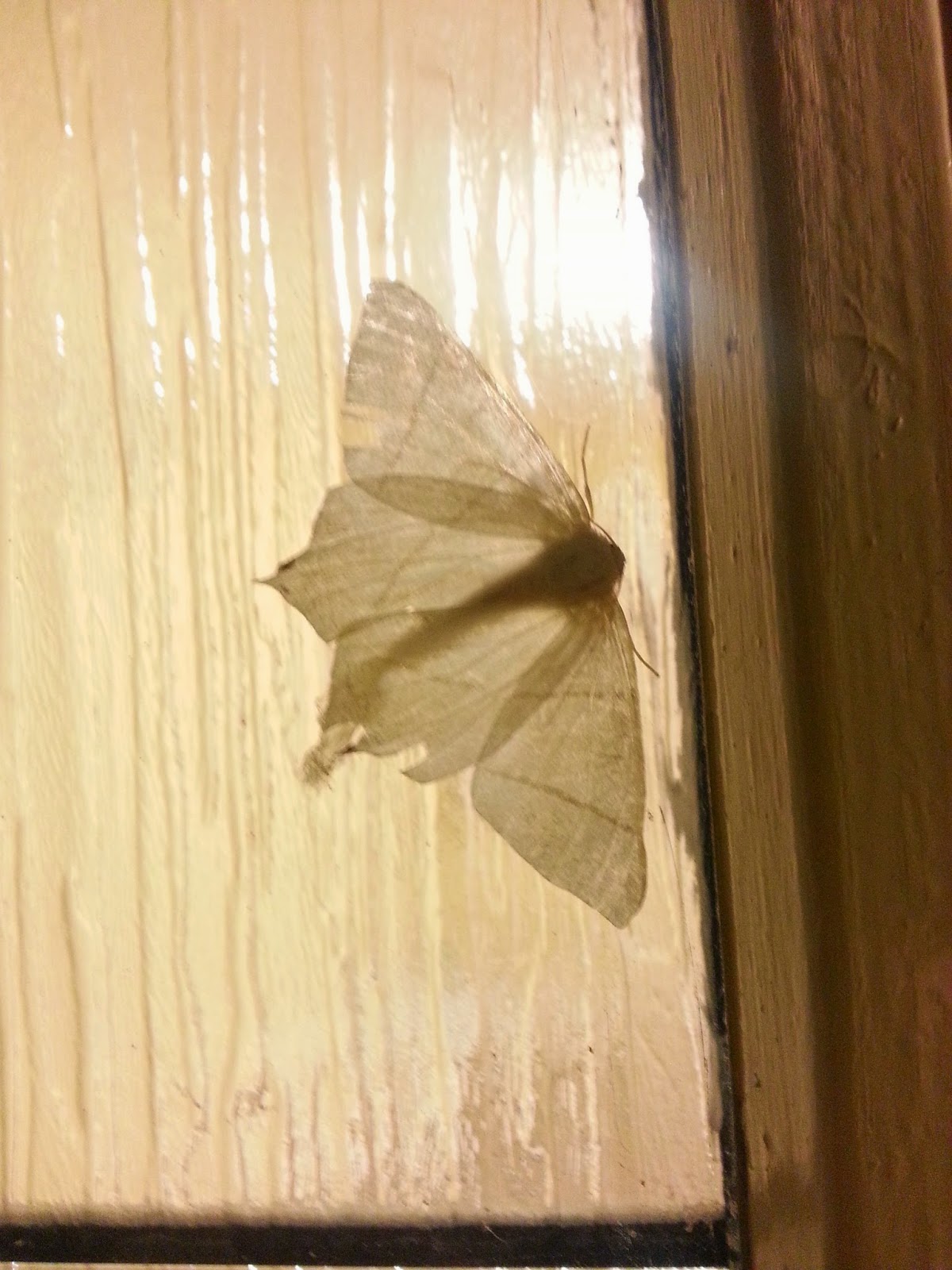 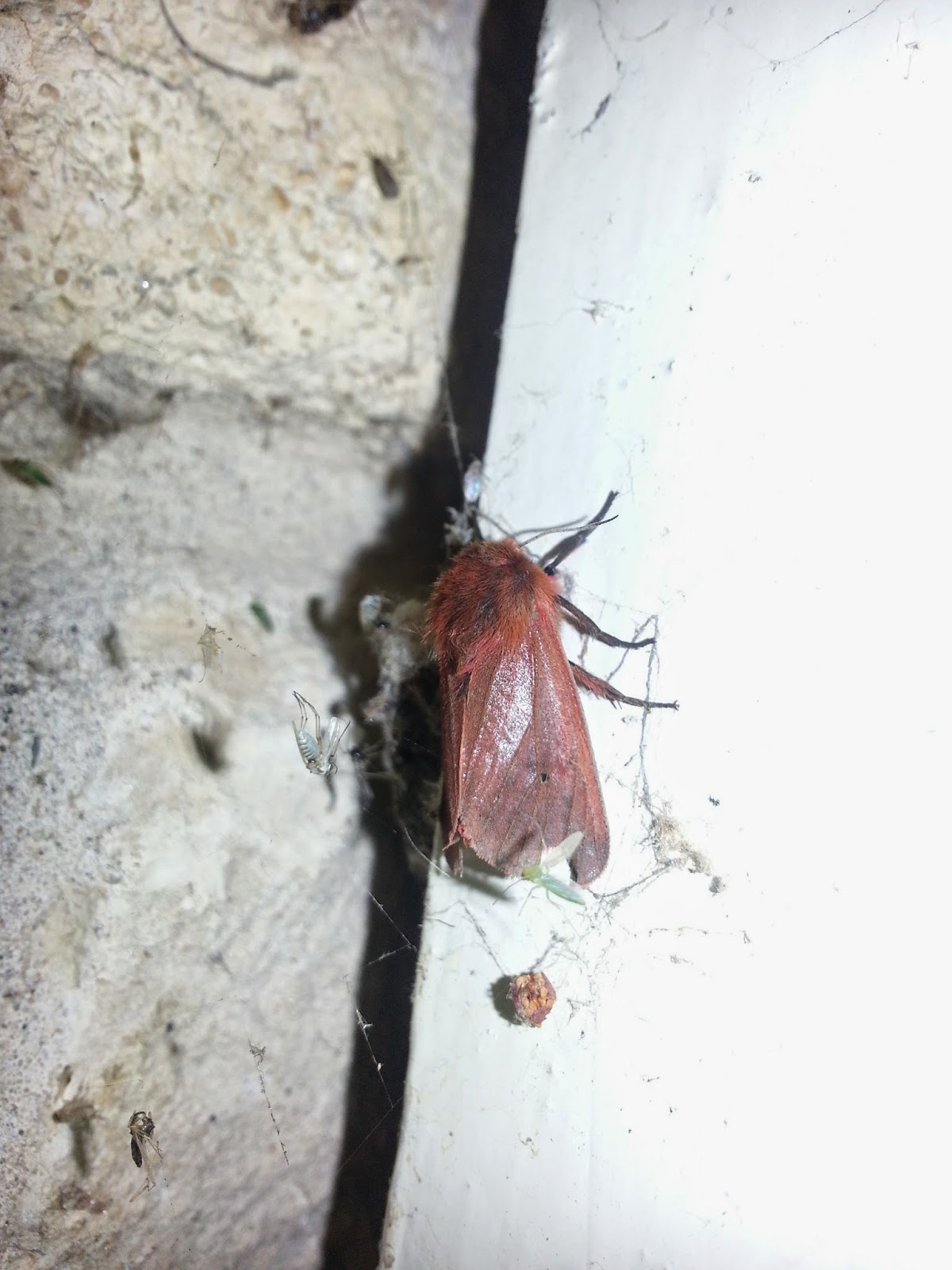 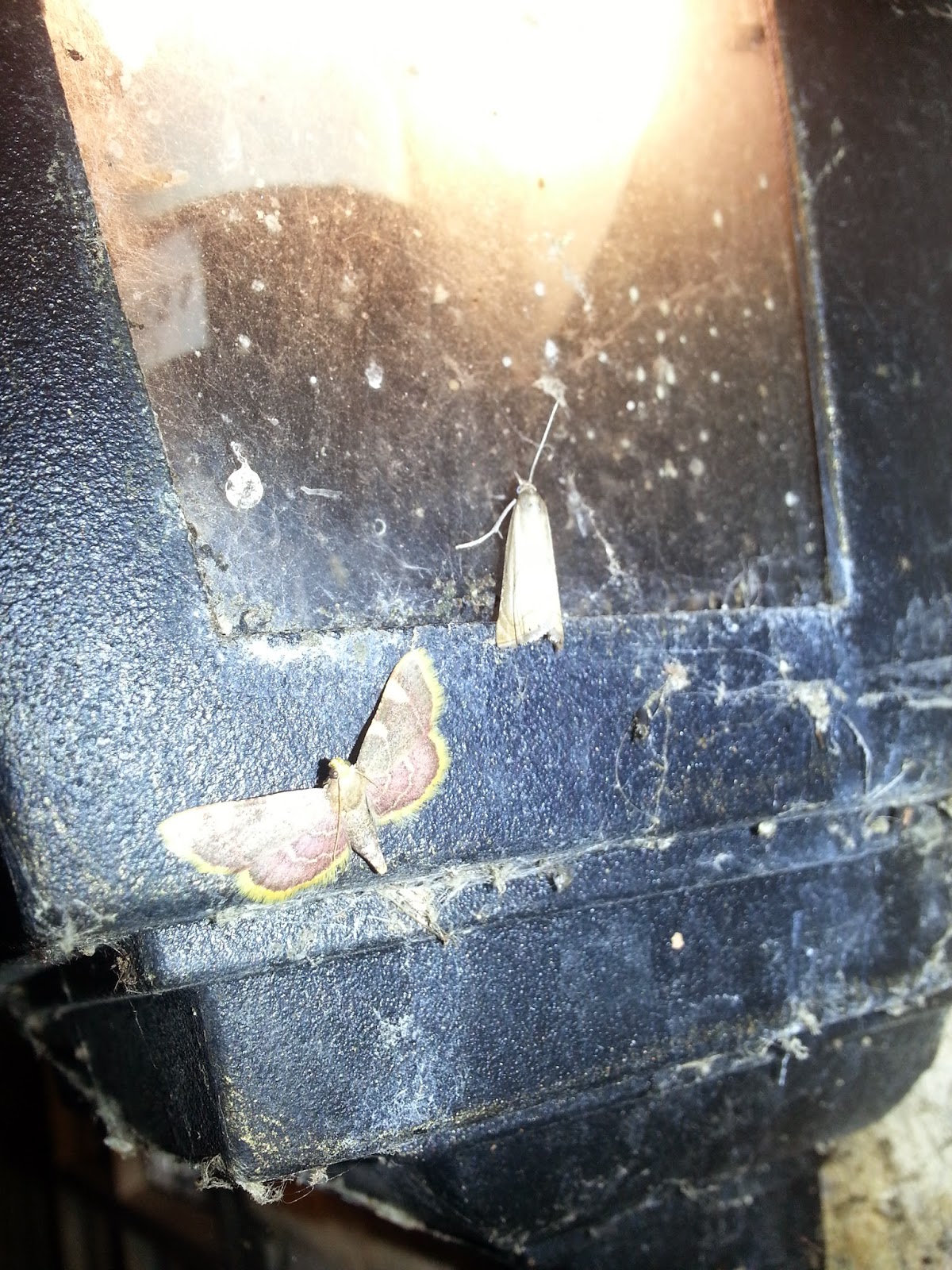 Dunston walk
Early on Sunday I made a pre-breakfast solo exploration of footpath and bridleway, restricted byway and non-restricted byway, through the fields and wooded lanes surrounding the village. Linlcolnshire is so flat, it feels so British - village greens, church steeples, collared doves coo-cooing. Such huge skies.

A hare bunched up on the edge of a corn field, tan fur on red soil below rich sheaths of green. A deer stepped across the path in front of me, two grey partridges and a pheasant did likewise a little further on, separated from me by gating and a strong PRIVATE ROAD sign. I forget how lucky we are with our right to roam in Scotland.


I took a pocket field guide and tried to learn some wild flowers. I learned bristly oxtongue. Ragwort I already knew, golden yellow flowers feeding and housing the golden yellow-black striped caterpillars that will become crimson-black striped-spotted cinnabar moths. Another one I knew grew all along the same track - pineappleweed. Rub flower or leaves between fingers and the lush scent makes its etymology clear. My book tells that pineappleweed wasn't in the UK until introduced from America in 1871. Now it's everywhere.

Posted by Leo du Feu Painter of landscape and nature at 11:25 pm No comments:

Email ThisBlogThis!Share to TwitterShare to FacebookShare to Pinterest
Labels: birds


Back when I was at art college I primarily painted fantastical landscapes. They looked otherworldy but were almost always inspired by real things, by details in nature: a sheep's skull; fissures in bark; moss growing on a wall, lichen on a gravestone. I 'found' these landscapes, so I called them Discovered Worlds.


I've painted very little of this sort of work since I graduated, there's just not enough time to do everything one wants. Scotland has such fantastic landscapes as it is, and I really do like birds. But I also loved discovering these worlds so when a guest saw one and commissioned a small series I was very excited to have the excuse.

Five 30x30cm panels were commissioned, each a detail on a clean white background, some real landscapes, some discovered. I also made a trial 10x10cm piece, plus a little surprise extra featuring a very special dog... 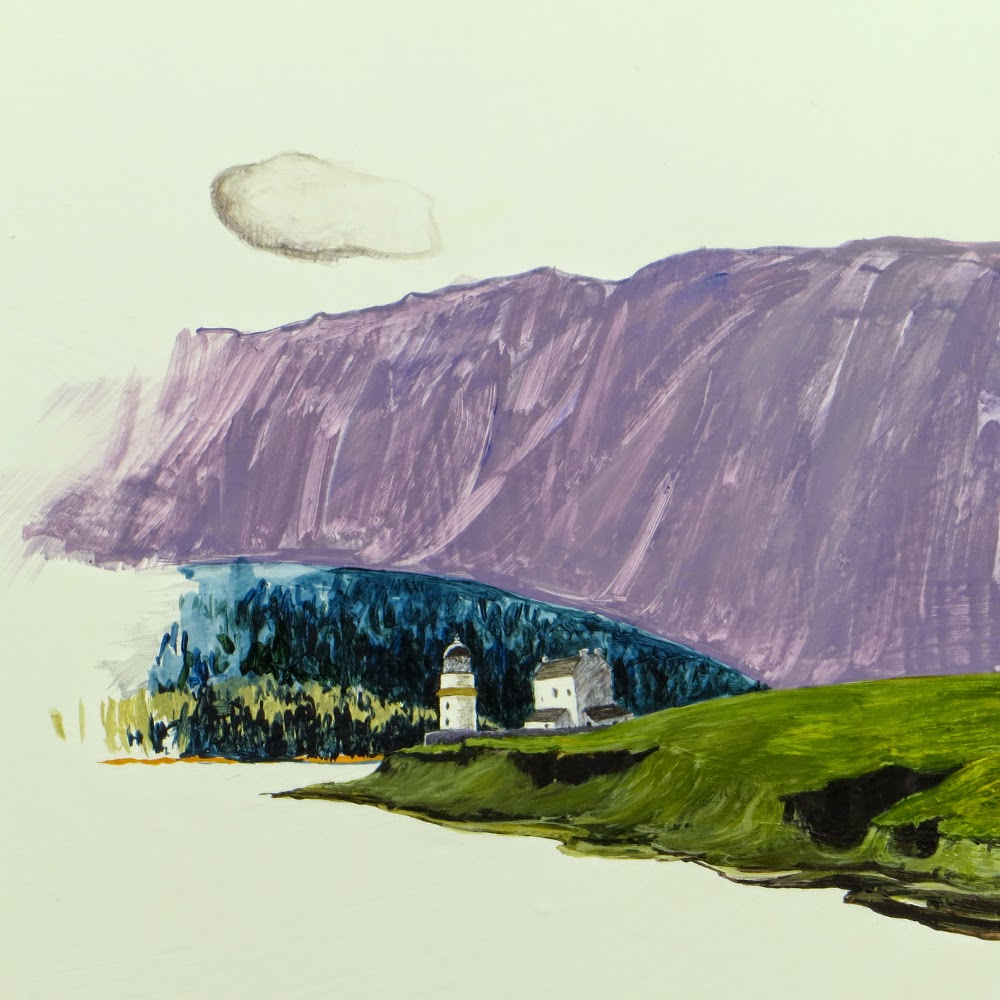 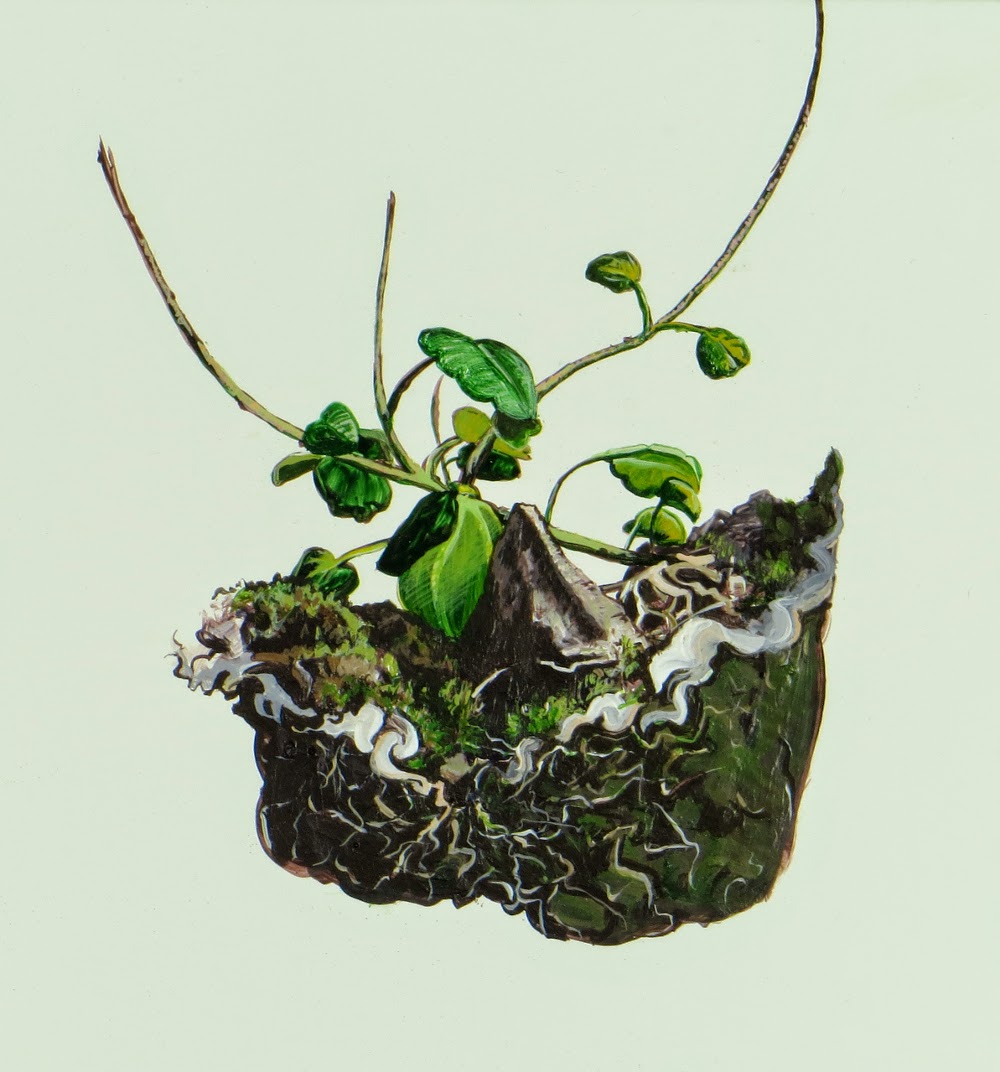 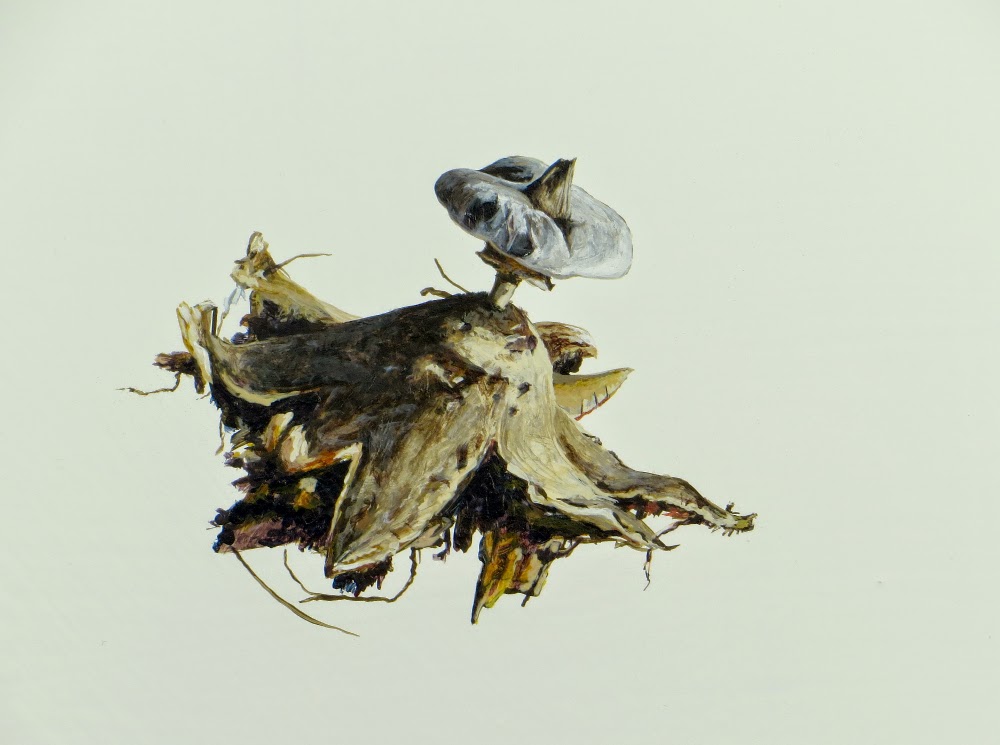 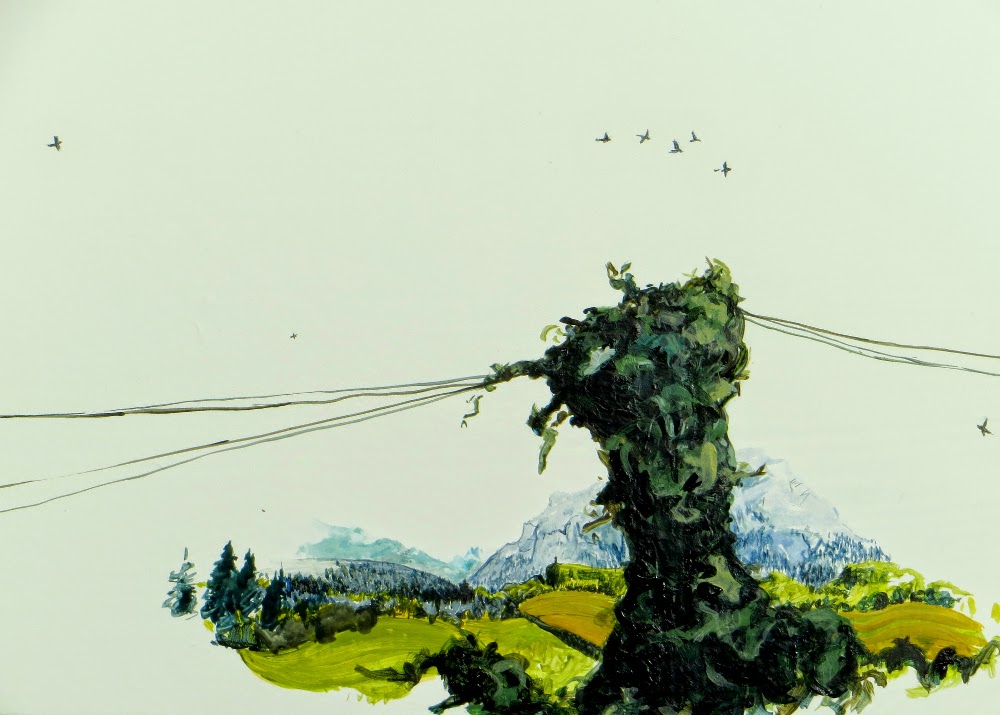 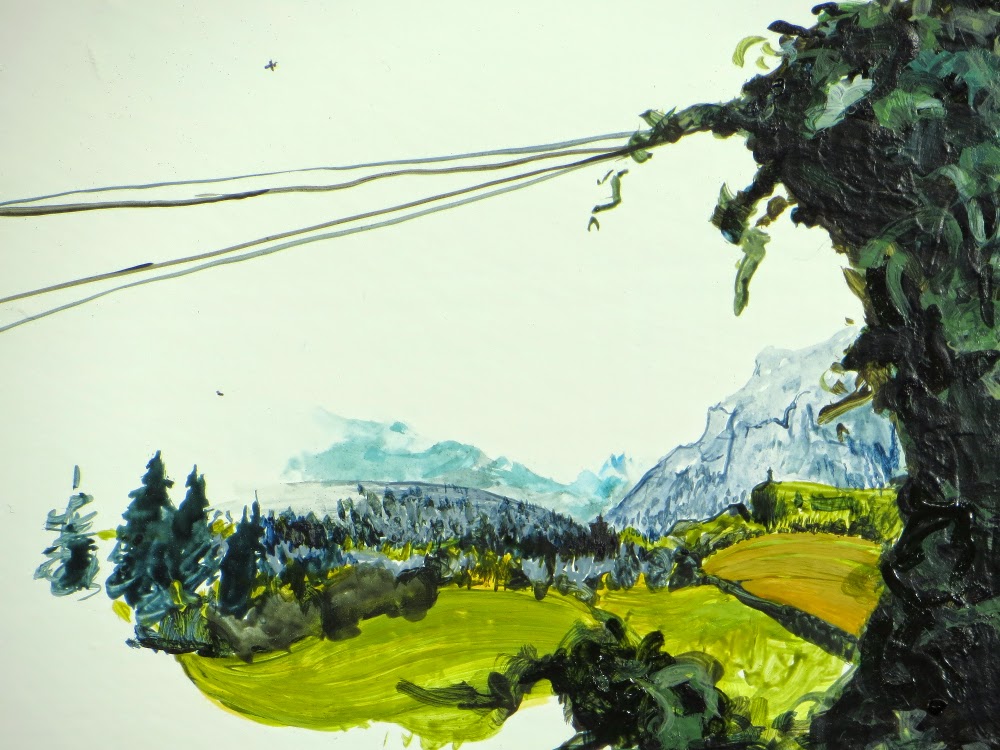 Posted by Leo du Feu Painter of landscape and nature at 7:32 pm 3 comments:

A long-planned, long-awaited sketching weekend in mum's caravan in Montrose, me and mum, travelling by train. From Burntisland change at Kirkcaldy, change at Dundee, arrive in Montrose only a little over two hours later.

We had two full days and two half days. Each day going somewhere different, each location would be easily do-able as a daytrip by rail and foot or by rail and bike.

As is our norm we arrived, turned on the caravan, offloaded our baggage then immediately up onto the dunes to see what was new. This time of year the dunes are covered in wildflowers and grasses and home to moths, beetles, bumblebees, butterflies and hundreds of little light sandy grasshoppers that flicked from our feet as we brushed past.


A large flock of common terns were on nests on a factory roof, reassuring as a previous gravel nest spot is no longer available. We watched their angry mass mobbing as herring and lesser black-backed gulls tried to take snatch a quick raw-egg-supper. Beside the memorial grave of Second World War naval-dog Bamse we peered with binoculars through the factory security fence and found one lone ringed plover nesting among pebbles, easier to distinguish pebble than plover.

As many eiders as always, a lot female, some still caring for communal creches of ducklings. The spick and span white-black-green feathering of any males was looking scrappy, beginning to moult post-breeding. A few curlews stalking the muddy wet sand and plenty of oystercatchers scampering long-legged along the water's edge. Every so often a sandwich tern creaked overhead.

I stayed out for a couple of pages of quick observational sketches - eiders, terns, goosanders, oystercatchers. Then tea, chat and bed - each with our window ajar, wanting to hear the sounds of outside.

The Scottish Wildlife Trust's Montrose Basin Reserve visitor centre is a couple of miles from the caravan park, less from the station. From station it's pavement and cycle path the whole way. The visitor centre is excellent with panoramic windows, lots of telescopes and binoculars to use and enthusiastic and knowledgeable staff and volunteers to discuss and point things out. There are teas and coffees, from a machine but good, a nice little shop and interesting display boards. In fine weather you can picnic outside and if you get fed-up of the indoor viewing area (which you won't) you can walk a short distance to a hide. Entry is £4 for an adult, £7.50 for a family, or you could become a Scottish Wildlife Trust member and entry will always be free. Totally worth it.

We saw a threesome of stoats bounding and tumbling together along an overgrown fence-line. A crow grabbed a gorgeously fluffy eider duckling and over many minutes slowly pecked the life out of it, not equipped with sharp enough tools to make a clean job. Two metres beyond the visitor centre windows are feeders filled with seed and peanuts. Finches -gold, green and chaf- flock to them alongside tree and house sparrows and most of the tits. Sometimes a great spotted woodpecker flies in, though we didn't see any. Below are robins, blackbirds and dunnocks pecking up anything spilled. A family of mother, father, chickling pheasants were doing the same, safe here from anyone out to fill them with shot. Not totally safe though - when a mallard pair came along the pheasants became alert, a mallard might grab a small chick.


When we were down in the hide, windows open, soup from our flask, working, I glimpsed a water rail! Darting across a clearing between two reed banks. The exclamation mark is how I felt. Similar to a moorhen only more leggy and with an ox-blood red beak half the length and curve of a curlew's, you hear them squealing and grunting pig-like among the reeds but they're extremely shy and you seldom see one. After a pause of many minutes there it was again, this time moving stealthily, crossing the clearing in the opposite direction. Then, following shortly after... three black fuzzballs on legs (again an exclamation!), then a second adult bringing up the rear.

An along-the-coast walk from Scurdie Ness lighthouse to cliffs below Usan hamlet, cycling the initial two caravan to lighthouse miles in order to give more sketch time. As we were locking up our bikes three, four, six, ten, more, bottlenose dolphins were in the estuary mouth, swimming, rolling, sometimes jumping. As close as you're likely to get without being in a boat. We watched for a long time. They were still going when we dragged ourselves away to get started.

We seem never to get very far: birds, insects, mammals; flowers and grasses; that lovely red pebble; the possibility of geodes along the shore. All waylay us.

A ringed plover hobbled away, dragging its wings and opening its tail - faking an injury to attract us towards it, away from its eggs/chicks. We moved away from the pebbles, fearing we might step on a nest space.


We spend several hours working from rocks, looking across of bay of eiders to the ruined farm building at Mains of Usan. A few of the cows in our field ventured closer and closer throughout, inquisitive, wearing sleek black coats.

A surprise - a hare on the shingle:

Our turnaround and lunch spot was below the fishing hamlet of Usan. We ate first, then painted and sketched.


Back at the caravan

On the final morning my eye was caught by a melanistic house sparrow. Melanism, leucism, albinism all cause fascinating variations from standard plumage.

The BTO is running a long-term study of abnormally coloured birds.
See a selection of the photos here, really quite amazing.
Email your sightings to gbw@bto.org

Montrose is easy to get to on the Glasgow & Edinburgh - Aberdeen rail lines, trains are frequent.

Posted by Leo du Feu Painter of landscape and nature at 9:02 am No comments: