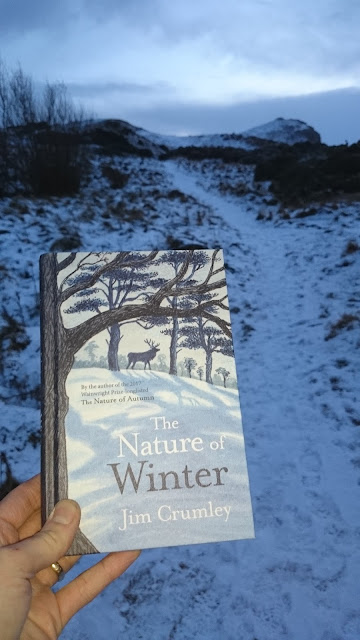 After Jim Crumley's talk at the 2017 Edinburgh International Book Festival last August I sat on the train home with my new copy of his book The Nature of Winter. I was trying to begin at the beginning. When Jim gave me the book a few hours earlier I'd persuaded myself not to flick through in search of mention of a Firth of Forth whale watching day we shared in Fife back at the start of the year. More exciting to just come upon it as I read, if it was there at all. I restrained my curiosity through the first page, a painter's eye rendering of a portrait of forty-five little egrets, beautifully described. Got a quarter of the way through the second page, came to the phrase, "an artist's canvas". Artist's. Decided a quick check of the Contents page was acceptable. Chapter Six - Whale Watch (1): The Narwhal in the Sky. Chapter Ten - Whale Watch (2): The Humpback's Back. That second was what I wanted, the whale in the Forth was a humpback.

But do things in order, six comes before ten. I flicked to page 76, scanned the chapter. Not a du nor a Feu in sight. Chapter ten, starting page 145. The humpback was there. The Forth was there. By the time we reached home I'd finished the chapter and on the second last page - du and Feu side by side in that order and preceded by a Leo. A lot of excitement for one half hour.

Two months passed, a baby appeared, a few more months passed. A January day of snow came and I picked Jim's book up again, began reading it on my train journeys and sometimes out loud at home to Oren. Jim is one of his favourite authors. As long as I stick my tongue out a lot whilst reading.

In The Nature of Winter Jim talks about the fact that the nature of winter is changing. It is changing, it has changed, it will keep changing. There's not really very much winter about it any more. How is this shift to unreliable winters (unreliable weather year round! - climate chaos.) going to affect wildlife? How is it already affecting wildlife? Jim has been watching nature for a lot of years, he knows his local territory - and much of Scotland - as well as anyone, more than almost everyone. In this newest book he charts and discusses the changes this intimate knowledge enables him to notice.

Jim's books are intelligent, thoughtful, great reads. They teach you, they make you wonder. They make you feel you're out there, sitting silently beside Jim as you watch that ghostly male hen harrier over the RSPB Insh Marshes, as you storm-shelter with young swallows and martins behind a silver birch in ancient hazel woods on Mull's west coast, as you settle in a February corrie watching that pair of ravens play with a snowbow. And they are witty, funny. I laughed out loud at Jim's silent dismay as he finds himself in a bar, heading towards yet another "a buzzard or an eagle?" conversation with a pint-gulping stranger.

Yesterday morning - snowdrops and lion-headed aconites massed in woods and gardens, daffodils preparing to be next out, chaffinches and tits and thrushes in full spring song - I came to the end of The Nature of Winter and there on the last page were another du and another Feu, side by side, in that order. Preceded by a Leo. Back on that August train it hadn't crossed my mind to flick further, all the way to Acknowledgements. Thanks Jim!

The Nature of Winter and Jim's other inspiring reads:

Posted by Leo du Feu Painter of landscape and nature at 1:17 pm No comments: