How to make a pop-up owl puppet

A workshop at the Scottish Owl Centre, for Eczema Outreach Scotland.


Two I made earlier:

1 - receive excellent tour of Scottish Owl Centre; see lots of beautiful owls and learn lots about them on a 'journey to the north pole'.

2 - scrumple sheet of newspaper into a ball and tape securely to the end of a long stick: 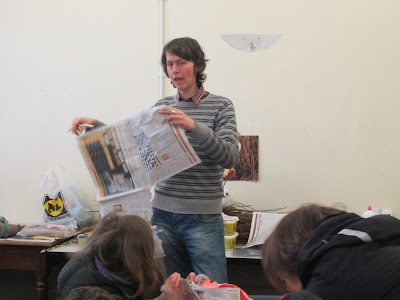 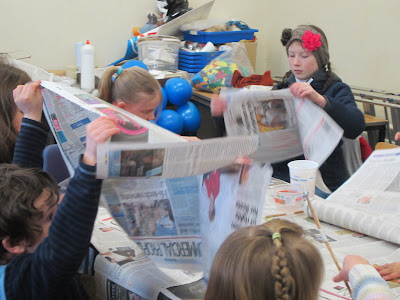 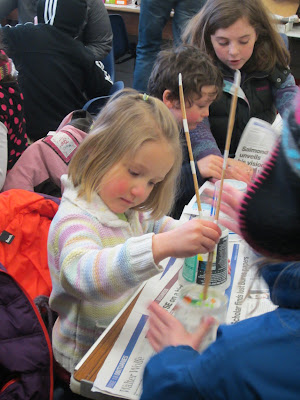 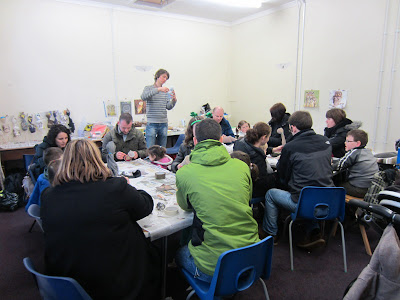 3 - Pull sock over ball of newspaper and secure with elastic band at the neck.


4 - Insert stick into yoghurt pot and pull base of sock over length of tub. Elastic band again around sock below base of tub.

5 - Decorate owl using glue, paper, tissue, feathers to stick on eyes, beak, ear tufts, anything else that you want: 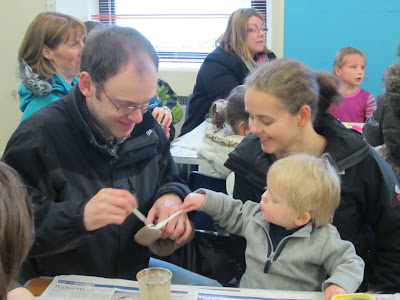 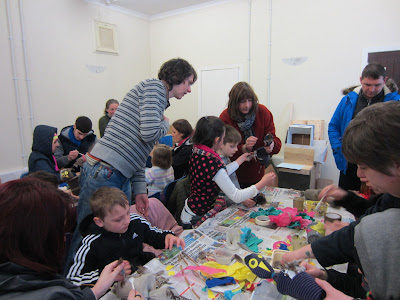 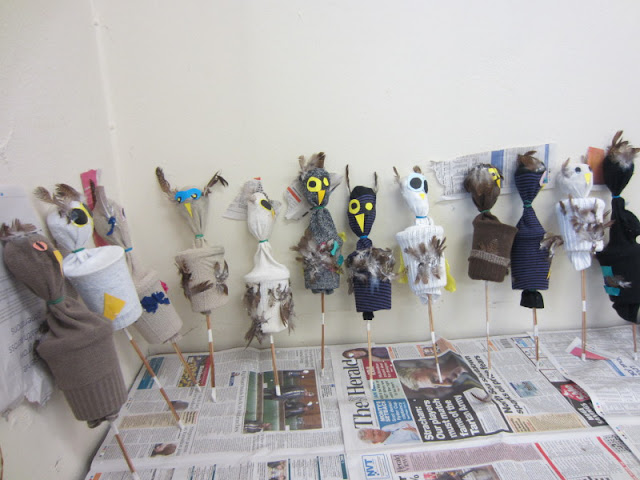 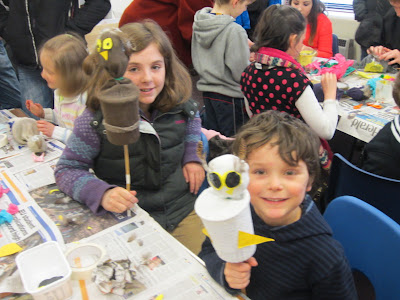 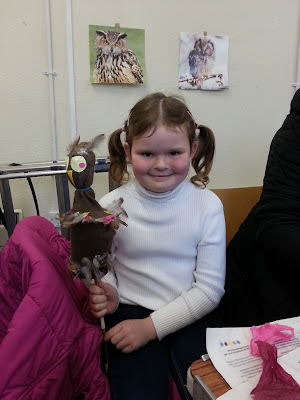 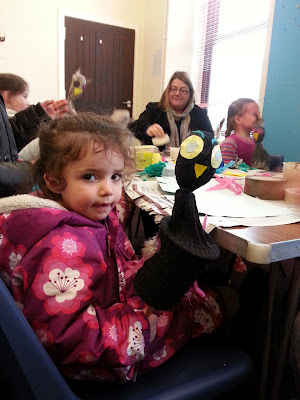 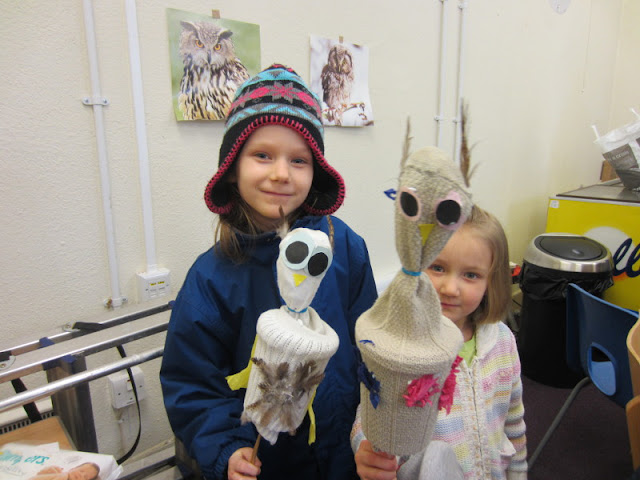 Lots more about the Scottish Owl Centre and Eczema Outreach Scotland by clicking on their names here.

Posted by Leo du Feu Painter of landscape and nature at 1:54 pm 1 comment:


My monthly BTO WeBS count along the Union Canal, Linlithgow to Philpstoun,


The whole morning there was an incredibly strong wind blowing west to east. The return leg of the journey was pretty hard-going and it was impossible to hold binoculars steady enough to scan for the regular snipe at the flood-field. They may have been there but I just couldn't tell.

Flood-field was looking a little less flooded than recently, the areas of water more patchy. I wonder if there are attempts to drain it.


Migrants returning:
Crouching half way down the banking, attempting to steady my binoculars against the wind, I eventually managed to see that the light sandy blobs running around at the edge of the flood-field were wheatears. At least two males and three females. Possibly more of either or both. In the same area were two lapwings. One looking very much as if it might be sitting on a nest: they nest out in the open in a shallow 'scrape' in the ground; they need a clear view all round to watch for predators. Read more here. (You can easily see how human activity might cause nests to fail.)

As I approached Philpstoun suddenly several willow warblers were singing their beautiful descending trill beside me. My first of the year. I got good views as they flitted to and fro across the canal and sang from small trees on either side.

As well as resident chaffinches, tits and goldcrests in the Philpstoun wood, chiffchaffs were singing. So four migrant species on the whole walk, all freshly arrived from their African wintering grounds: chiff chaff, willow warbler, wheatear and sand martin.

On my way back I found a crow beside the towpath, head tucked deeply into its feathers but showing blood on top. It was gently shaking or shivering and obviously had been hurt. It didn't notice me for several minutes even though I was so close. Suddenly it did, and flew away to alight in a tree beyond the Linlithgow allotments. I think it had probably been blown into the overhead cables by the gusting wind.

All other water birds eligible for WeBS count:

skylark -  singing intently at various points along the route

song thrush – two, foraging beside a blackbird in fresh-ploughed field

geese – too poor a sighting to identify, but one of the grey species. Flying overhead rather than using canal or surrounding fields.


Perhaps I need to hire a photographer...

Posted by Leo du Feu Painter of landscape and nature at 1:21 pm No comments:

Seven miles north of Helensburgh and 11 south of Arrochar is Garelochhead in Argyll & Bute. It's a little village only an hour from Glasgow Queen Street on the West Highland Line. Four trains run a day, or two an hour to nearby Helensburgh then a half hourly bus. I'd never been although I'd looked down from the train when on my way north.


Jennifer's parents have recently moved to the village and she and I spent the recent Easter weekend with them. We thought we'd be disappointed to lose a base in Edinburgh but actually it's a great move: It's pretty much at the entrance to wilder, more remote upland Scotland. It's got an amazing variety of birds.

The village sits on the northern shore of Gare Loch, only two miles from Faslane naval base. I'm most excited about the birds of course but it's also interesting watching the comings and goings of boats on the water (and once a submarine). A police vessel regularly sweeps the bay and I rather expect I might be questioned as I sit there on the shore with binoculars and sketchbook out. Hopefully my business cards will serve as adequate I.D. ...


Gare Loch is tidal. When the tide is right in water laps at the footpath. When it's right out several hundreds of metres of pebble and shellfish covered mudflats lie between path and waves, to the delight of corvids that congregate to feast. They're all over the beach, the standard all-black carrion crows that were used to in Lothian but also hooded crows (and/or hybrids) with their grey-tabarded bodies and black heads and wings.

The crows have to earn their food - a mussel's tough shell must be cracked before the orange flesh within can be pecked out. Crows spend hours picking up one shell after another and flapping a few metres into the air before dropping them onto the stones below. It takes 2 or 3 attempts to fracture most shells enough to then fully open by beak. Gulls indulge in exactly the same activity.


Garelochhead is small but has very good amenities - a post office, food shops, a bits & pieces shop, a community centre, medical centre, an inn, and ... a cafe, Cafe Craft. On Easter Sunday we had soup there. It's cosy and homely and you get a really friendly welcome. Craft supplies and hand-made jewellery and clothing are for sale and sometimes there are workshops. People seem to drop in for a cup of tea and to do some of knitting or sewing.

After longer than intended in the cafe we set off to explore the slopes west of Garelochhead. We wanted to get onto the ridge to see the view but we weren't sure how able we'd be - parts of the hills are closed off for military reasons. Entry isn't just discouraged by the presence of red flags as in the Pentland Hills near Edinburgh - here by Garelochhead there are fences twice my height, topped with rolls of razor wire. Behind those are a further two fences, each made of three rolls of razor. It's pretty intimidating stuff.

Well downslope of all that we climbed a stile over a regular country fence and walked to a spot with wonderful views north up the length of Loch Long and west to where its waters merge with those of Loch Goil. A little light beacon sits at the join of the two and through my binoculars a castle was visible on the shore of Loch Goil - Carrick Castle, a typical Scottish angular tower. I didn't do any drawing, discouraged perhaps by Turner having beat me to it. His sketch of the Carrick Castle can be seen here on the Tate website along with all 50 pages of his Loch Long sketchbook.

While Jennifer was sending some messages and taking in the view I was thinking on a smaller scale. There were small spherical droppings all over the short cropped rough grass around us, from sheep or rabbits or roe deer or red deer (I'm not very good at this.).

More interesting was what sat among them - many birds get rid of indigestible parts of their food by regurgitating them through the mouth in the form of pellets. Pellets are tightly packed, full of evidence of the bird's diet. You might find fur, feather, bone, shell, plant fragments and more. It's quite possible to tell what bird deposited the pellet, although not yet for me.

At first glance this pellet looked grassy but when I prised it apart the contents were coastal so I suspect it was seaweed. There were shards of mussel and urchin and other shells, including one in a minute spiral, no more than 3mm long, like the horn of a fetal unicorn. I found treasure - three tiny pearls, the largest only about 2mm in diameter. Not enough for a necklace. I think this was the pellet of a gull or a crow, more likely the former, but I'd be delighted to hear if anyone knows better..?

Nearby I photographed a miniature world of red-tipped lichen. Earlier I had photographed strange fungal strands that rose upwards from the roots of a tree. For fans of the Moomins - the closest I've ever seen to real-life hattifatteners. 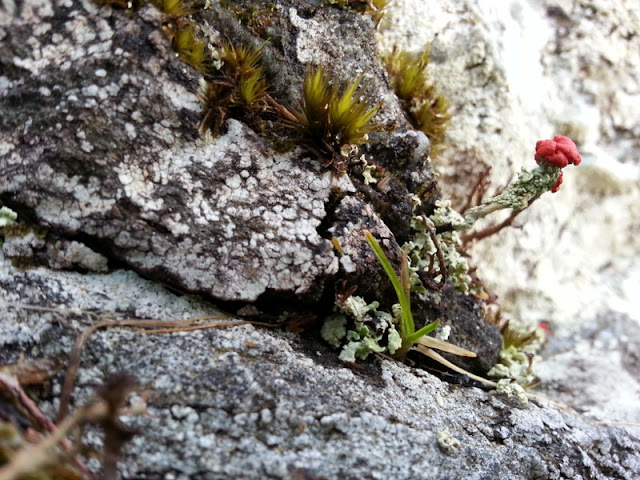 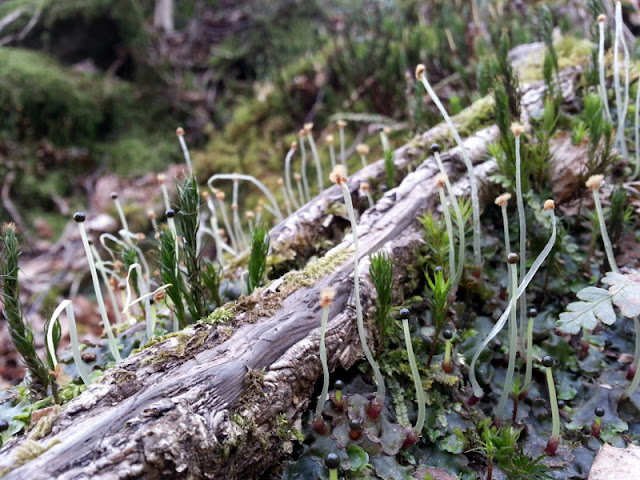 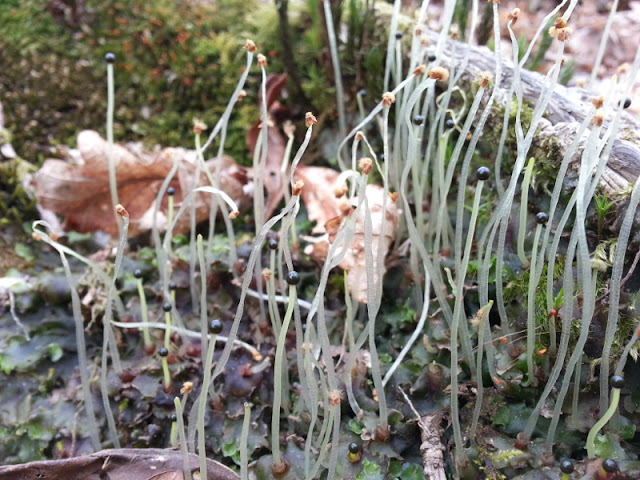 The birds
I saw 48 species in the 4 days we were there, all within 2 kilometres of Garelochhead and all but the last two seen in or from the village itself.

common gull - including one freshly dead and with no obvious injuries other than ruffled neck feathers. I wonder if it might have been caught by a dog, the dog quickly called off by the owner before its teeth had punctured the skin. A good opportunity to see the thick soft down that covers and insulates the body under its exterior feathers, and the size of the wings when you spread them open.

black headed gull
redshank
oystercatcher - many tens, all over the shore


curlew
eider
mallard
little grebe - 3, they surprised me, out in the bay

black guillemot - 1
Canada goose - 1, alone, far out on the loch

lesser black-backed gull
dipper - where a stream leads into the bay. I sat and sketched here, bridge and bird. The bird part was majorly interrupted by two poorly controlled dogs that decided to come and try to rub their sopping wet selves all over me and my work.


Posted by Leo du Feu Painter of landscape and nature at 5:20 pm No comments: