Finally a return to sketching with Kittie (Kittie Jones artist - www.kittiejones.com). Our first day, we think, for six months. We were back at our favourite spot on the Fife coast near Aberdour, travelling by train (two an hour from Edinburgh for Kittie, two an hour from Burntisland for me.)

Four and a half good hours of work in pen and ink, pen and brush, graphite pencil, coloured pencil, watercolour and gouache. An atmospheric day of quite thick fog. Inchcolm was showing, but we never could see as far as Edinburgh and the Lothian coast. A good amount of birdlife around - species seen in total. Also many seals in the water and two roe deer treading through gorse and scrub.


and where they were created... 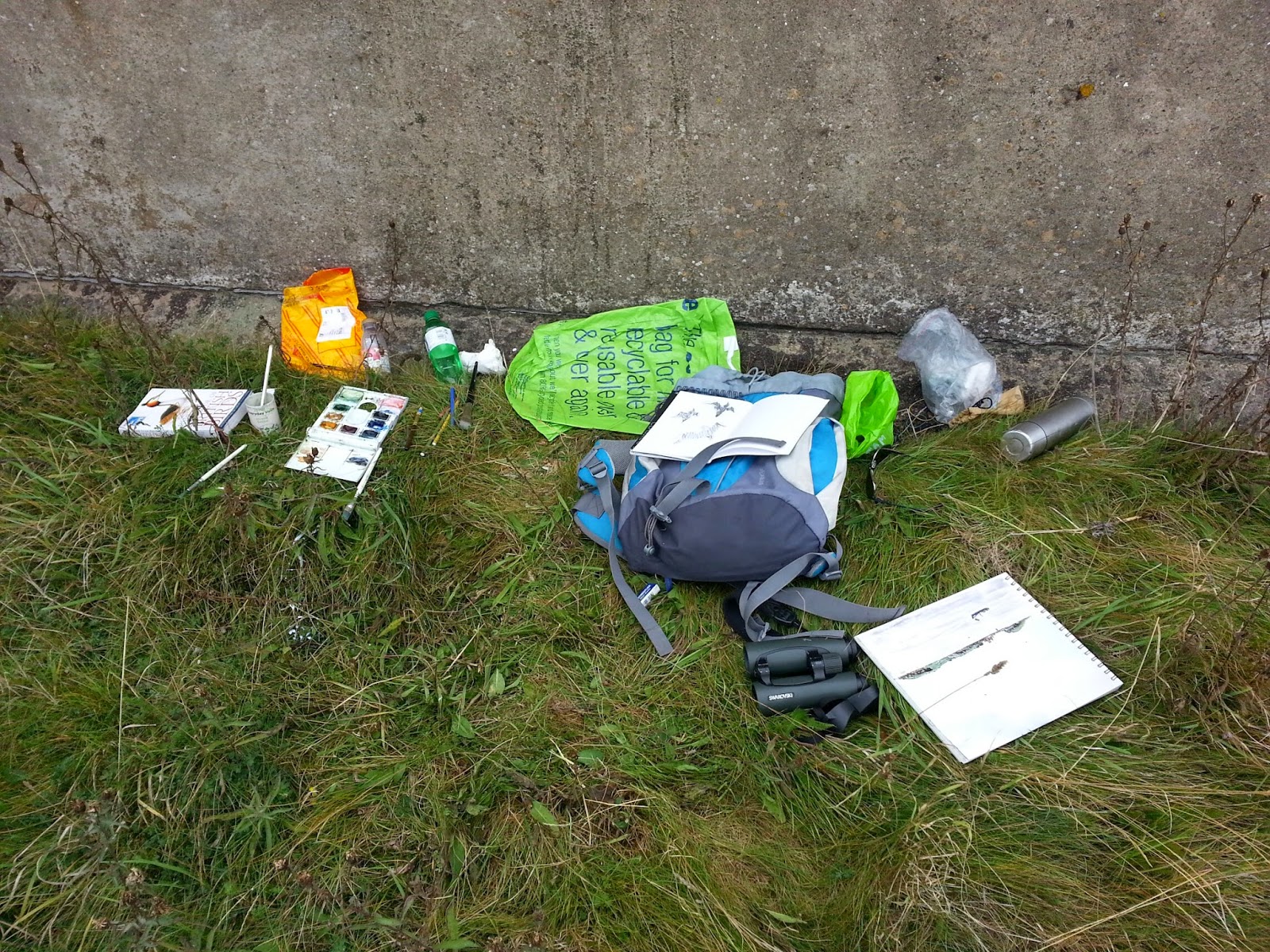 
Two unusual bird sightings - a whimbrel and an arctic skua. Neither are by any means unheard of in the area but neither are they frequently seen, especially whimbrel. I've only twice before seen whimbrel and only seen skuas up and around Orkney and Shetland. Skuas are well known as using the Forth to cross the country from west to east and east to west. This particular skua was around for many minutes, showing large and dark against the fog and beside the sandwich terns that it chased, twisting turning diving in its attempts at any fish they were carrying. 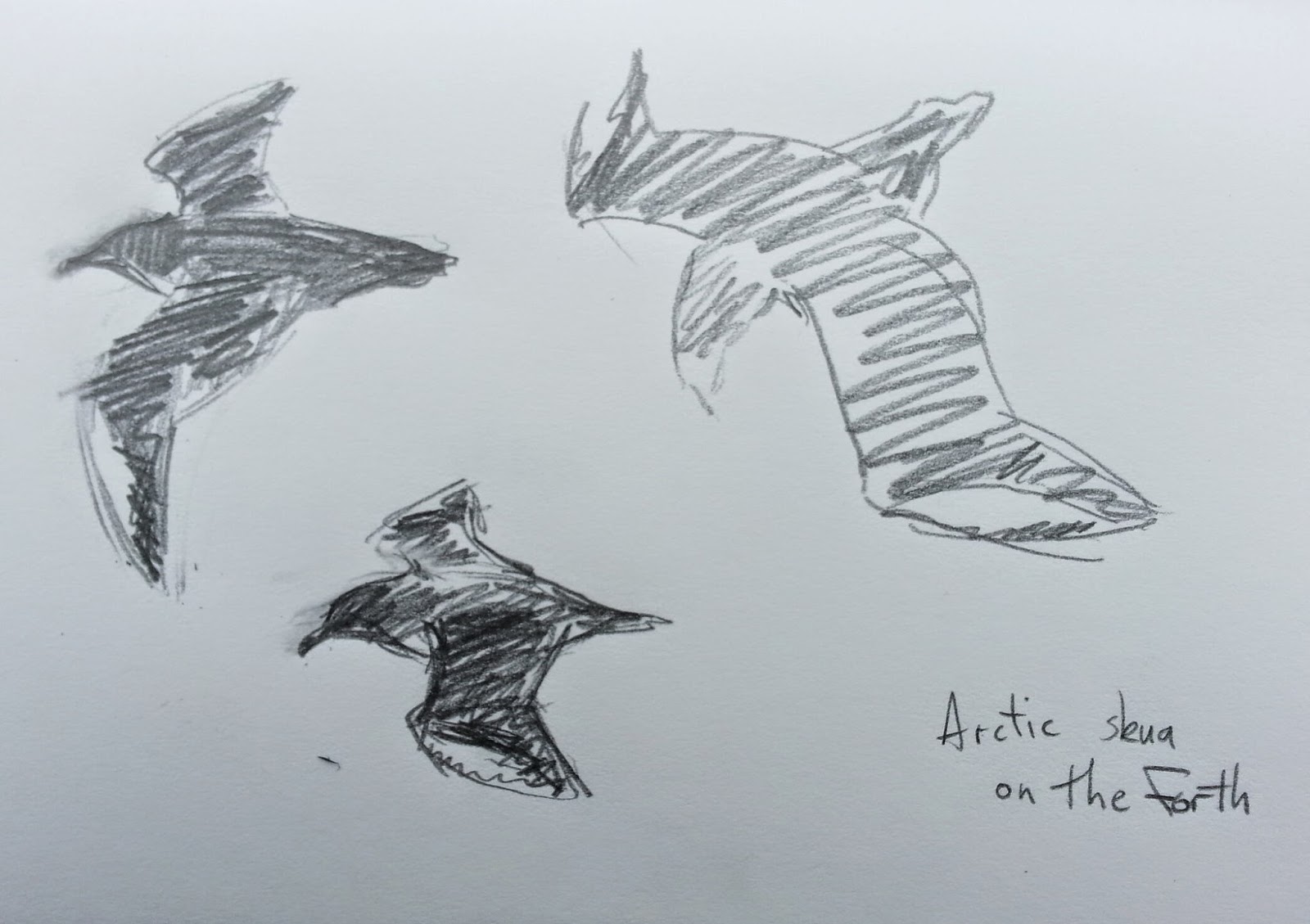 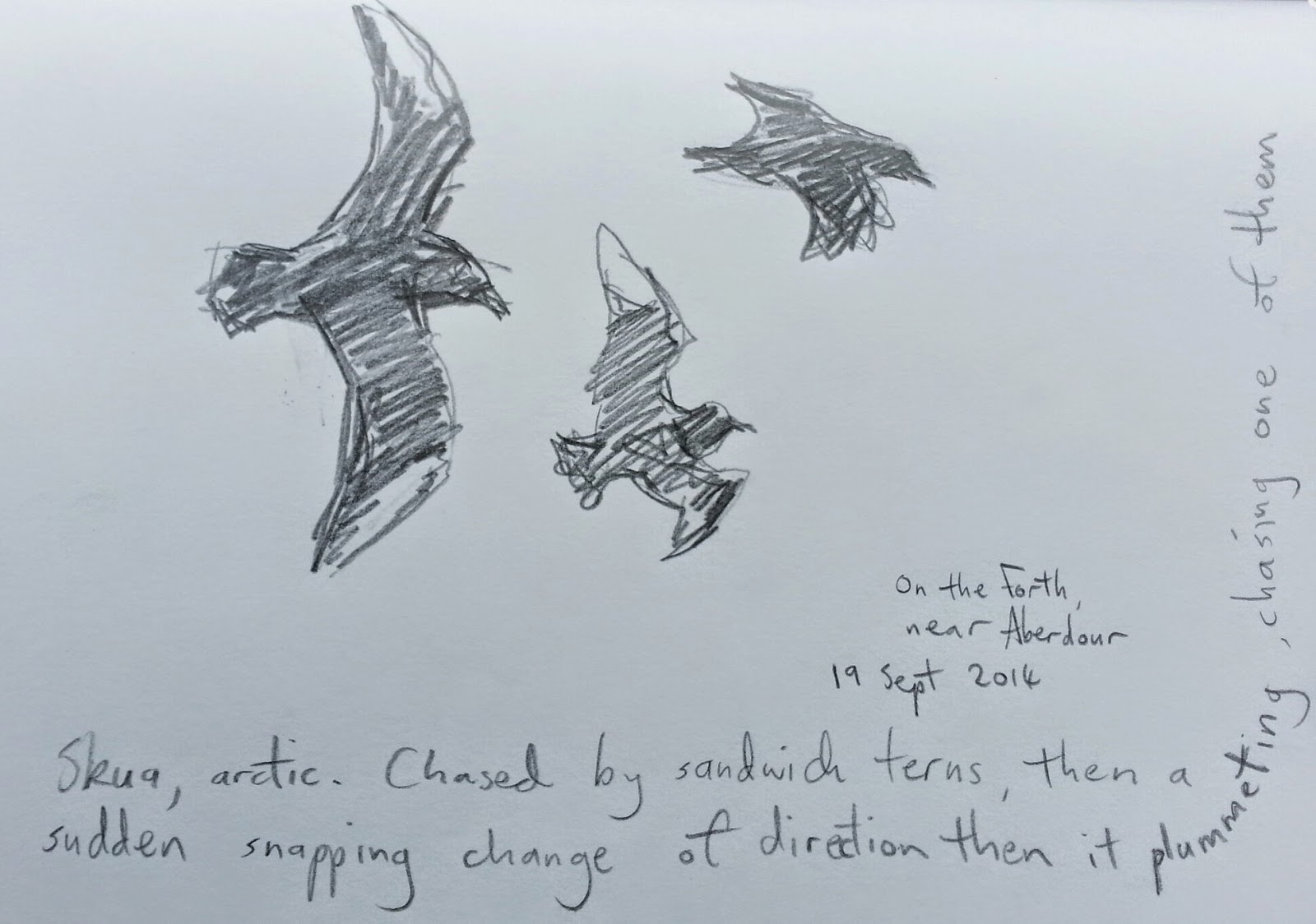 The whimbrel was close to me on the shore although unfortunately it saw me before I saw it, so I didn't see it for long. Whimbrel are very like curlew only overall smaller with a shorter, more kinked than curved beak and very distinctive dark streaks through eye and along top of the head. BTO curlew v's whimbrel i.d. video here and a photo of the whimbrel we saw in Ireland earlier this year (see Ireland blog post). 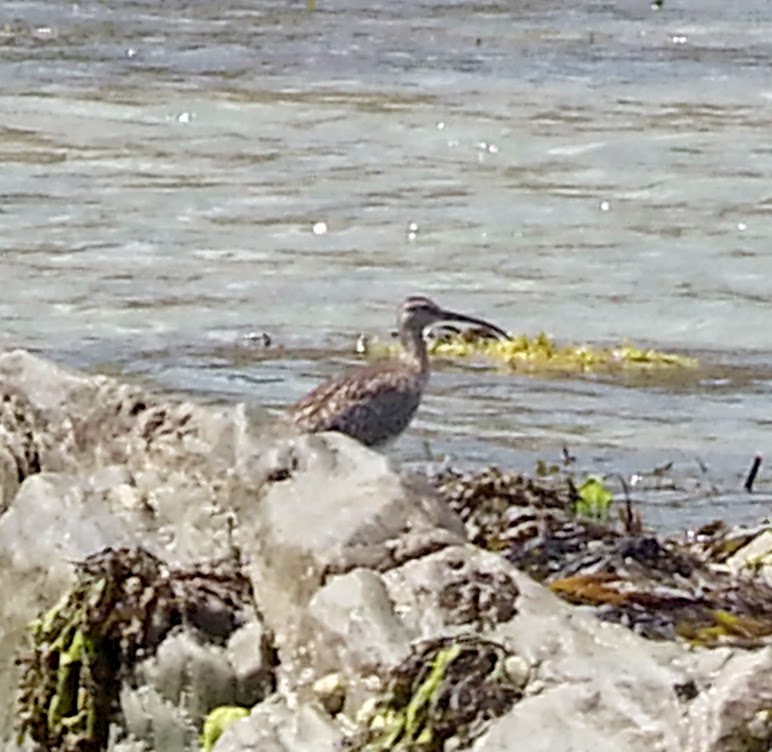 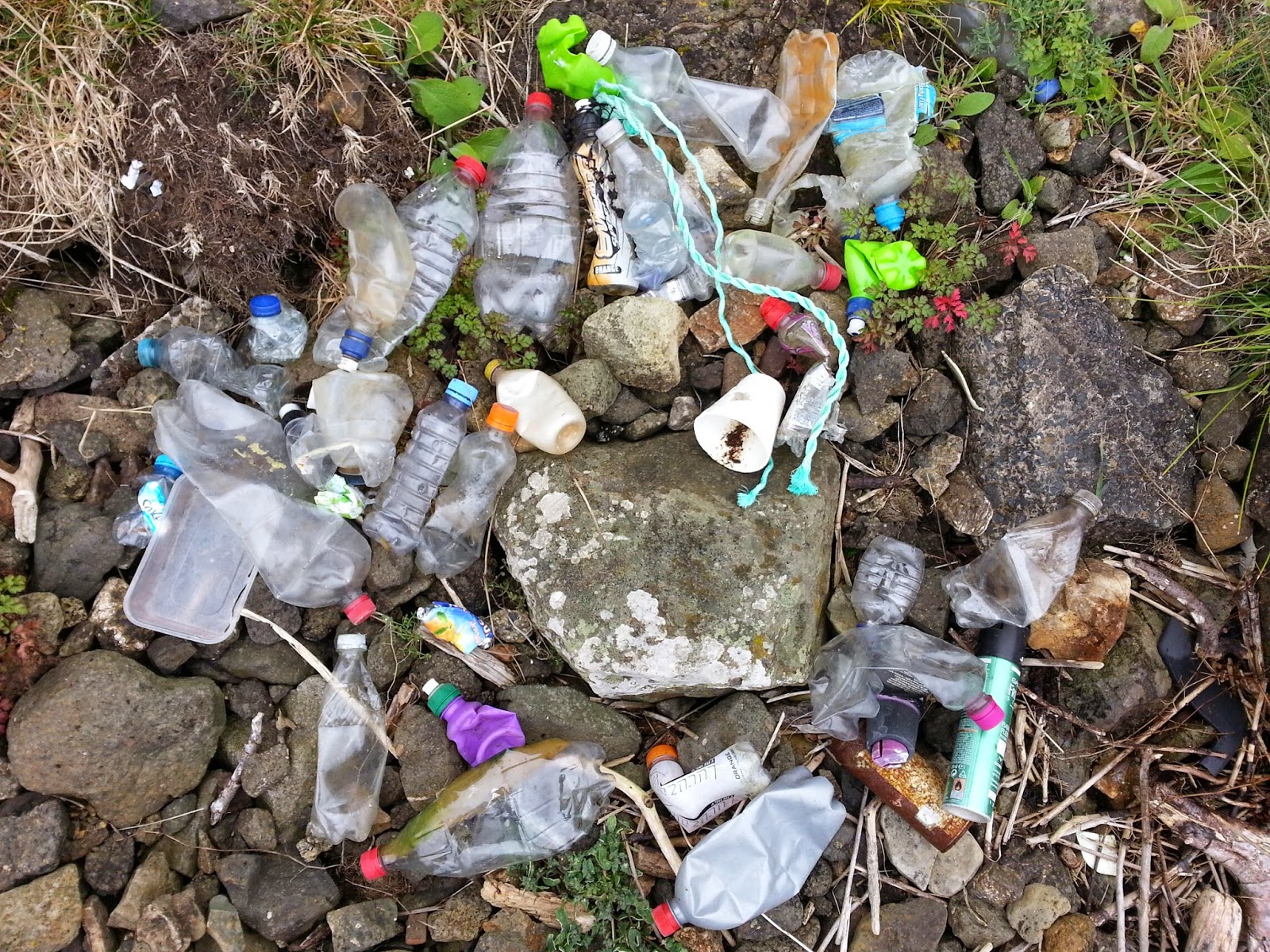 Two skeins of geese flew over high above. About a hundred and fifty birds honking their low calls. Greylags. Autumn is here.


How to get there:
Trains to Aberdour run half hourly from Edinburgh. An adult return is currently £10 on-peak, £7.20 off-peak. Timetable here.

Many thanks to ScotRail for their generous support of my work to explore Scotland by Rail. 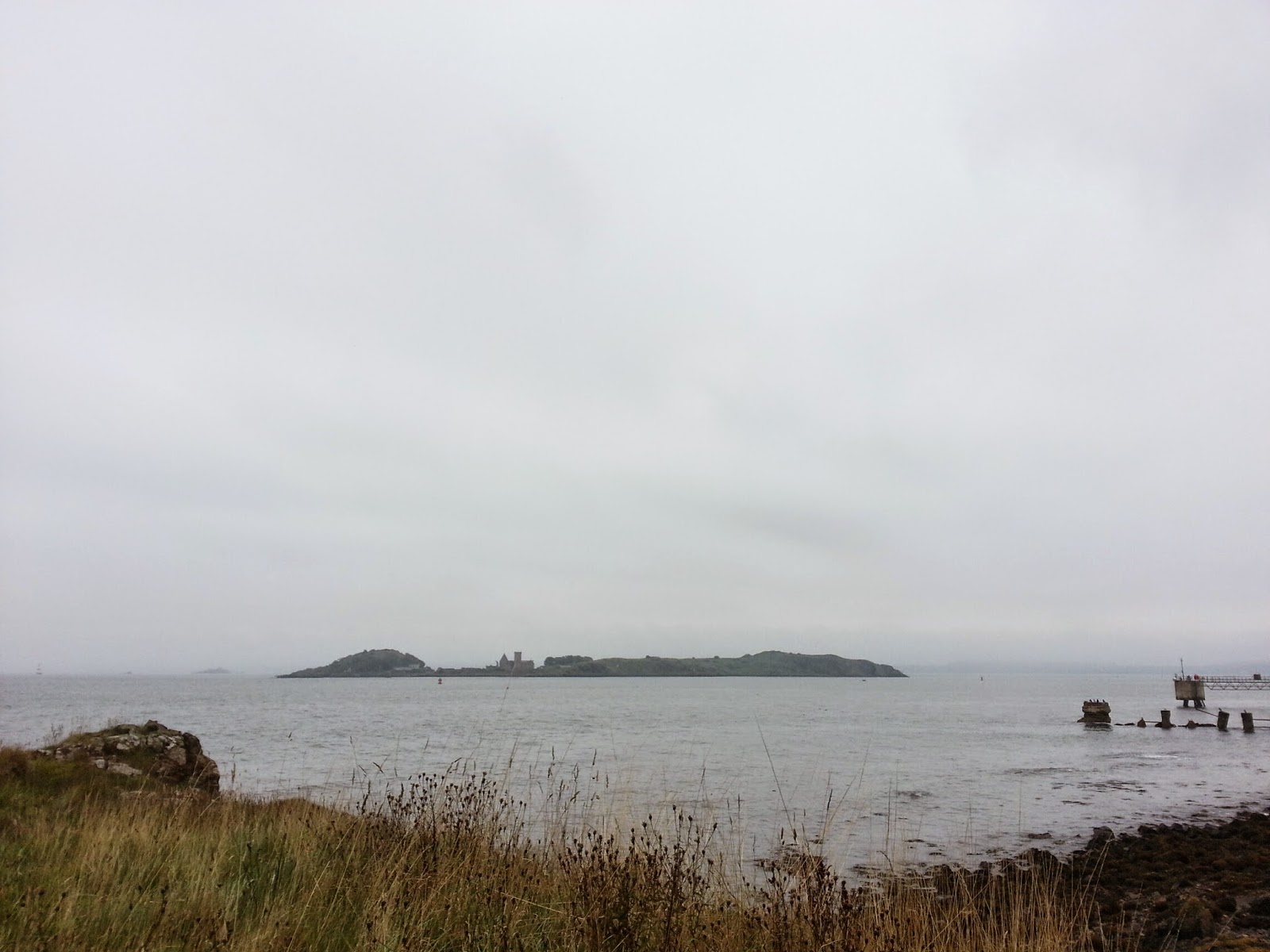