Every year the choirs and orchestra of Heriot-Watt University perform in St Giles Cathedral in Edinburgh as part of the St Giles at Six series. Last night it was the turn of the choirs. I sat by the organ, away from the crowd, and made a sketch. Next Sunday the orchestra will be performing Beethoven's Symphony no. 3, Eroica, 6-7pm, admission free.


Heriot-Watt is extremely musically active under the direction of Steve King (Steve also plays viola with the Scottish Chamber Orchestra).

Heriot-Watt choir and orchestra are both open to students, staff and the local community. Concerts are open to all. Full info here.


Posted by Leo du Feu Painter of landscape and nature at 11:11 am No comments:

Email ThisBlogThis!Share to TwitterShare to FacebookShare to Pinterest
Labels: art, places in Scotland

Scotland by Rail , thanks to ScotRail.

Lenzie station, north side (platform 1). Exit, turn immediately left, walk the length of the station car park - now you're in trees at the start of Lenzie Moss.

Lenzie Moss is small, perhaps only a square kilometre - and that little area is one of the very few raised bog habitats still remaining in central Scotland, internationally significant. It's flat of course, it has patches of woodland on its fringes and a loosely circular and well surfaced footpath ringing the site. The path is level all the way, accessible to mobility scooters and wheelchairs and pushchairs. 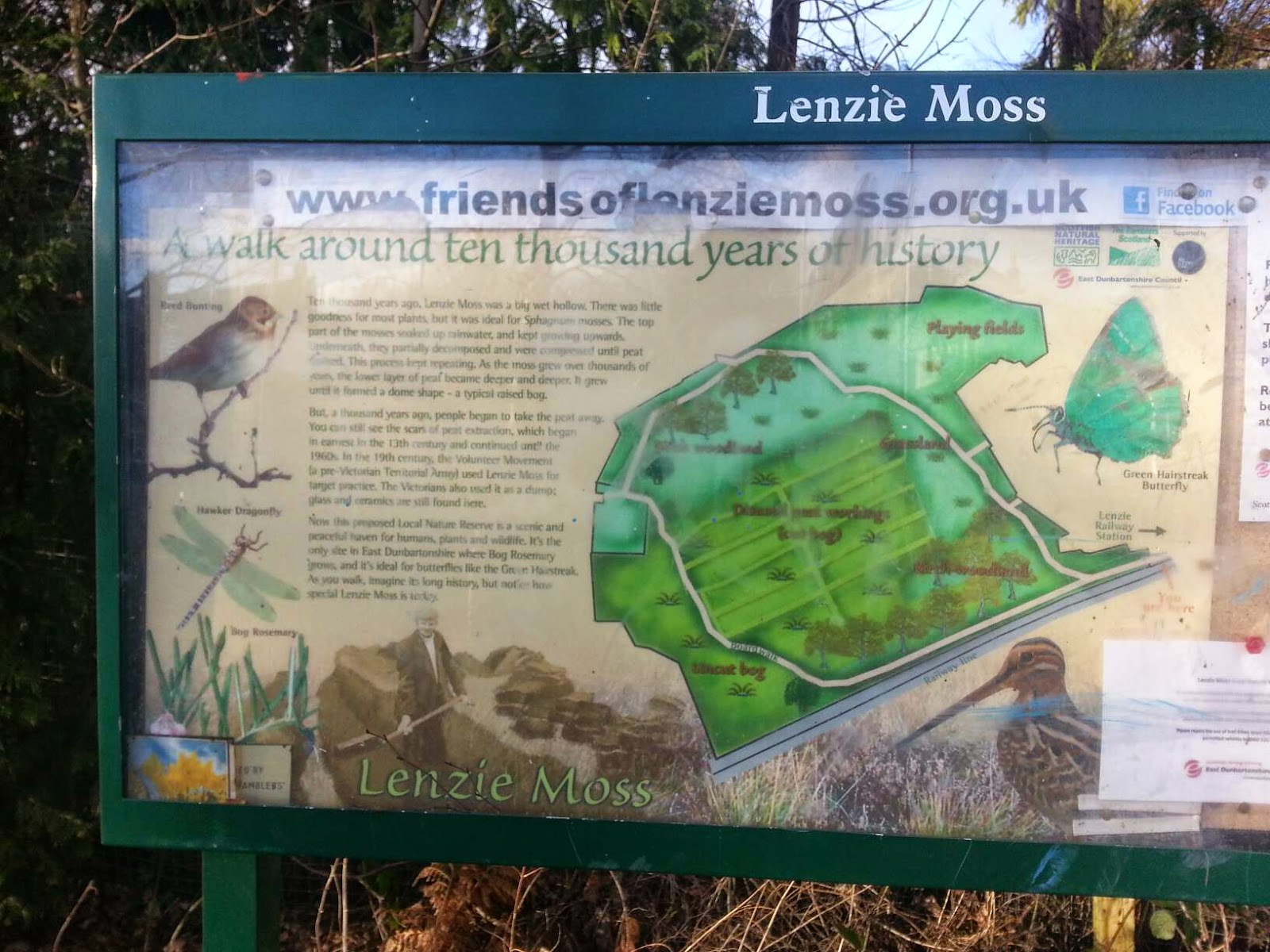 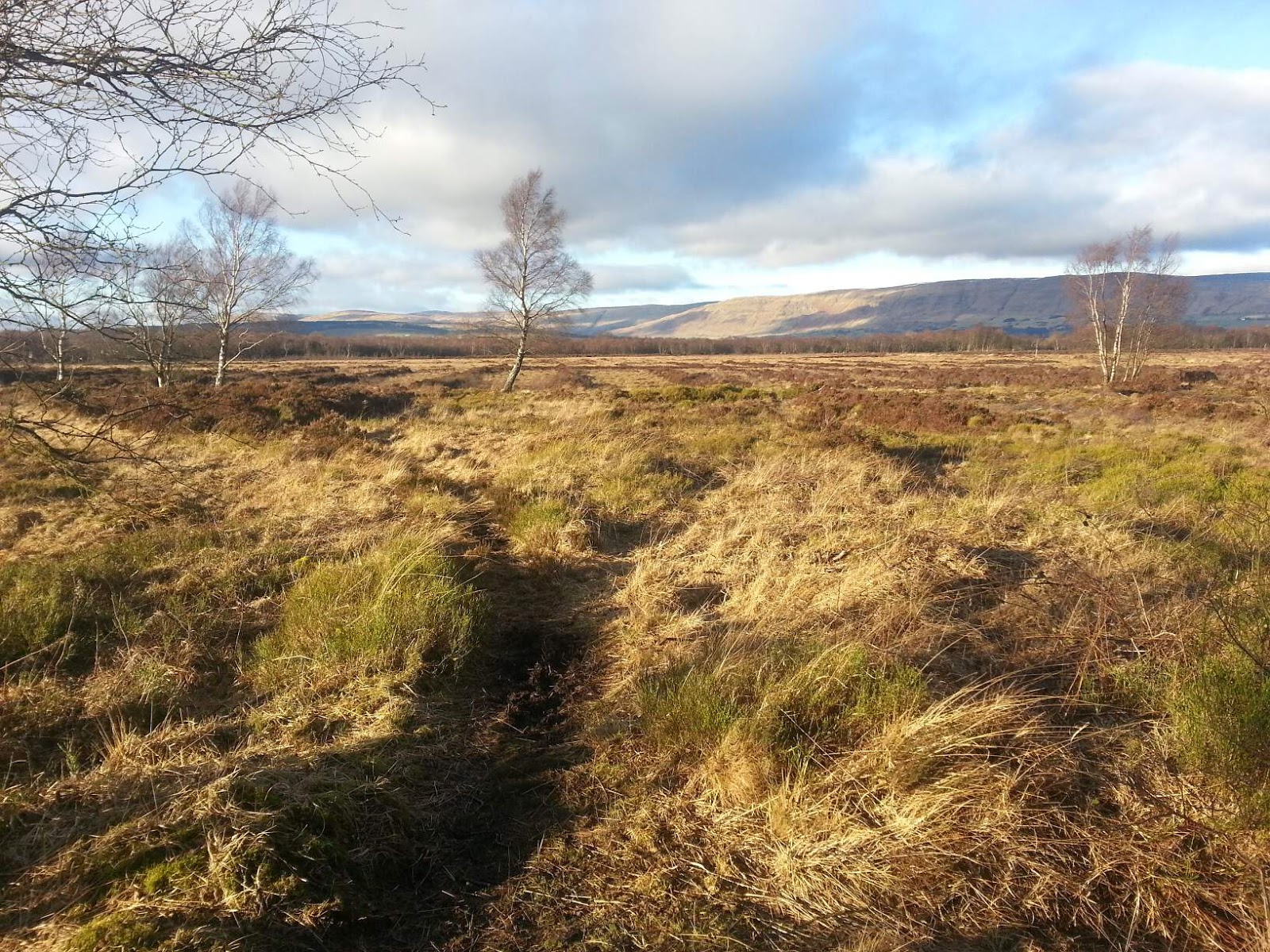 On the Moss you can find the rare and endangered bog rosemary (Andromeda polifolia) and green hairstreak butterfly (Callophrys rubi). There are various orchids, roe deer (the tamest I think I've ever seen), snipe, dragonflies, damselflies, lots of butterfly and moth species. And wonderful sundews. Some photos here on the Friends of Lenzie Moss website - www.friendsoflenziemoss.org.uk and Facebook.

The very active Friends are working under guidance from Scottish Natural Heritage (SNH) to help the Moss rehydrate to its natural wet state, although the project unfortunately has met with some argument. The improvements to retain the bog's natural water involve installing dams and removing scrub and some mature trees. The majority of the clearing had taken place before I visited.


As I passed from station car park to wood I smelled the tangy musky scent of fox. The trees were (/are) predominently birch, white trunks and reddish branch tips glowing golden and crimson in the lowering winter sun. A great or a coal tit sang on repeat, I never can get it clear which of those two sings which song. Trains passed by. Through my binoculars greylag geese fed in a bunch on a field, they flock to this area each winter along with pink-foots. I'd noticed them from the train. Cars rolled past behind them and even further away were the distant tenement-tops of Glasgow.

I was impressed at how clean the area was - despite seeing that the path is very well used by walkers and dogs I only collected 3 cans, 1 plastic bottle, 1 plastic coffee lid, 1 large tetrapac and 1 deflated helium balloon. Believe me, that's good.

( Please please don't release balloons into the skies, they are deadly to all sorts of wildlife, not least marine mammals and seabirds: turtles especially swallow them as jellyfish, the bags knotting in their intestines, leading to slow starvation; seabirds use them in their nests, chicks getting tangled and becoming unable to fly from the nest, leading again to starvation, or to legs and necks getting cut, infected, broken. 'Chinese lanterns' do the same, and plastic bags. More here - www.mcsuk.org )

I couldn't bring myself to pick up the two bags of dog poo that I passed (two isn't at all bad compared to here in Burntisland) and I did notice three separate dog walkers allowing their charges to, well, charge through the bog, which is never good for wildlife. 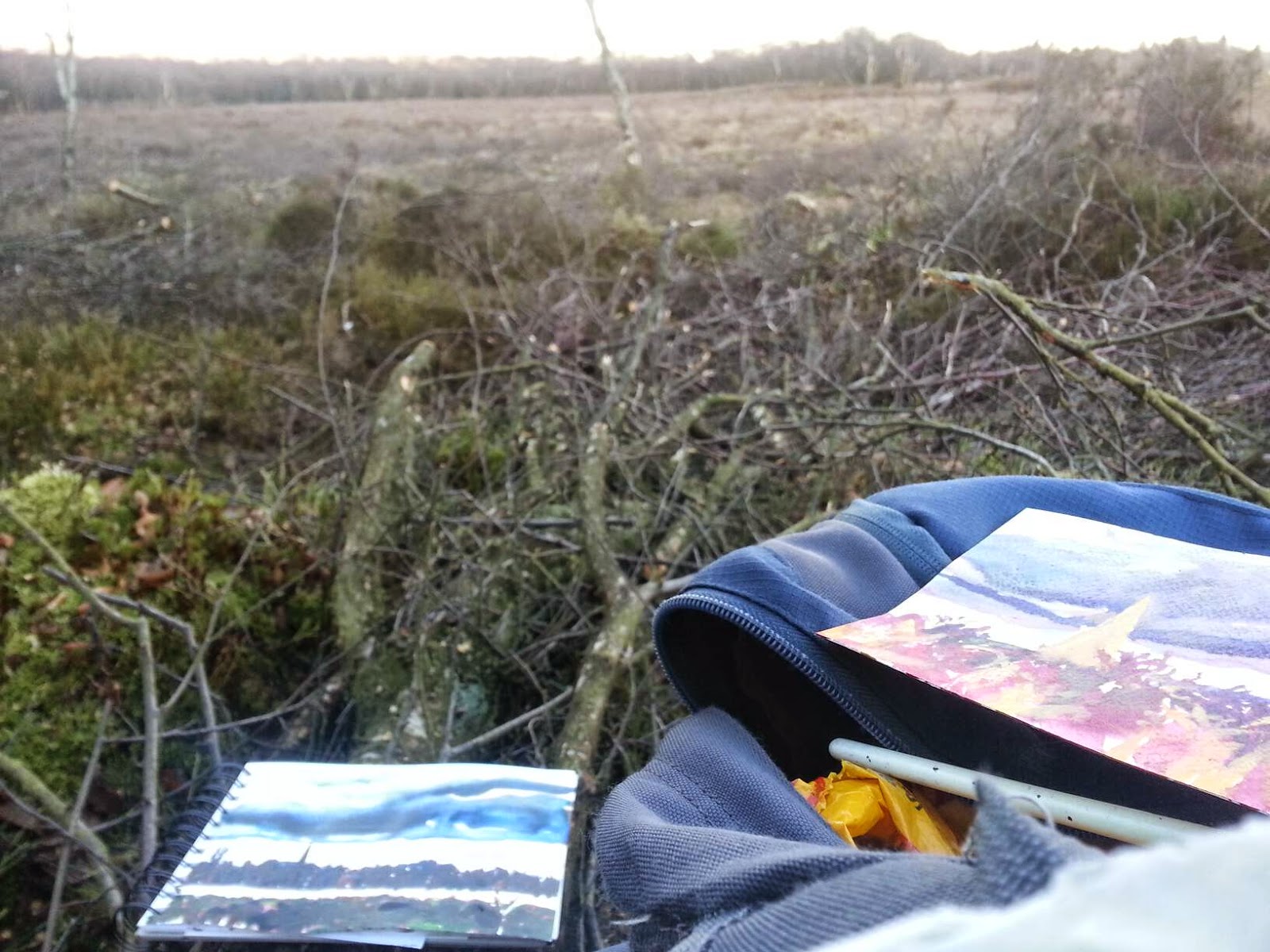 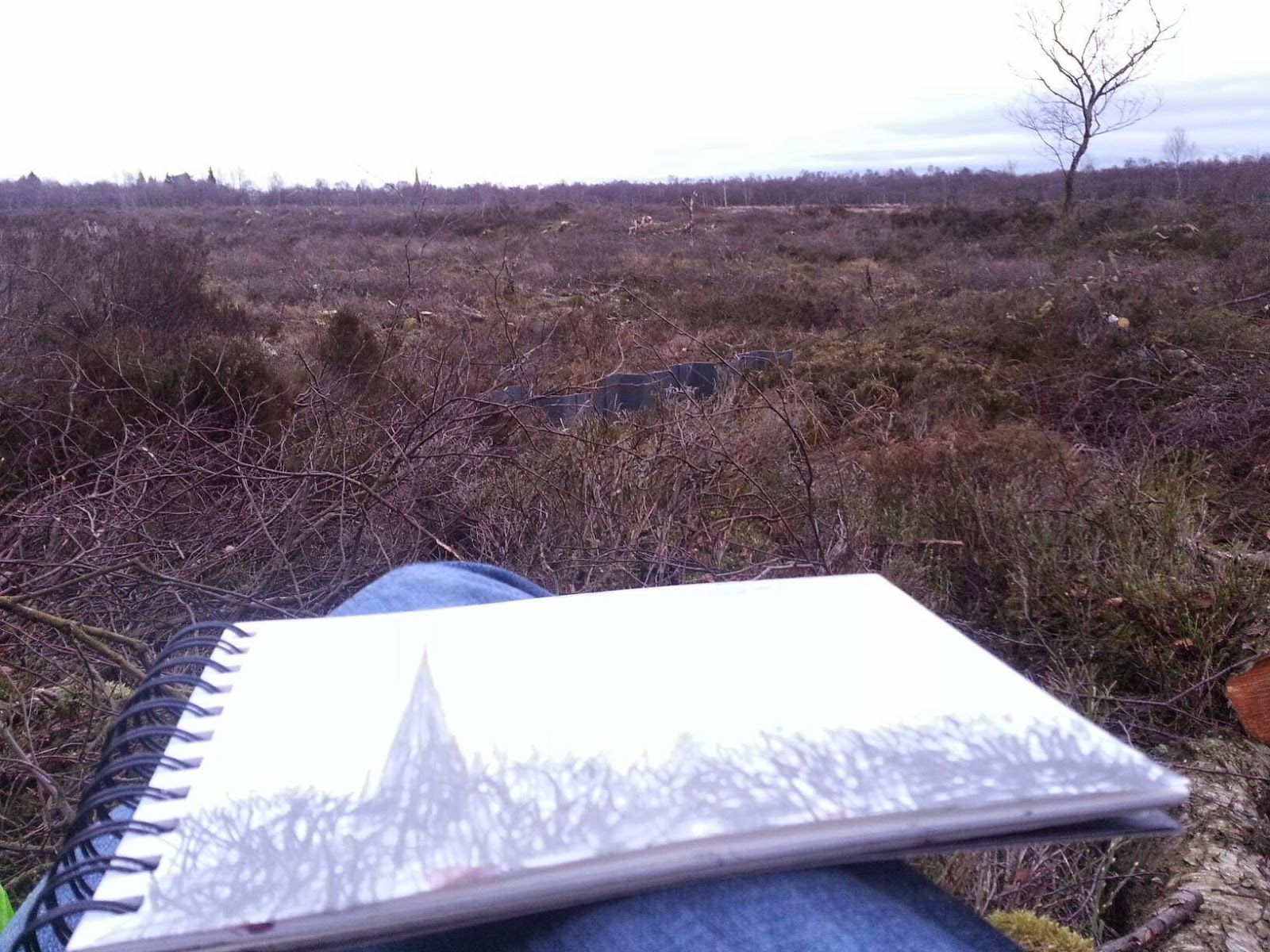 I found a secluded spot in young woodland, looking south across the main body of the bog. I sat an hour and a half, working on two watercolours and a sketch in pencil. The afternoon light and cloudscapes meant shadows and highlights changed by the minute. Six roe deer came within metres of me, very unconcerned by my presence. They look alien this close and face-on. Chunky and thick-necked. A kestrel hovered at the other side of the Moss, only a speck without my binoculars.

Frozen hands, train times and approaching darkness made me move. I finished my circle back in woodland, robins at regular intervals marking their territories with melancholy song. A succession of squeezeboxes losing their air.

A flock of pink-footed geese rippled over in the now half-light, I heard their 'pink pink' calls grow louder as they approached, quieter as they passed overhead and away. They were low, possibly coming in to land on a nearby field.

ScotRail runs regular trains to Lenzie from Glasgow and Edinburgh.
Go to timetables and click on Central Scotland.

Posted by Leo du Feu Painter of landscape and nature at 8:30 pm 1 comment: