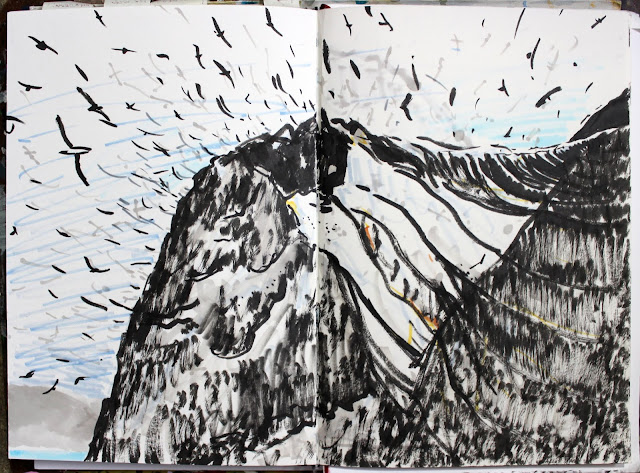 Nature and landscape are what I'm all about, I've lived close to the Forth all my life, I've visited North Berwick lots, seabirds are a particular inspiration ever since beginning my stays on the Isle of May, so why on earth had I never been out to the Bass Rock? I don't know but it's sorted now.

The Scottish Seabird Centre at North Berwick harbour runs trips to the Bass on many days through the year. You can't land except under special circumstances (for example, spend a lot of money) but £22 gets you an hour or so of boat ride around Craigleith island (puffins, razorbills, guillemots, gulls) then around the Bass Rock (gannets up to 150,000 of them). It costs less if you're a child, or free if you're under three, which Oren is.
- Scottish Seabird Centre
- Bass Rock webcam
- Bass by boat
- Seabird conservation, how you can help

The boat is good, seating is under a perspex roof or fully in the open. We chose the latter for maximum thousands-of-gannets-wheeling-over-your-head impact. If you sit at the rear the thrum of the engine combined with loudspeaker human commentary and loud gannet commentary means hardly anyone hears how much your baby isn't enjoying his first time on a boat.

We were three Scots and three Italians - Silvana, Maurizio and Marco who I'd been sketching, painting, photographing and making banana jokes with on the Isle of May for the past week.
- Marco Preziosi
- Maurizio De Vita
- Silvana Grimaldi

*** See end of this post for Seabird Centre via ScotRail Offers ***


From North Berwick station it's a fifteen minute walk along High Street or shore to the Scottish Seabird Centre. We chose the shore, nice sunny day at the seaside... 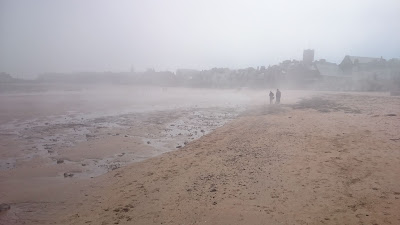 Sea haar. Unexpected but totally atmospheric and not stopping people having fun on the beach, some in bikinis (the Italians were very impressed). 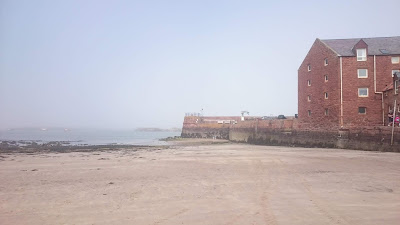 Secretly some of us hoped the fog would stay but as we sat having lunch in the Seabird Centre cafe the sun broke through and the Bass suddenly appeared a couple of miles to the east. 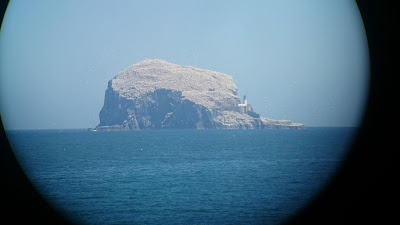 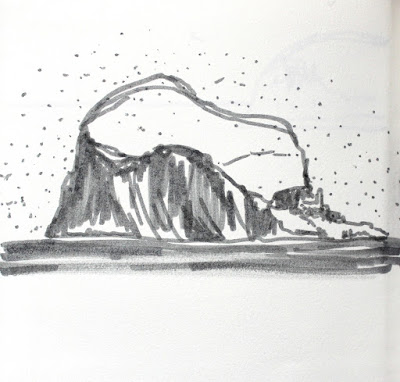 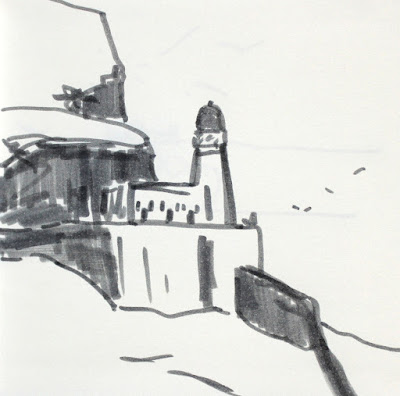 Before the boat we looked around the very good Seabird Centre shop, the ruins of a possibly 7th Century chapel, the harbour and rocky headland. There were no bananas but there was a brilliant patch of wildflower planting on the steps to the harbour. Only a few square metres but containing around thirty species of flowering plants native to the local coastline, some no longer found there because of over-foraging. I saw no butterflies but there were bumblebees aplenty and at least ten Silver Y moths zipping among the flowers. Silver-Ys are day fliers unlike the majority of moths. If more of us would plant little wildflower patches like this, what a difference we could make. 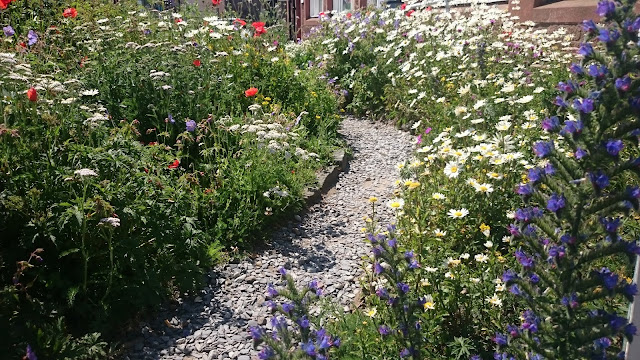 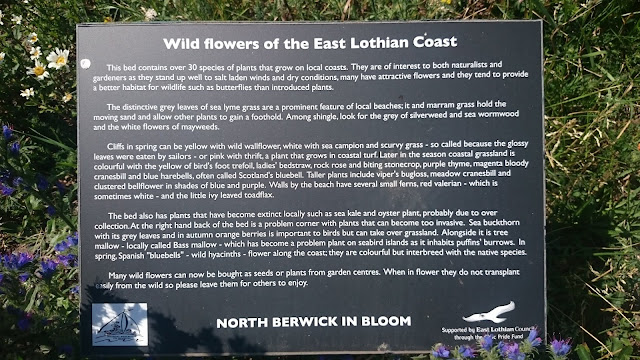 Onto the boat. Craigleith. Then the Bass. I find it hard to know how to describe in words the sight, the sound, the smell of the world's largest colony of Northern gannets. The island is now de-vegetated, almost every possible part colonised by these shining white, black wing-tipped, 6ft-wingspanned seabirds. The colours are sea and sky plus shades of monochrome, lots white of course, and the warmly off-white ochre of gannet head and gannet guano. The island cliffs rise sheer from the waves, exactly as I remember from circumnavigating Stac Lee and Stac an Armin, St Kilda, on a National Trust for Scotland cruise some years ago with my friend Chris. See Chris' book about life as a schoolteacher on the also-remote island of Foula -
- www.abebooks.co.uk/9781907443152/Foula-Time-Life-Christopher-Mylne-1907443150/plp
- www.shetlandtimes.co.uk/2011/10/06/foula-book-an-enthralling-step-back-in-time
- www.scotsman.com/lifestyle/island-on-the-edge-the-challenges-facing-foula-1-2285170/amp 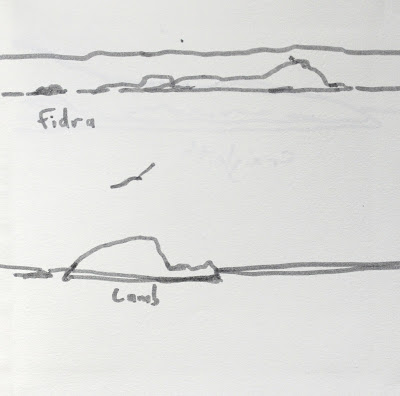 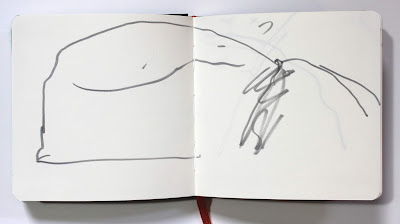 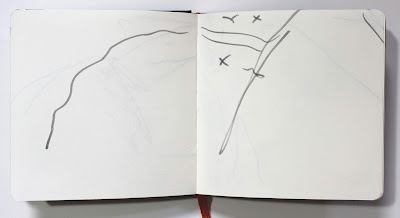 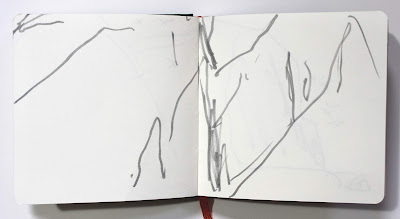 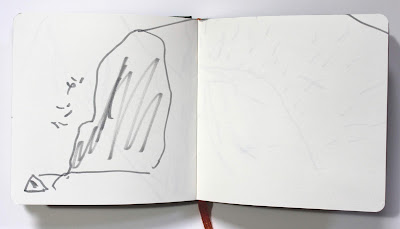 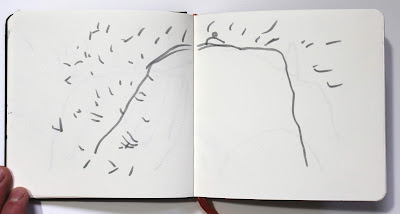 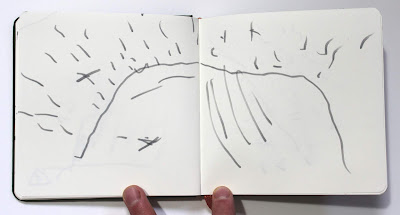 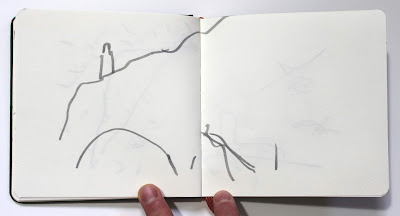 So much to take in and the boat constantly bobbing so I hadn't much time to sketch or photograph or binocular. Probably best would have been to simply stare but instead I tried to do all these things, plus comfort not wholly happy baby. I got the scrappy sketches you've just seen done then made sure when we got home to work up larger drawings to keep the scenes in my mind. Hopefully one day I'll turn them into larger canvasses. I say that about a lot of my sketches. 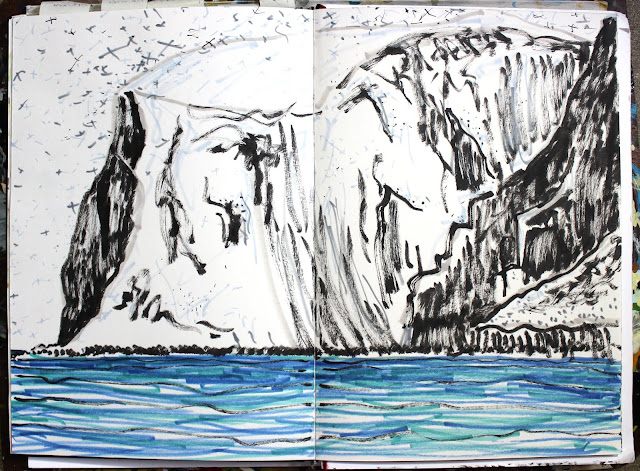 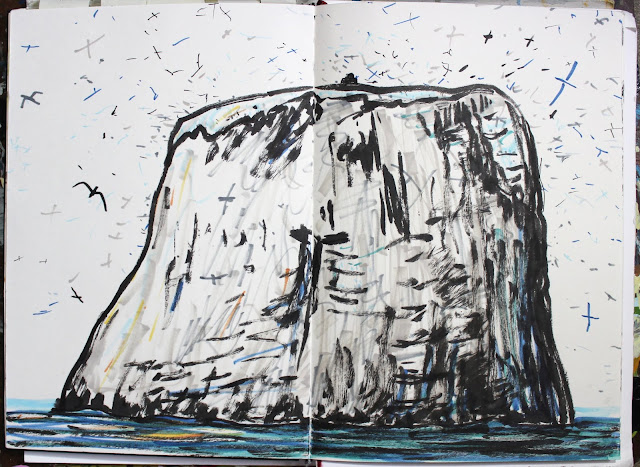 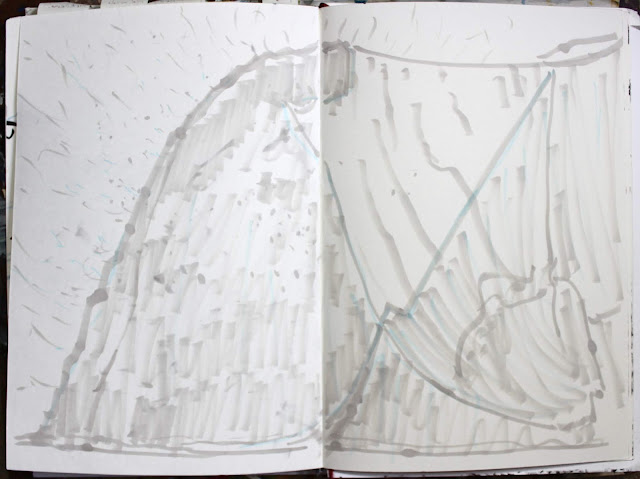 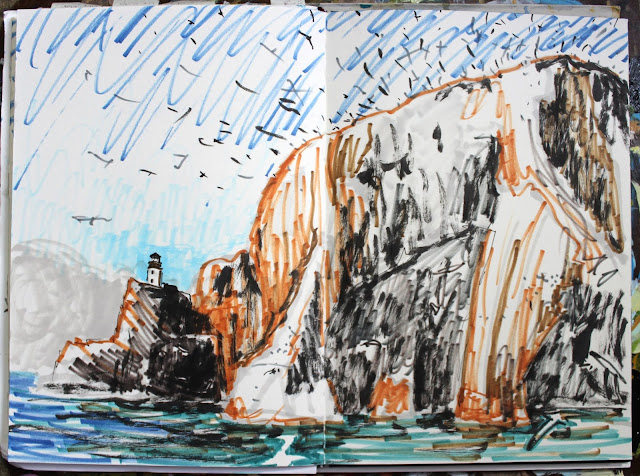 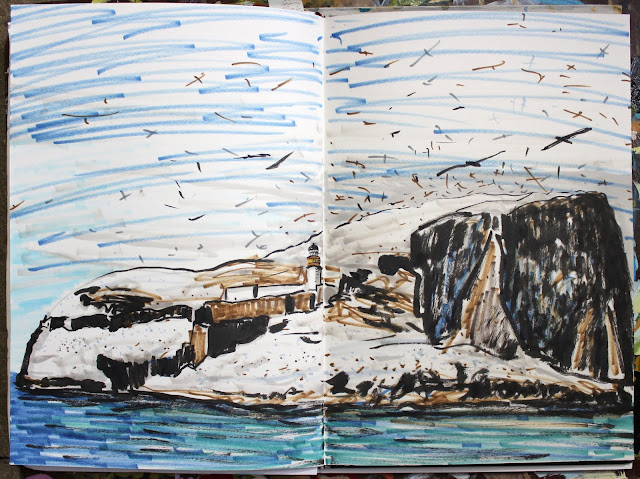 and a few photos: 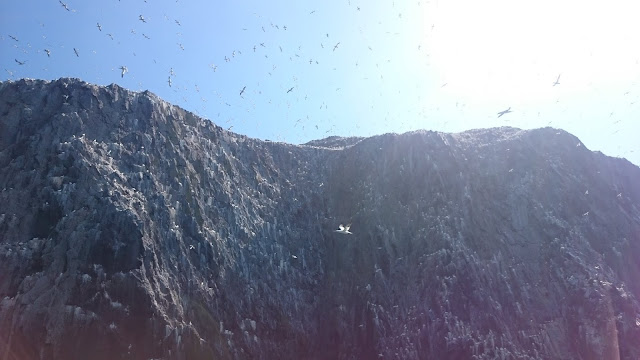 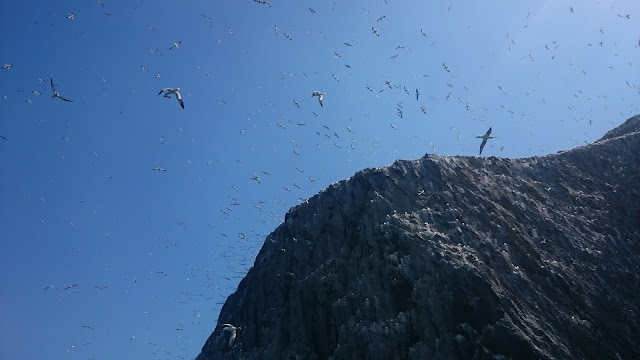 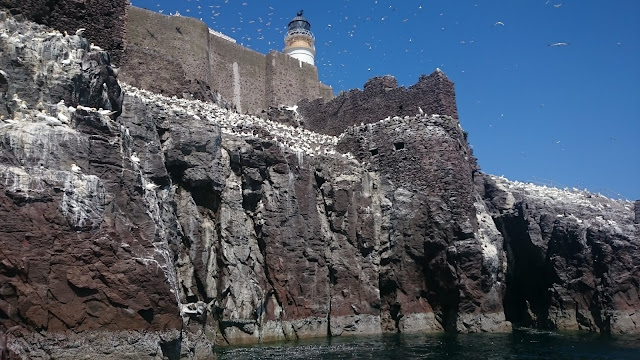 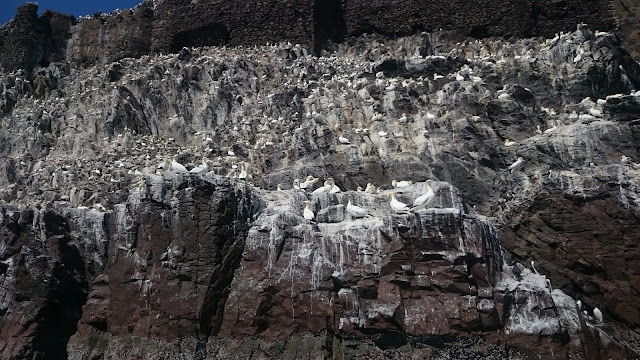 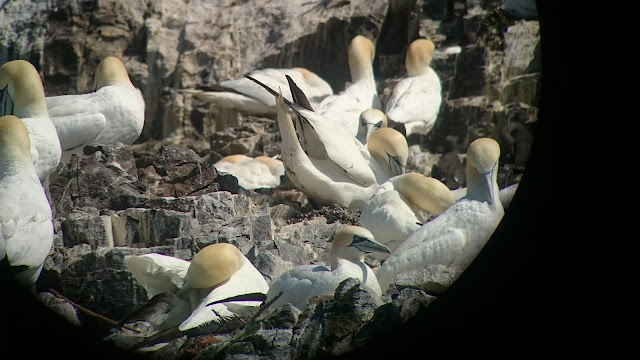 Fascinating blog of a PhD on Bass Rock gannets
- https://gannetresearch.wordpress.com/

Get 2 for 1 entry to seabird Centre when you show a valid ScotRail ticket for the day, until end of 2018
- www.scotrail.co.uk/offers/2for1-attractions/scottish-seabird-centre


Many thanks to ScotRail for enabling and supporting my ongoing Scotland by Rail work. 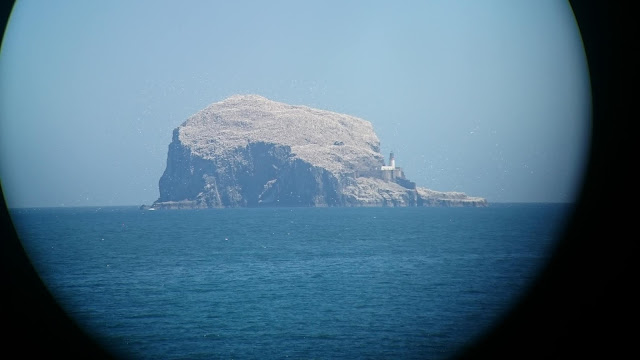 Posted by Leo du Feu Painter of landscape and nature at 12:05 pm No comments: