Dumbarton Castle
- more accurately Dumbarton Rock - stands tall and dramatic on the south shore of the town of Dumbarton. A volcanic plug, a fantasy fortress, sheer cliff sides splitting at the top into two grassed domes. Bits of battlement and building are visible from afar. 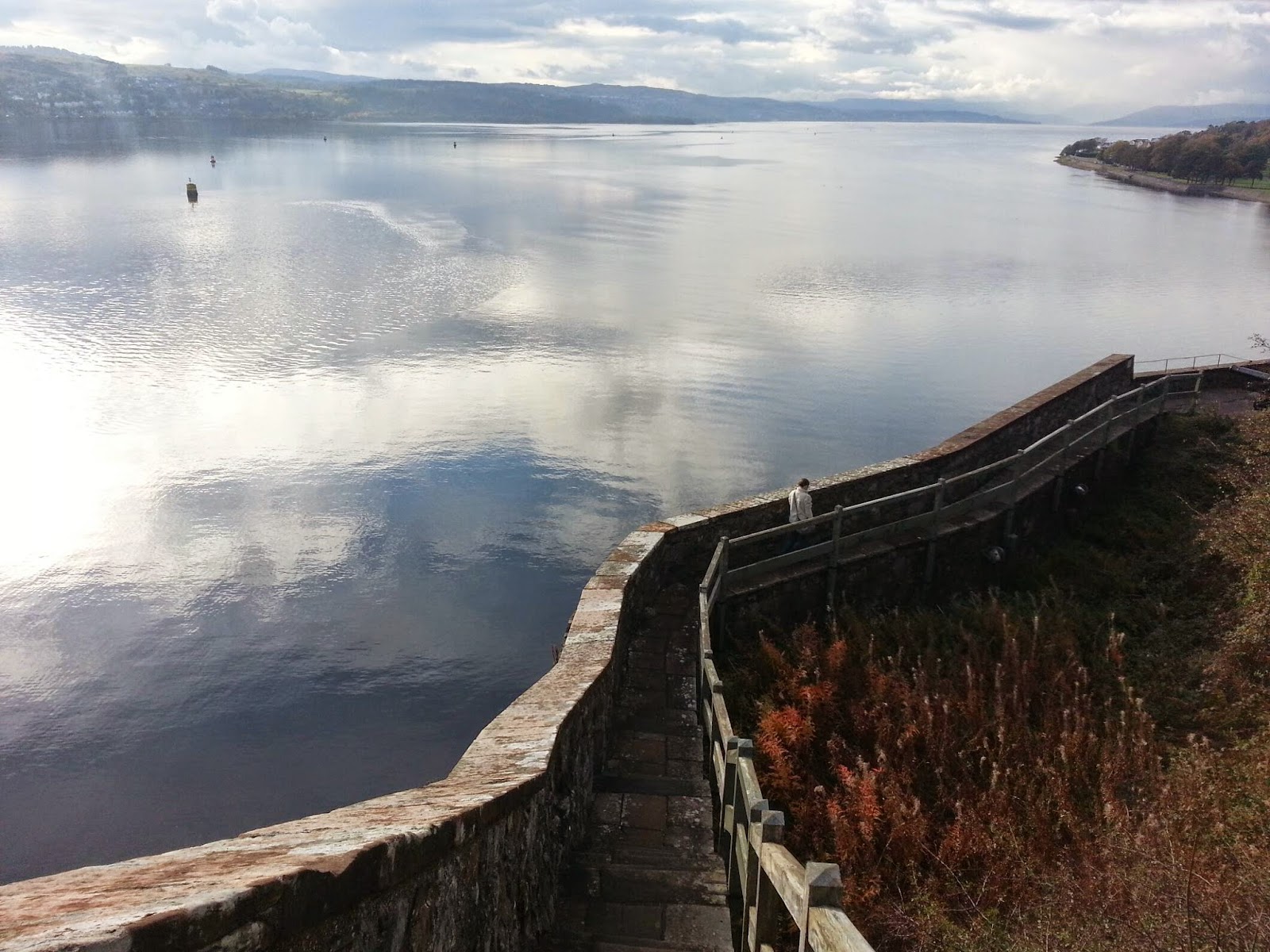 I've admired the rock often when travelling north on the West Highland Lines to Oban or Fort William, or to Jennifer's parents' in Garelochead. I was recently speaking to the Helensburgh branch of the Saltire Society and we decided to make a weekend of it, including a visit to Dumbarton by train. If coming from Glasgow you're spoiled for choice - two trains an hour from Queen Street Low Level platforms, and three stations to choose from when reaching Dumbarton: Dumbarton East is a kilometre from the castle; Dumbarton Central about a kilometre and a half; Dalreoch about two kilometres.


We chose Dalreoch, walking briefly south from the station to cross the River Leven by the Old Dumbarton Bridge rather than the modern and heavily traffic-ed A814 bridge. Old Dumbarton Bridge was built in 1765 on the orders of the Duke of Argyll, keen to have access to Glasgow from his nearby Rosneath estate.


After a short distance on riverside path beside lovely winter-plumaged (no black heads - & in fact even in breeding season the 'black' is actually rich chocolate brown) black-headed gulls preening on the railings we joined the High Street and found a nice friendly cafe with soup for Jennifer and scone for me. Rigo's Bistro - www.tripadvisor.co.uk


From here Dumbarton Rock is only a fifteen minute walk past what was once a large distillery complex and is now waste ground, then past supermarket superstore, then past recent housing estates. Use a map or if you don't mind a few dead ends just keep your eyes on the castle and navigate by instinct.

Dumbarton Rock impresses in every aspect - its size, its shape, its history. Fragments of wine amphoras suggest that Iron Age residents traded with the Romans; it suffered Viking attacks -and capture- in the 9th Century; William Wallace was a prisoner once, maybe; Mary Queen of Scots was here in 1548, waiting for a ship to remove her to the safety of France; In 1489 James IV had the famous - huge and hugely heavy - Mons Meg canon brought from Edinburgh to assist in laying seige to the castle for the second time that year. The second time was successful; In the 17th and early 18th centuries substantial artillery fortifications were built, largely covering all that had been before. These last are what the visitor sees today. 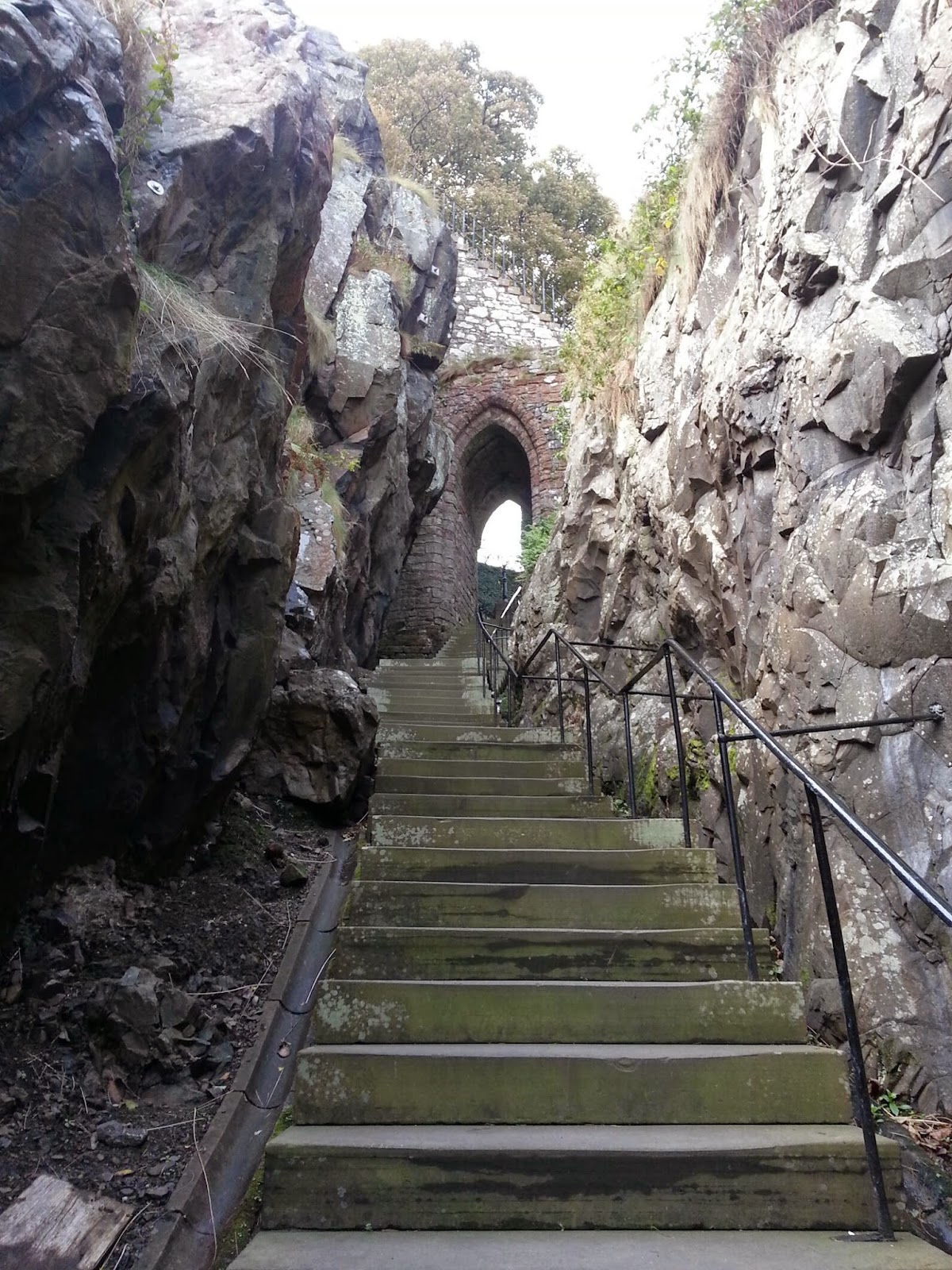 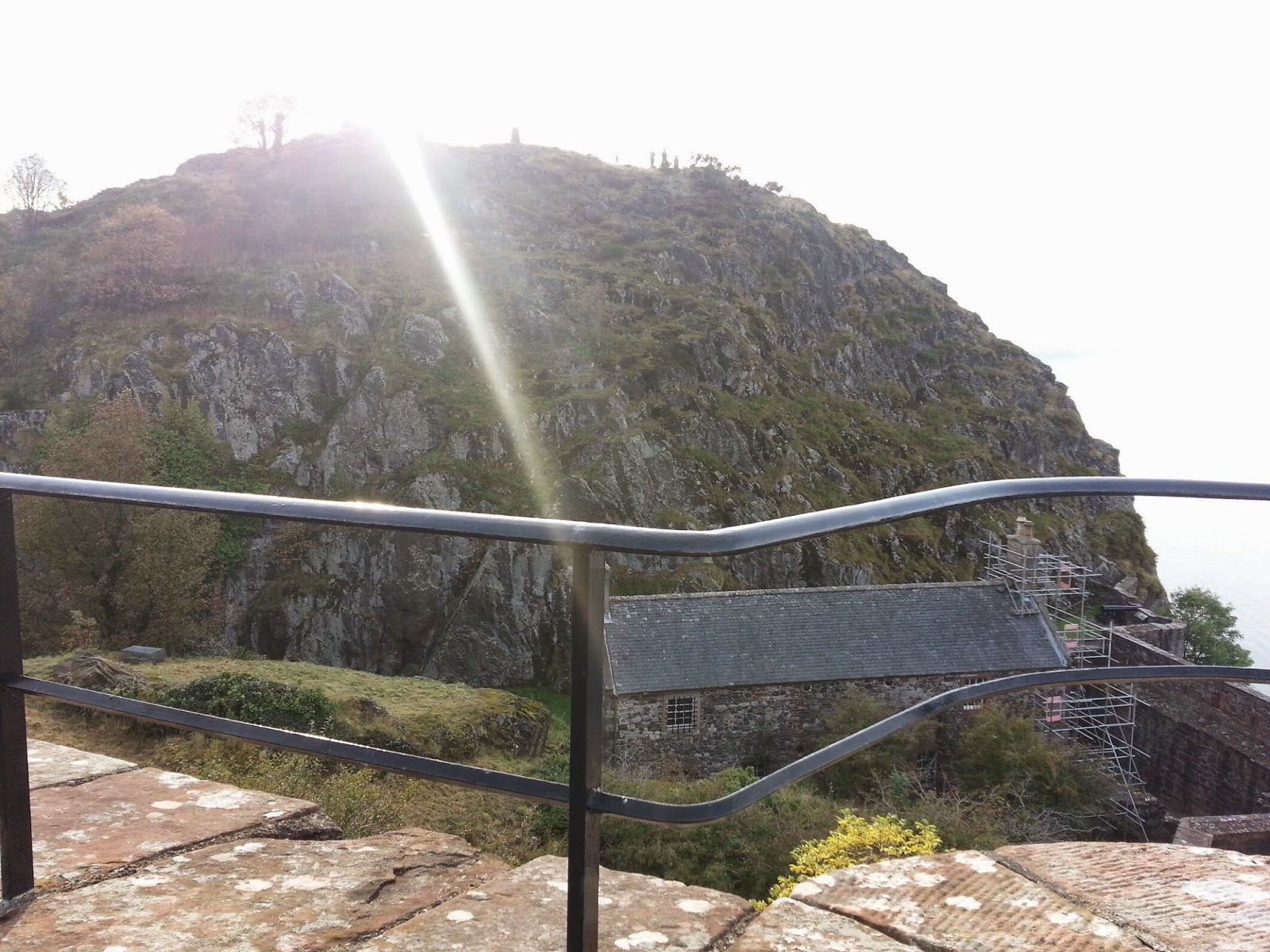 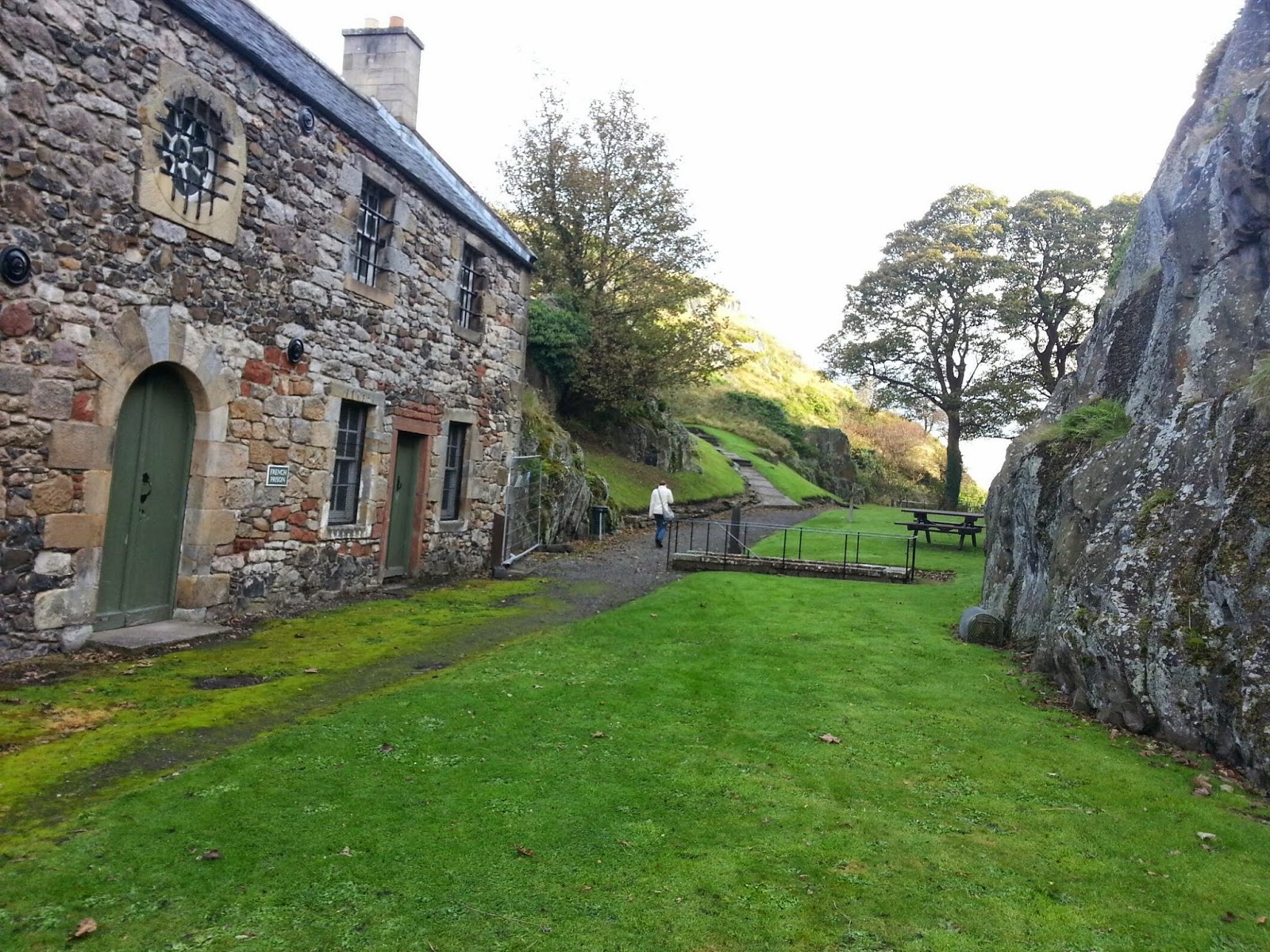 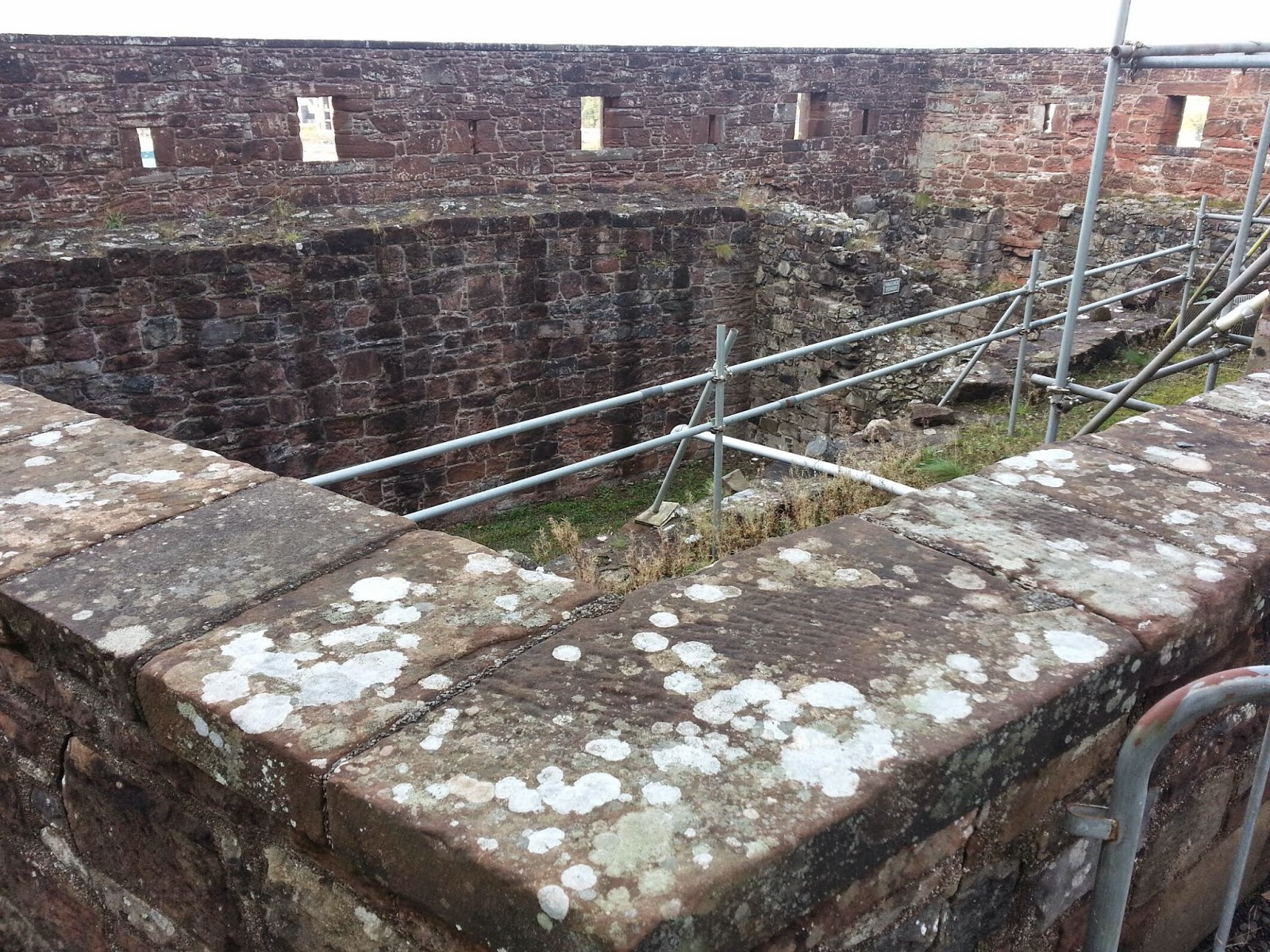 We saw birds - blackbird, robin, song thrush, blue tit, long-tailed tits, flitting and foraging among healthy amounts of shrub and scrub across the rock. A red admiral butterfly on ivy flowers. Gulls and cormorants, a seal on the water. And from the very top, the most fantastic all-around views of Dumbarton, the Clyde, the Erskine Bridge, the Glasgow skyline, Ben Lomond and a horizon of hills. 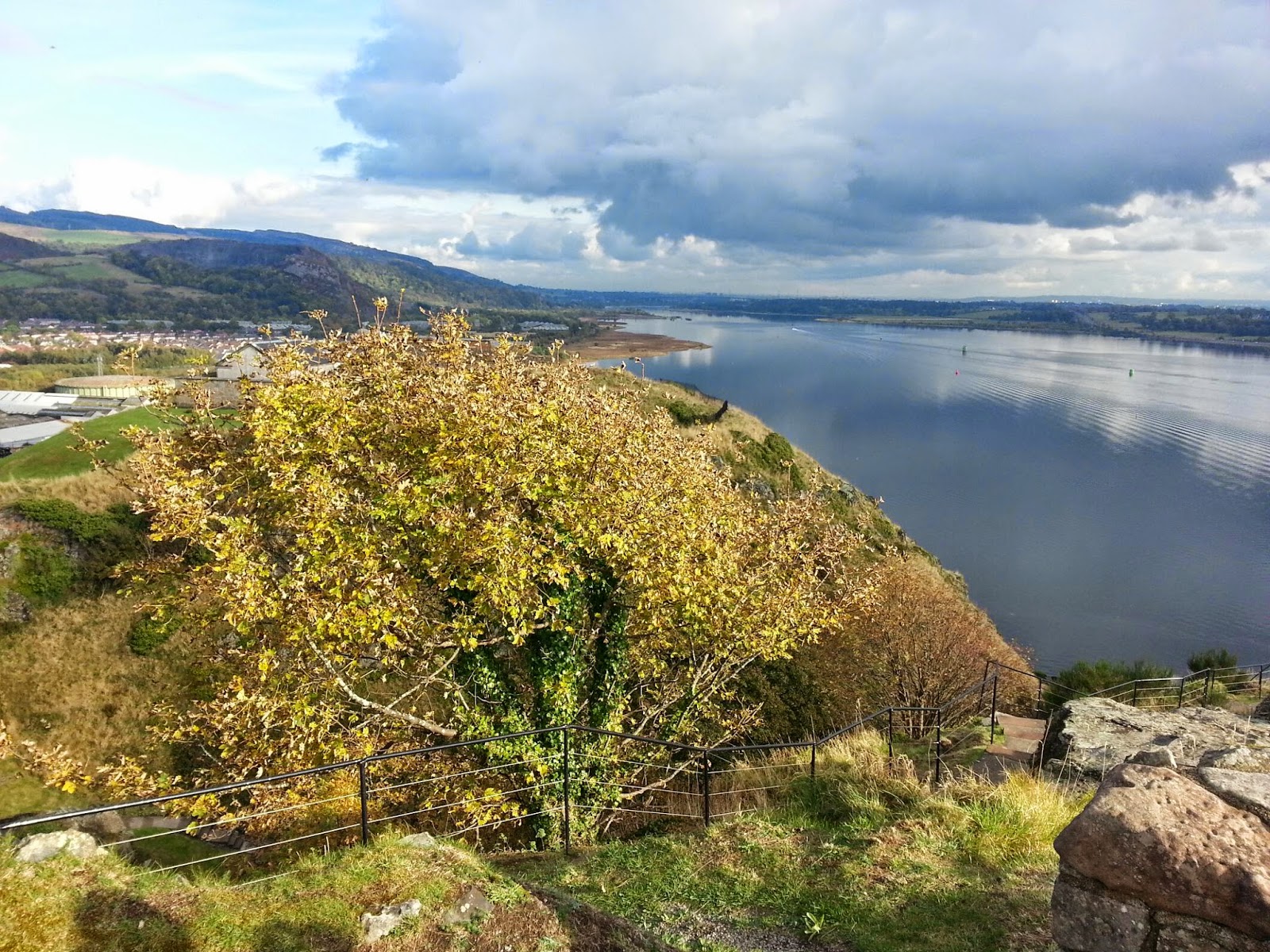 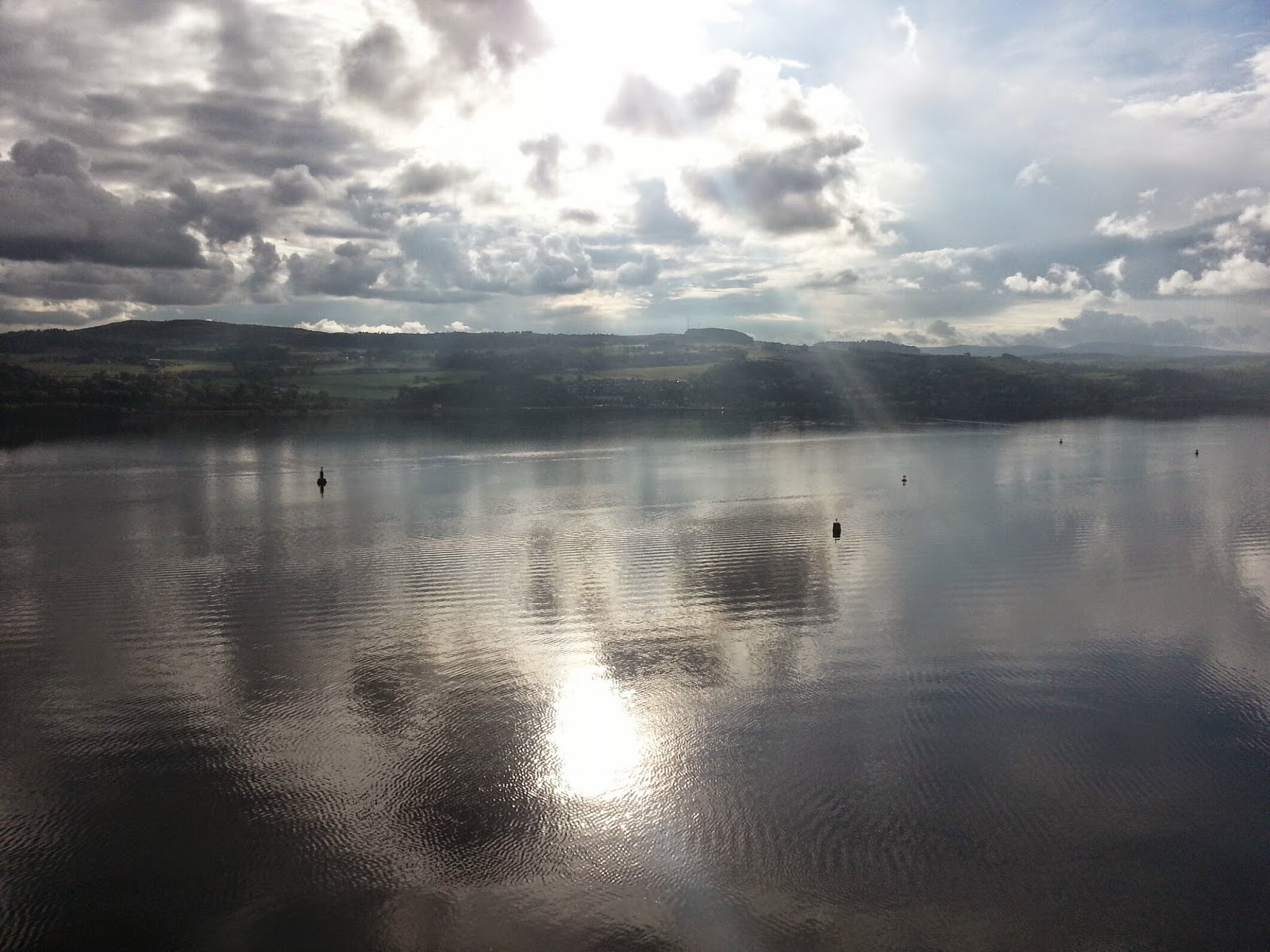 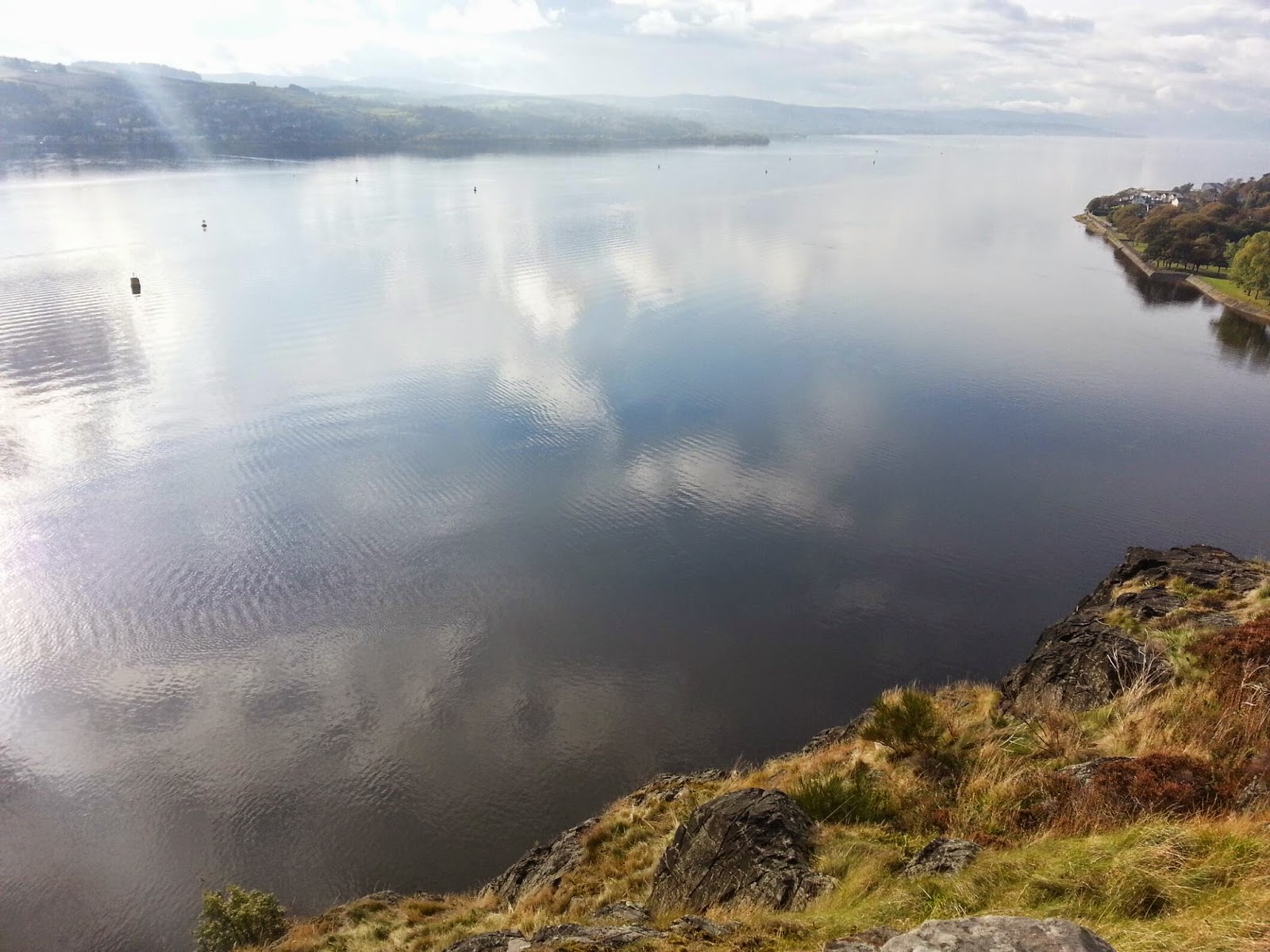 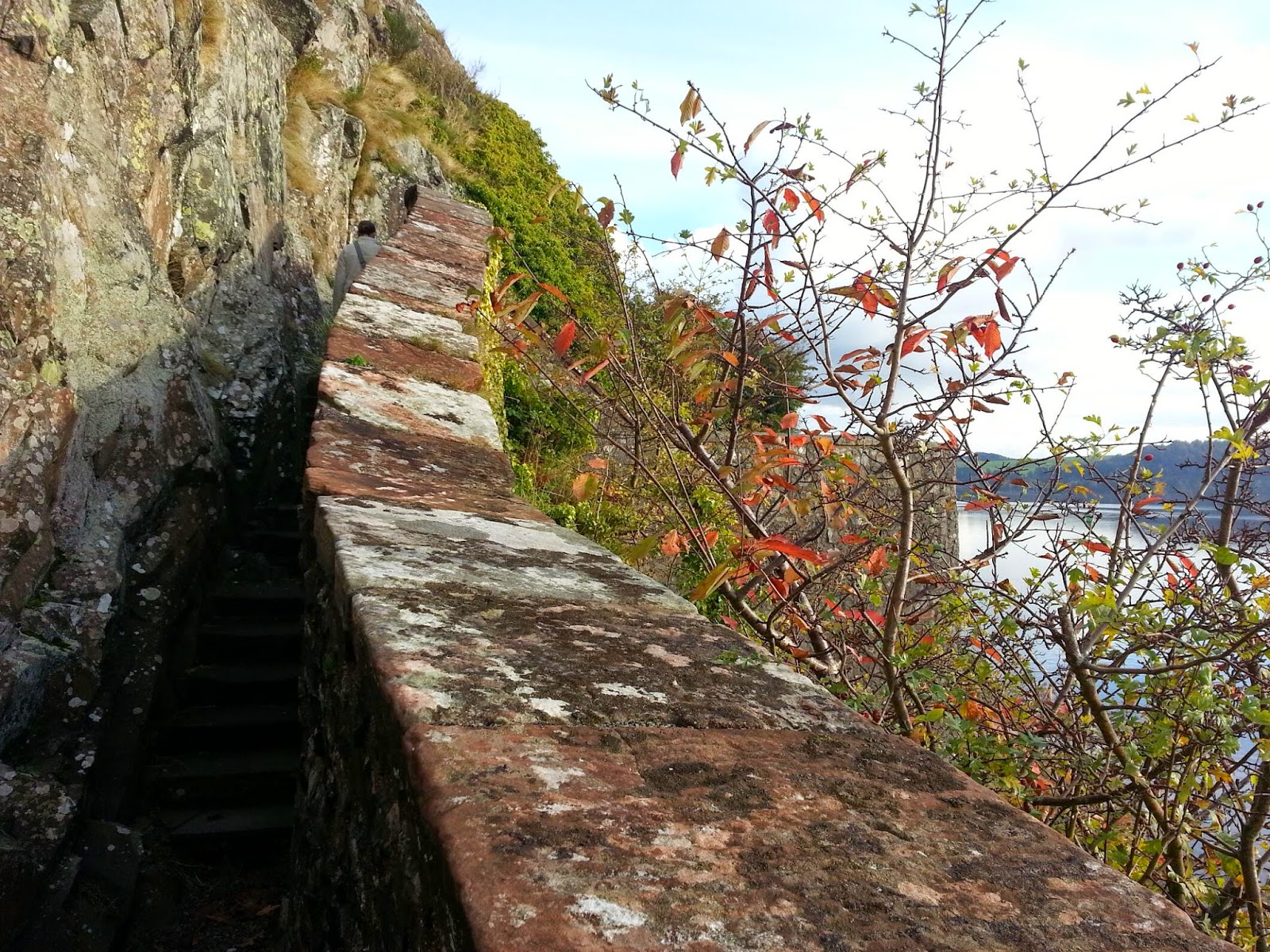 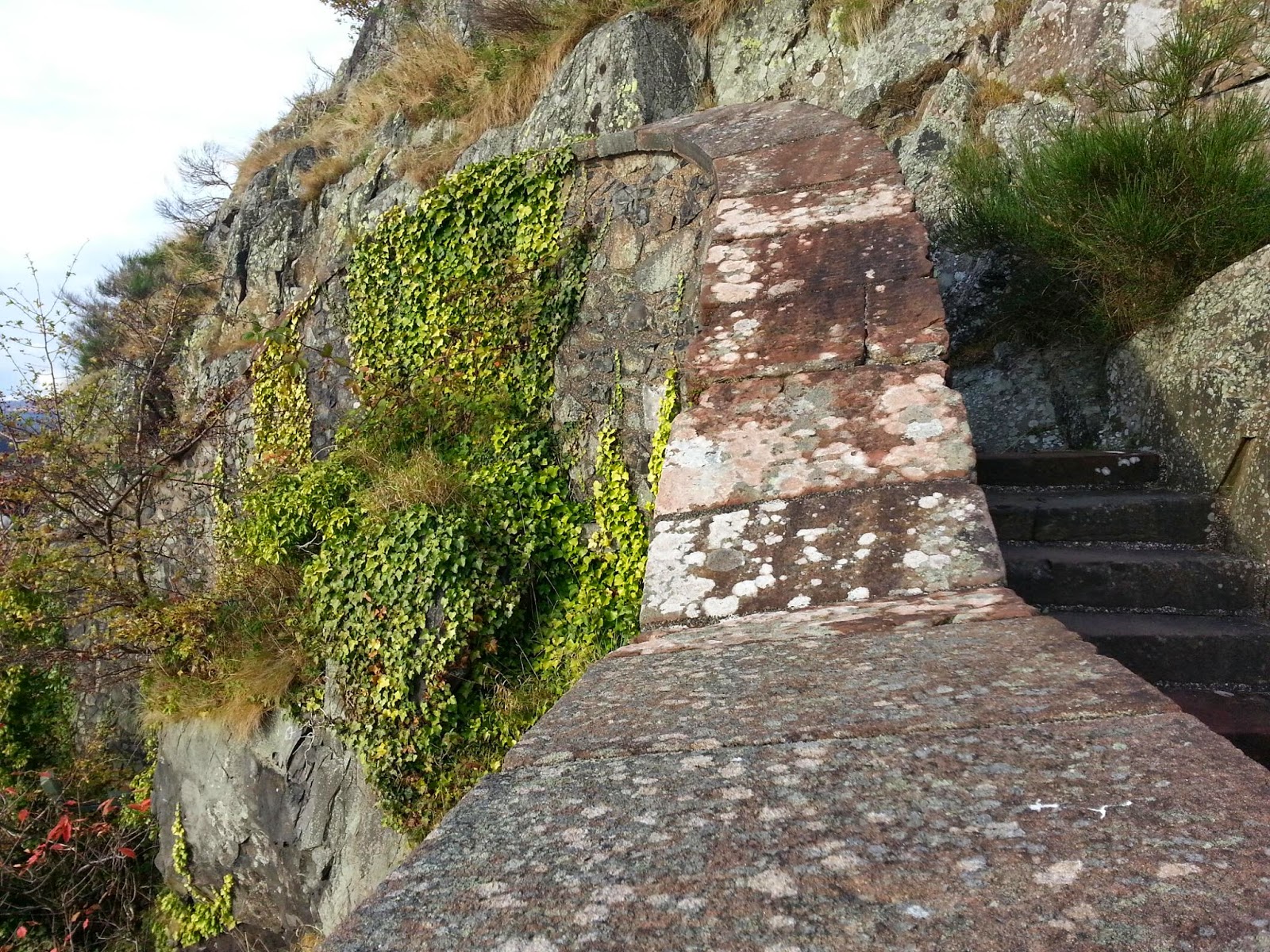 'Dumbarton', by the way, derives from the Gaelic 'Dun Breatann' - ‘Fortress of the Britons’. Before that, one-and-a-half thousand years ago, it was known as 'Alt Clut' - ‘Rock of the Clyde’.

Dumbarton Castle is managed by Historic Scotland and costs £4.50 for adults, £2.70 for children, £3 for concessions, free for Members. It's open throughout the year but check full details here - www.historic-scotland.gov.uk


Many thanks to ScotRail for their ongoing support of my project to explore Scotland by Rail.

Posted by Leo du Feu Painter of landscape and nature at 3:23 pm No comments: