I missed my December count because of recurring Achilles tendon problems, so it was great to be back on my regular route today. Other than a couple of short light snow showers the weather was mostly fair. At times the low winter sun even managed to break through the clouds.

I began my count at 8.50am, turned around at the Philpstoun Bings at 11.10am and got back to the house, count completed, at 12.15. My cereal pot this time was eaten on the move, feeling a bit too cold to sit and breakfast at my usual spot overlooking the flood field, and too hungry to wait that long anyway.

I was watching the canal even more closely than normal, having seen last Thursday an otter in the stretch right behind my house. I've never before seen an otter in the wild and had certainly never heard of one in the Union Canal. No sign of it today.

No sign of many waterbirds either! Excluding gulls I saw only 16 that were eligible for my count. A poor show indeed. The canal wasn't iced at all but I wonder if a row of several below zero nights had put birds into hiding or made them fly elsewhere in anticipation of a freeze.

The flood field was largely frozen and there were only 12 individual birds to be seen, compared to 355 last November. Also, its size has decreased significantly since my last visit in November. Despite a lack of waterbirds the rest of the landscape was alive - 38 bird species seen in total.

At one point on my return a huge gathering of gulls was far up, away over Linlithgow. Black-heads from ploughed fields. They formed a circling column in the sky. Like a squat cyclone that spun slowly anticlockwise. Slowly and steadily, hundreds of gulls together creating this massive form.

On and around canal:
moorhen - 1
mute swan - 1 (PCF, light green ring, black lettering. At St Magdalene's, Linlithgow)
dipper - 2 - on the burn beyond Philpstoun, as it runs under the canal bridge.

black-headed gull - 200+ (probably quite a lot more) - Due to field-ploughing beside the canal. They follow the tractors, raiding fresh turned earth.

common gull - I counted 2 amongst the black-heads but suspect there were quite a number more.

All other birds seen:
buzzard - 3 - In and out of trees beside the ploughing, seeming hassled by such a mass of gulls.

yellowhammer - 30+ - in trees and hedgerow and field around Park Farm. In mixed flocks with the following eight (in blue):

brambling - 4 - Not a close-up but nevertheless exciting! The first I've seen in 2013, and I saw none in 2012. These beautiful finches come from Scandinavia some winters and wow those who notice them with the plumage not unlike the chaffinch, but not the same. They have an orange chest colour that continues in wide streaks onto the shoulders and upper wings. A wide white rump patch shows as they fly their bouncy flight.

wren - walk along the towpath for any reasonable length of time and every so often one will were back or fore straight across the canal, only an inch or two above the water.

pied wagtail
raven! - Just one, but notable - only the second time I've ever seen one in the Linlithgow area. I heard its cronking call and looked up to see it passing over, very high above. Without that distinctive sound I'd never have noticed it. It flew a straight line east to west over the Springfield estate.


And definitely not birds:

Fungi and lichens fascinate me, although I know very little so far. In the books I've seen various drawings and photos of the Earthstar family and a few months ago I encountered a whole squadron of them - like pods from outer space, gathering in the leaf litter below a large stand of lawson cypress. I think this is the Beaked Earthstar, Geastrum striatum :


Small fungal growths that seem to climb this stump alongside creepers of ivy, like juicy white slugs on their way to feast:


Minute stub-ended fingers only a few millimetres long, emerging from deeply fissured bark on the horizontal branch of a nameless tree (my oversight, forgot to wonder what species it was.) : 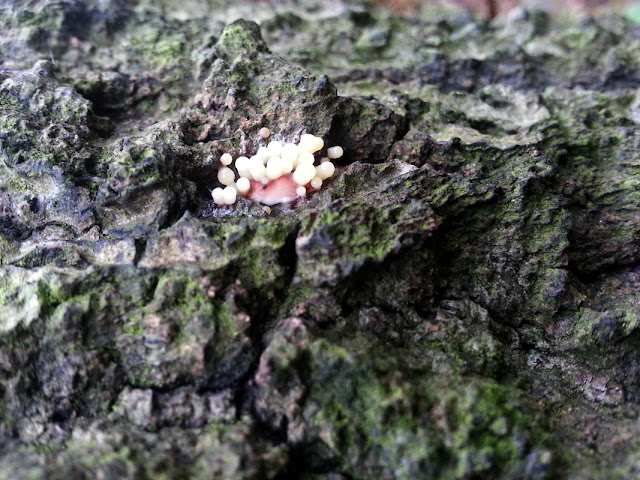 I'll put these photos on iSpot and update once I have the answers...


Posted by Leo du Feu Painter of landscape and nature at 3:55 pm