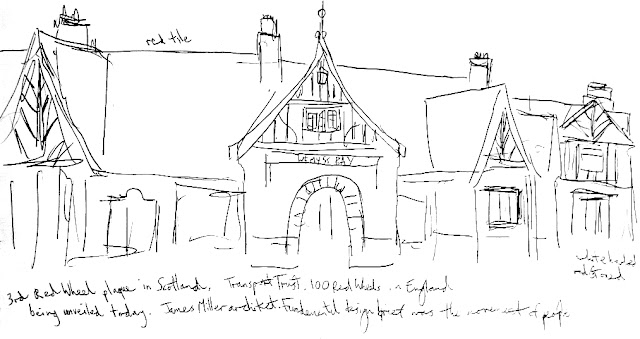 A Scotland By Rail day to Wemyss Bay on the Ayrshire coast. Attending a station tour and the unveiling of a new Transport Trust Red Wheel plaque. “The Red Wheel Scheme was created by the Transport Trust to recognise and commemorate the most significant sites of historicalimportance to transport heritage in the United Kingdom.” 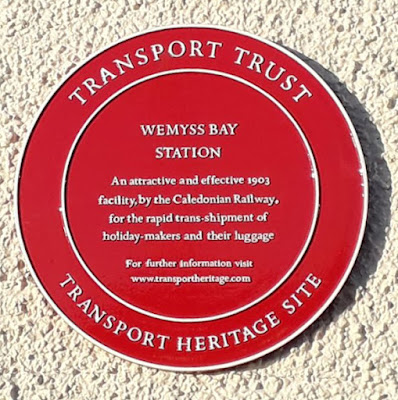 There are so far over 100 Red Wheels around the UK. Wemyss Bay is only Scotland’s third but is hopefully a sign of lots more to come. The other two are Glasgow, Paisley & Ardrossan Canal and GlenfinnanViaduct.


Trains from Glasgow Central to Wemyss Bay are hourly and as mine departed Central at 7.50am I was excited to be exploring a new stretch of line. When you start looking at how many stations you have or haven’t visited you realise there are an awful lot out there.

The Journey
After crossing the Clyde then passing through Cardonald, Hillington East, Hillington West, Paisley Gilmour Street and Paisley St. James there’s a short nice stretch through open farmland on your left (some of which is the former ROF Bishopton), airport on your right, then bending left to run along the south bank of the Clyde. Here it’s old industrial and houses and lovely glimpses across the water to another line which I do know well – Glasgow Queen Street to Helensburgh.

The volcanic plug of Dumbarton Rock looked impressive as I saw it for the first time from the watery viewpoint for which its buildings were presumably designed. Read my Dumbarton Rock blog post here. 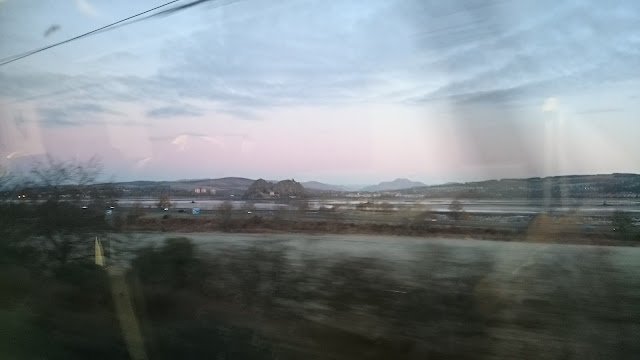 Grids of old wooden pilings in the tidal shallows.

That little peninsula, Ardmore, which we’ve been meaning to walk around for years.

Helensburgh where we were married. Behind it the hills where I do my BBS bird count. See blog post here. 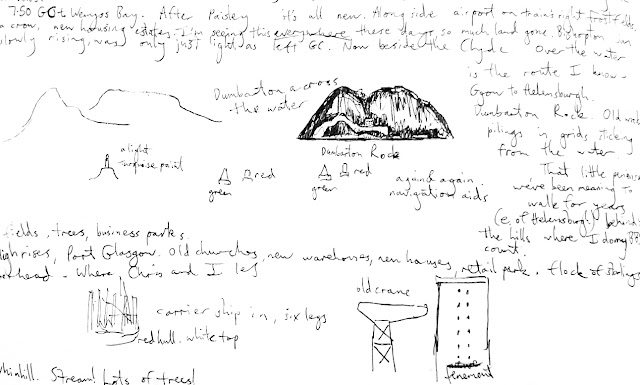 Greenock where Chris and I left for our National Trust for Scotland tour of the Scottish islands, including St Kilda, Foula, Orkney, Shetland.

Whinhill. A stream, lots of trees.

Train became busy with schoolkids over several stops. Emptied suddenly over one or two more.

Inverkip. I’d wondered about getting off here and walking the couple of country miles to Wemyss Bay, over the hill.

Bend sharply to the left for the final two miles south to Wemyss Bay. Looking across the water to Cowal peninsula and Dunoon.

Trees hug the track sides. Arriving into Wemyss Bay. There’s Bute and behind it the mountains of Arran… 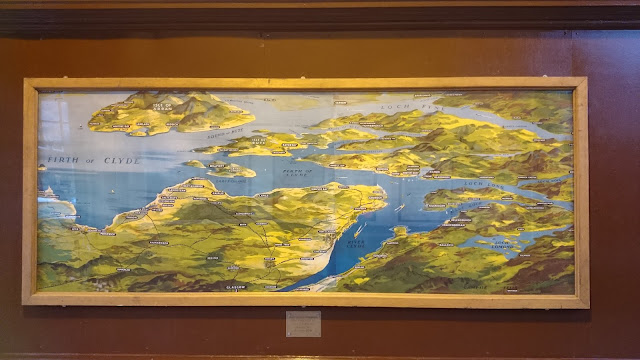 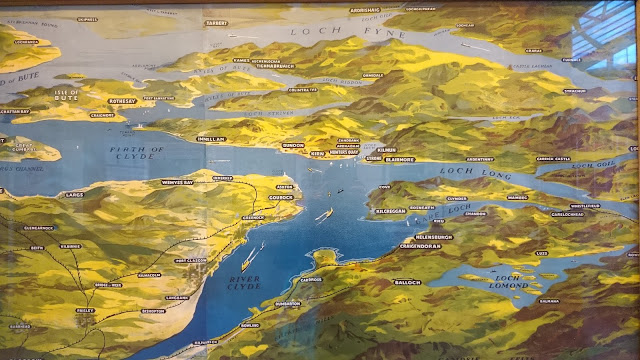 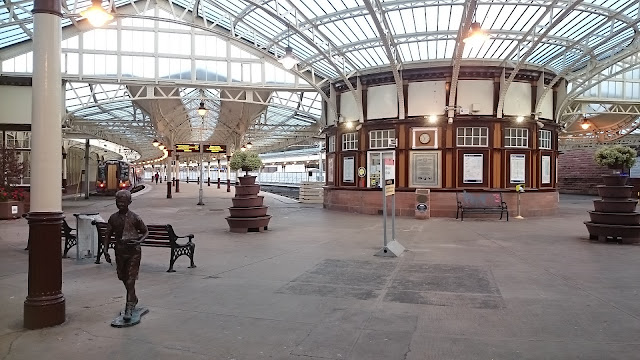 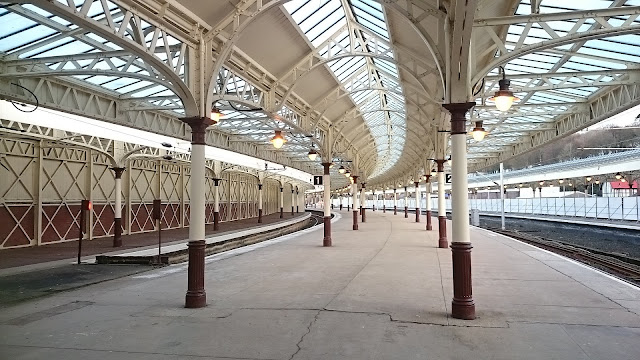 The first station was built at Wemyss Bay in 1865. Unusual as primarily for people rather than cargo it became a famous interchange for holidaymakers travelling from Glasgow to Rothesay on the island of Bute. For his 1903 rebuild of the station architect James Miller wanted to emulate highly successful systems for the movement of people which he’d seen in the States. The train-to-boat changeover was intended to take passengers and luggage no more than five minutes. Wemyss Bay’s newly unveiled Red Wheel plaque celebrates this achievement: “An attractive and effective 1903 facility, by the Caledonian Railway, for the rapid trans-shipment of holiday-makers and their luggage.” 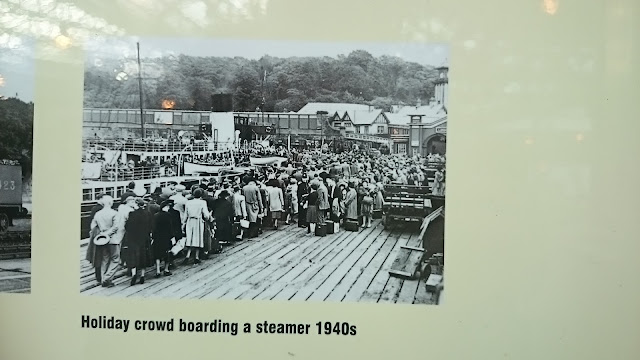 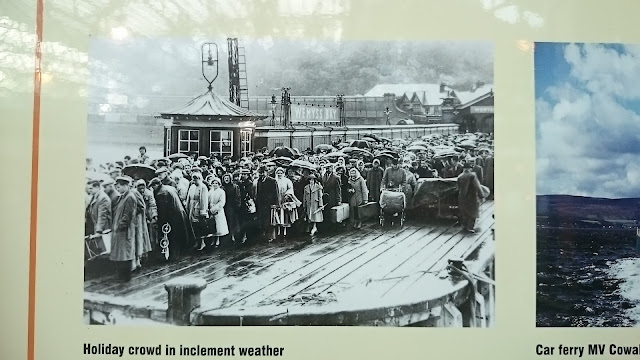 Explore the station and notice the old wood-beam-floored platform closest to the sea. This was for luggage. Luggage came out the right-hand doors of the train, passengers came out the left. The luggage was taken along its own platform, down a ramp and onto the waiting steamers. The passengers walked a grand wide curving downslope to their boat. Passengers and suitcases would be reunited in Rothesay. 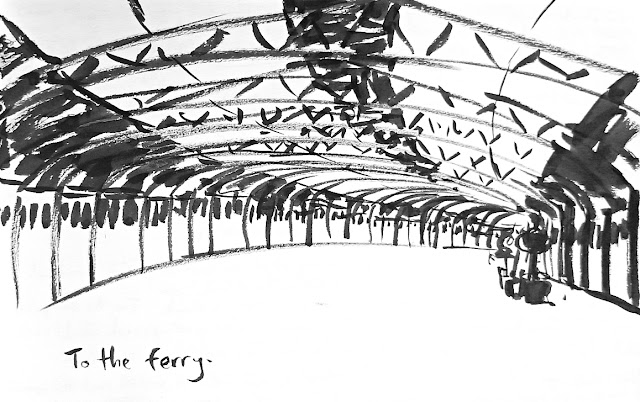 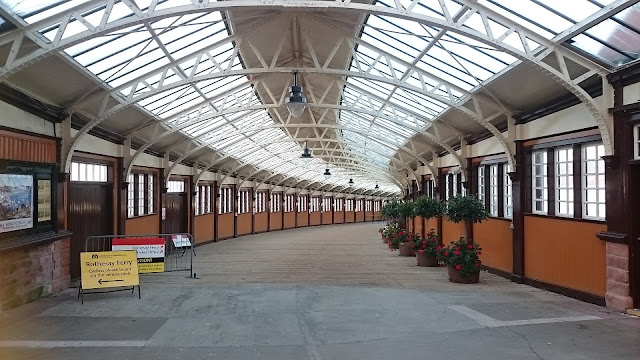 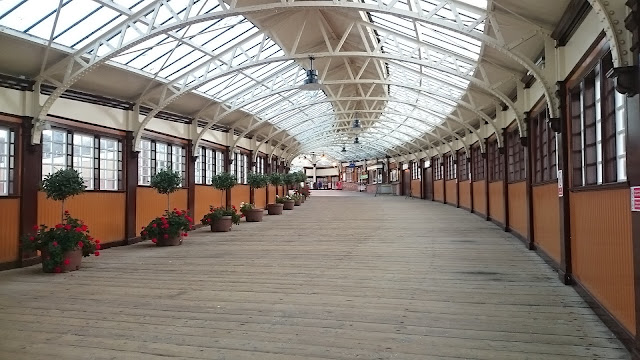 At the top of the slope is ‘Bobby’, a bronze sculpture by Angela Hunter. A young boy strides forward, shorts on, wooden boat held proud, ready for his week at the seaside. Bobby was commission by the Friends of Wemyss Bay Station and is companion piece to Angela’s young girl statue ‘Annie’ in Gourock, commissioned by Riverside Inverclyde Regeneration.

Even the urinals are curvy. 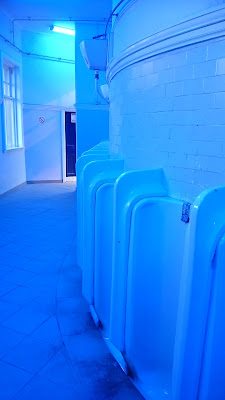 The Friends of Wemyss Bay Station is a very strong group which has done much for the building they so love, including their excellent second-hand bookshop with museum/archive and gallery/display spaces.

And there’s the station cafe. When I visited Wemyss Bay it was *literally* freezing outside and after only ten minutes of short shaky biro sketch watching the Bute ferry loading and departing I had to head inside to warm myself in the cafe with coffee and iced ginger cake whilst finishing my notes on the day so far. I bought a tea for my flask in preparation for the walk I planned up onto the moors. Then across the station concourse to the bookshop. 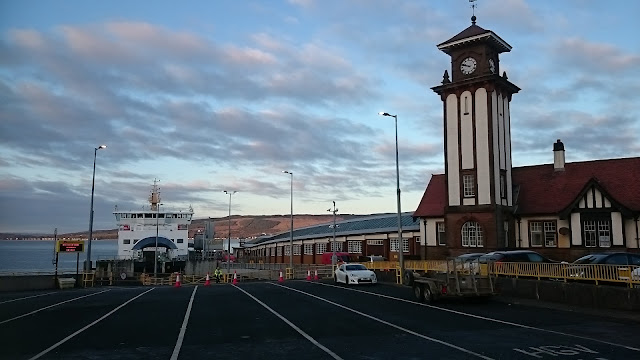 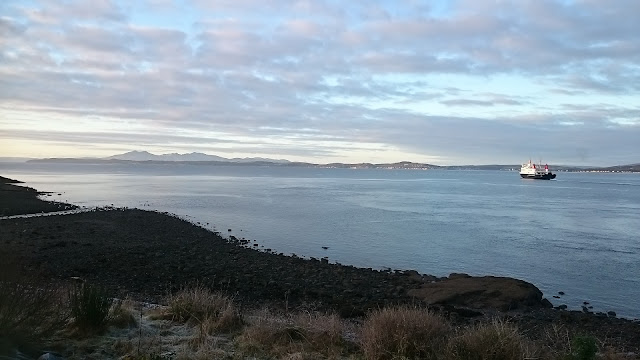 The bookshop is brilliant. I bought old art and rail and maritime postcards and had a good chat with Rita and Gladys, two Friends of Wemyss Bay Station volunteers. As well as lots of local knowledge they offered space to sit and stay warm in their museum/records room. Reluctantly I declined, I really had to make myself get out into the chill and up that hill. 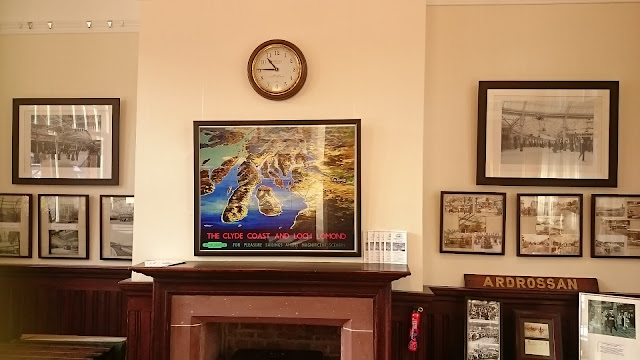 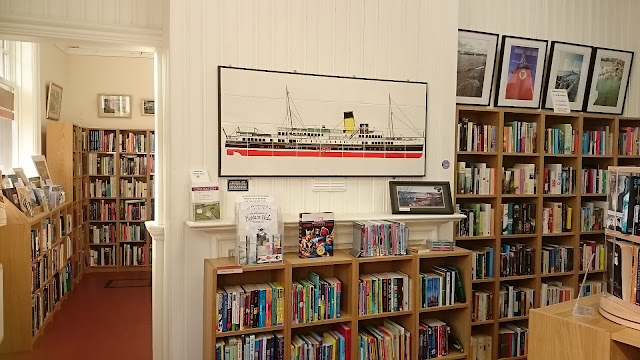 My next blog post will describe this four mile there-and-back walk from Wemyss Bay station up Kelly Glen and onto the moors at Kelly Reservoir: 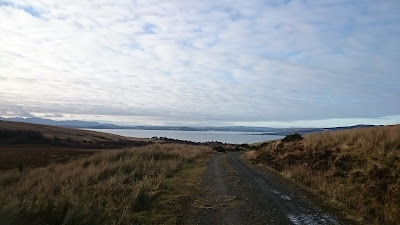 Many thanks to ScotRail for their support of my Scotland By Rail work.

Posted by Leo du Feu Painter of landscape and nature at 2:27 pm